The smartphone has some flaws, but the 7,000 mAh battery will definitely attract buyers.

Buy this phone only if you want a big battery smartphone with a decent camera for yourself, otherwise look elsewhere.

When the device in question falls under 30K, we automatically swing our heads towards the OnePlus Nord for comparison. That's the impression that the resurgent value proposition of OnePlus has created for itself in the Indian market these days. Samsung aimed to change that and with the Galaxy M51, it kind of has.

With a massive 7,000 mAh battery, the Galaxy M51 deserves to be the topic of discussion. This is the only smartphone offering such a huge battery in not just the mid-range, but across all price segments. Clearly, this will compel some buyers to go for this phone. But what about others? What else does this smartphone offer that can convince fence-sitters when a rival like the OnePlus Nord starts at Rs 24,999, offers a 90Hz refresh rate display, 33W fast charging and 48 MP triple camera? Dressed in a plain blue ‘glasstic’ material, the Galaxy M51 clearly looks very plasticky. Samsung has kept the look very simple — boring, even — with no gradient, just a plain blue back that is prone to scratches and smudges. It was practically made for a silicone case, but as always, Samsung doesn't include one in the box. It would have been nice. There’s a rectangular quad camera setup at the back tucked nicely in the top-left corner. It doesn't protrude much or look awkward, which I like. 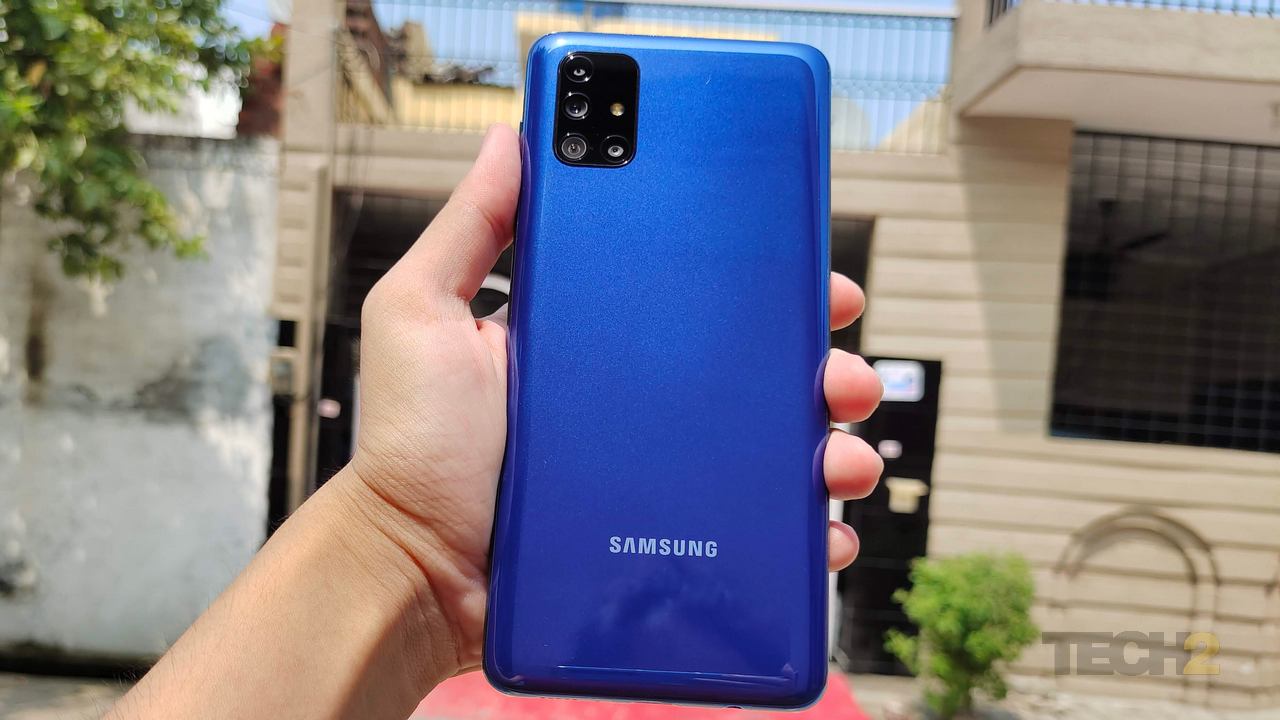 The Galaxy M51 features a side-mounted fingerprint scanner instead of an in-display scanner like its competitors. It responds quickly and it is placed just right. But there were multiple instances where I accidentally touched the sensor while holding it, unlocking the phone, so you will have to bear with that or get used to it. I know I didn’t. On the bottom edge, you get a Type-C port for charging, 3.5mm headphone jack and single bottom firing speaker. Image: Tech2/Priya Singh

The smartphone is kind of bulky (213 gm) which is expected since it holds a 7,000 mAh battery, but it is still handy. It won't slip from your hands, thanks to the glasstic material. If you are planning on using it with one hand, you probably should lower your expectations, because due to the heavy weight and tall size (it has a 6.7-inch display), the idea of single-handed use is pretty far-fetched. On the bottom edge, you get a Type-C port for charging, 3.5mm headphone jack and single bottom-firing speaker.

As long as you are not someone who hates using enormous phones, you are good to go. The design lacks oomph, so you will have to live with that too. I would've appreciated it more if the punch hole camera was placed in a corner and not in the centre. Image: Tech2/Priya Singh

There are downsides to a large phone, but the pros are clearly hard to ignore. Although, size and weight were less than comfy for me, watching Schitt's Creek on the Galaxy M51 was an absolute treat! The 6.7-inch AMOLED display played to its strengths and showed vivid colours and sharp images. It runs a 1,080 x 2,400 pixel resolution. Although I would've appreciated it more if the punch hole camera was placed in a corner and not in the centre, it wasn't a huge problem. The bezels are slim and sleek that add to the viewing experience. With 420 nits brightness, outdoor visibility will also not disappoint you.

The smartphone features a quad camera setup that houses a 64 MP primary sensor, a 12 MP ultra-wide-angle lens, a 5 MP macro lens and a 5 MP depth sensor. This is similar to what its predecessor, the Galaxy M31s had. Just as Sheldon said in his Galaxy M31s review, the camera setup performs quite well. With sufficient detail and good colour accuracy, the smartphone managed to capture good quality images. As for portrait shots, the edge detection, colours and clarity remained intact. However, I did notice that it blurred hair strands while producing portrait shots, but this is not a deal-breaker. The smartphone also manages to focus on the object quickly, unlike many other phones that I have tested.

Problems arise when you try to click pictures in low-light settings. Although the colour balance remained good, noise and hazy details were visible. When I compared the camera with the Vivo V20, the latter managed to produce more detail and sharper images than the Galaxy M51.

The smartphone runs on the Android 10-based One UI Core 2.1 operating system. It came with several pre-installed, irrelevant (to me) apps such as Chingari, Dailyhunt, Moj, MX Taka TK, Candy Crush and so on. That is definitely off-putting. It offers up to 8 GB RAM and 128 GB storage that is expandable up to 512 GB via micro-SD card.

It came with several pre-installed, irrelevant (to me) apps such as Chingari, Dailyhunt, Moj, MX Taka TK, Candy Crush and so on. Image: Tech2/Priya Singh

I did not notice any lag or heating while playing games or scrolling long documents, my Instagram feed or watching YouTube videos for long hours. Moreover, even with a single speaker, the audio is loud enough to listen to songs without being very close to the handset.

With a screen as big as 6.7-inches (the same size as the iPhone 12 Pro Max), loud audio and a 7,000 mAh battery, Samsung could have included a few multitasking features in this handset and called it a tablet!

Battery life? It doesn’t get better than this

A 7,000 mAh battery is the biggest selling point for this smartphone. While it does take around two hours to charge fully, I’m sure you’ll go at least 24 hours between charges. In my experience, after listening to songs on Spotify, continuous use of Bluetooth for a fitness tracker, playing Angry Birds, watching a couple of episodes of Schitt’s Creek, regular texting and attending to phone calls, the battery reached 60 percent by bedtime.

Since we dont need to go out a lot these days, it offers much more than my 2020 battery-life expectation. Even once it all goes back to normal (the new normal), you might feel pretty good about this phone.

The Galaxy M51 holds its own among rivals

If you are someone whose patience wears thin when it comes to charging a phone, this is a good option. You’ll have to live with staid looks and bulk. This smartphone will be an absolute treat for people who love spending long hours on Netflix binge-watching shows and movies.

If you are ready to splurge a bit and are looking for an all-rounder smartphone, the OnePlus Nord is still a tasty pick.