The Samsung Galaxy M32 promises plenty with an AMOLED screen and long-lasting battery, but is lacking in several departments. 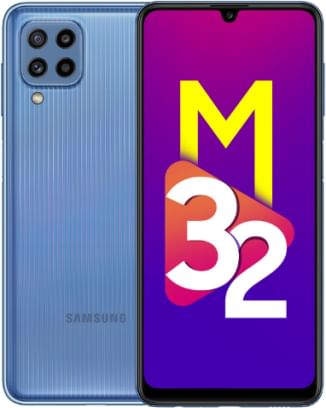 Samsung's latest budget phone offers a long-lasting battery and an excellent AMOLED screen, but disappoints with its camera quality and performance.

Samsung is undoubtedly the top smartphone brand in the world. That said, the Korean giant has been losing market share to the likes of Xiaomi in India. Much of this can be attributed to the competitive pricing of Chinese smartphones. In response, Samsung is betting on the success of its M series line-up that’s geared towards budget buyers. Its latest handset, the Galaxy M32, looks promising as it packs Samsung's in-house AMOLED display, a quad-camera setup and a massive battery. But does it stand a chance against the competition? Let's find out.

Samsung has no shortage of industrial design talent – just look at the Galaxy S21 Ultra 5G that recently won the Best Smartphone Award at GLOMO 2021. However, the Korean company's design prowess doesn't quite reflect at the budget end of the market.

The top and side bezels are reasonably thin, but the chin is quite thick. Image: Tech2/Chandrakant Isi

The plastic-bodied Galaxy M32 has an uninspiring design. The glossy back sports a vertical line pattern that reflects rainbow hues. Unlike Oppo, Vivo, and Realme that pull off innovative stuff with plastic and even make it appear like glass, Samsung's M32 looks and feels plasticky through and through.

The mid-frame is quite thick, and the faux metal finish doesn't look appealing. The quad-camera module almost sits flush with the back. However, the integration of the lone, rounded LED below the module isn’t aesthetically appealing.

Moving around the front, the Galaxy M32 has a dated, U-shaped notch to accommodate the selfie camera. The top and side bezels are reasonably thin, but the chin is quite thick. The power/lock button doubles up as the fingerprint sensor. The volume rocker offers proper tactile feedback, but is harder to reach due to its higher-than-normal placement.

The integration of the lone, rounded LED below the module isn’t aesthetically appealing. Image: Tech2/Chandrakant Isi

Overall, in terms of aesthetics and build, the Galaxy M32 is unique – but not in a good way.

The phone sports a 6.4-inch AMOLED display with a resolution of 1080 x 2400 pixels. It is an in-house panel from Samsung's display division, which is a global leader in mobile AMOLED screens. The display has an aspect ratio of 20:9 and a pixel density of 411 PPI.

Thanks to their emissive nature, the AMOLED panels can selectively switch off individual pixels to render inky blacks. With external backlighting such as LEDs out of the equation, an OLED screen delivers pure and vibrant colours.

The phone sports a 6.4-inch AMOLED display with a resolution of 1080 x 2400 pixels. Image: Tech2/Chandrakant Isi

Samsung claims the screen has a peak brightness of 800 nits. Looking at how well the screen holds under direct sunlight, there's no reason to doubt Samsung's claim.

The phone offers a quick setting to switch between 60 Hz and 90 Hz refresh rates. You also get to choose between Vivid and Natural colour profiles. On top of that, Samsung provides an elaborate option to manually fine-tune the intensity of red, green, and blue LEDs. Since a blue diode has a shorter lifespan compared to green and red, this feature can be extremely useful to restore the panel's colour accuracy after a few years of use.

The Galaxy M32 ships with Android 11, topped off with Samsung's One UI 3.1. The OS offers a fair degree of customisation when it comes to tweaking themes, the ability to toggle the app drawer, dark mode, icon layout and widgets. However, there's a lack of attention to detail. For instance, if you choose the 5x6 grid layout, all widgets go off-centre.

The Galaxy M32 ships with Android 11, topped off with Samsung's One UI 3.1. Image: Tech2/Chandrakant Isi

The phone comes pre-loaded with Samsung's Global Goals app created in collaboration with the United Nations. It promises to end poverty and ‘climate change’ by showing ads on your phone.

Since the Galaxy M32 is a budget smartphone, my expectations were reasonably grounded. And yet, the phone's Mediatek Helio G80 chip disappointed me with its underwhelming performance. The handset has a stutter that worsens as you load it up with more content. It lags even when pulling down the notification drawer or scrolling through the news feed. The app search feature takes a second or two longer than you’d expect to list a result. Apps reload when you switch between them.

These observations are backed up by synthetic benchmark scores. As you can see in the graph below, the Galaxy M32 lags in comparison to the similarly priced Realme 8 in PCMark Work 3.0.

In the more demanding 3DMark Wild Life benchmark, the Galaxy M32 is far behind the Realme 8, Narzo 30 5G and Narzo 30 Pro. The lack of power is noticeable while playing video games. In Call of Duty: Mobile, the Galaxy M32 only supports Low and Medium graphics settings. By default, the frame rate is set to Medium, and setting it to High causes the game to stutter.

Geekbench also paints a similar picture, with the Galaxy M32 struggling to catch up with the Realme 8 in both single-core and multi-core tests.

Only in the Sequential Write test, Samsung's budget phone edges past the Realme 8.

The phone has two SIM slots with support for 4G VoLTE. For storage expansion, the Galaxy M32 is equipped with a dedicated microSD card slot. The handset's network and Wi-Fi reception are spotless. Among other features, the fingerprint scanner is quick. The onboard mono speaker is quite loud, but a stereo setup surely would have been a great addition.

The Galaxy M32 has a quad-camera setup comprising of a 64 MP primary snapper, an 8 MP wide-angle sensor, a 2 MP macro and a 2 MP depth sensor. The 64 MP main uses pixel binning to produce 16 MP shots. During the day, the snaps deliver a fair amount of detail. The colours look natural, which might be appreciated by some, but they’re too bland for my liking. The 8 MP wide-angle camera does what it says, albeit with some noticeable barrel distortion.

The Galaxy M32 has a quad-camera setup comprising of a 64 MP primary snapper, an 8 MP wide-angle sensor, a 2 MP macro and a 2 MP depth sensor. Image: Tech2/Chandrakant Isi

The phone's camera can't hold its own in low light. Compared to other sub-Rs 15,000 smartphones from Realme and Xiaomi, the Galaxy M32's 64 MP camera produces excessively grainy shots. The dynamic range is disappointing. Moreover, light sources in photographs look smudgy. The dedicated night mode is slower and takes a couple of seconds more to capture an image, but that barely improves the results. The 8 MP camera is also inadequate and produces grainy pictures.

The 20 MP front-facing camera is quite good. For a selfie camera, it captures plenty of detail with accurate colours. Samsung has thrown in a portrait mode that works well. There's even a beautification mode that can trim the fat from your chubby lockdown face.

Moving onto video recording, the phone maxes out at 1080p with a frame rate of 30. In terms of detail, the videos look fine. However, even with EIS turned on, the videos look jittery. What's more annoying is the phone's jumpy focusing mechanism.

The handset holds a massive 6,000 mAh battery, which easily lasts over a day and a half on a single charge. This is impressive compared to other phones in this category. However, we can't provide comparison numbers because despite multiple attempts, PC Mark's battery life test failed to deliver a result on the Galaxy M32.

While the phone's high-capacity battery ensures you don't run out of juice often, when it does run out, the 15 W charger takes over two and half hours to top it up from zero to 100 percent.

The handset holds a massive 6,000 mAh battery, which easily lasts over a day and a half on a single charge. Image: Tech2/Chandrakant Isi

Samsung is focusing on the budget smartphone market, which is a great thing. However, it needs to up its game to catch up with the likes of Xiaomi and Realme. The Galaxy M32 has some high points such as an excellent AMOLED screen and a long-lasting battery. Unfortunately, it is let down by its feeble processor and disappointing low-light camera performance. Its design is nothing to write home about, either.

If you are looking for a sub-Rs 15,000 smartphone, the Realme 8 is a way better option. It offers a sleek design, snappy UI, better cameras and faster charging.