While the Redmi 8 is a great phone, it's overshadowed by the Redmi Note 8 and undercut by the 8A A good device overall, as long as you can make peace with its UI

Xiaomi is in the habit of launching devices in every price segment, allowing users the flexibility of picking a device that fits precisely in their budget. And given how well priced Xiaomi’s phones are, for users on a budget, it’s usually a question of which Xiaomi phone to buy rather than which smartphone to buy.

As far as the hardware is concerned, we know by now that Xiaomi will make the right call, and the Redmi 8 is no different. Starting at Rs 7,999, the Redmi 8 offers everything you’d expect from a sub-10k smartphone, including a dual-camera and 4 GB RAM.

That being said, I think Xiaomi is its own biggest rival here. I can tell you right now, the Redmi 8 is a great phone. But what I can also tell you is that the Redmi Note 8 Pro (review) is better, and costs just Rs 1,000 more. If you don’t want to spend as much, the Redmi 8A (review) is Rs 1,000 cheaper and almost as good.

If you’re still here, let’s take a closer look at the Redmi 8: 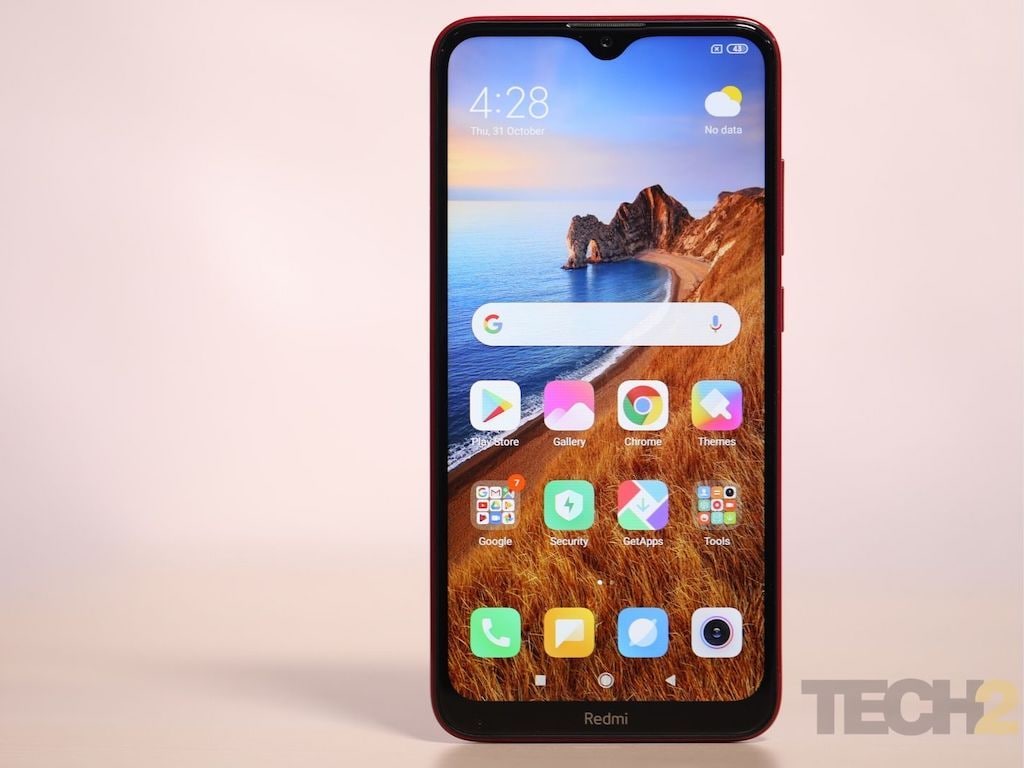 Redmi 8 features a water drop notch at the top and a thick chin at the bottom. Image: tech2/Suraj Chaudhary

A smartphone under Rs 8,000 has never looked so premium. In fact, the Redmi 8’s red colour variant looks a lot like the Redmi K20 from the back, except for that wavy shade the K-series phones have.

The back of the phone is curved, which gives you a good grip on the device. Typing on the phone with one hand is quite doable too. However, if you have tiny hands like mine, reaching the top of the screen while you grip the bottom half of the phone is not easy. You will either need the help of your other hand, or you will have to reposition your grip, which might also lead to the phone slipping out of your hand, because of the glossy back. Redmi 8 has a glossy back that looks great but is prone to a lot of smudges and scratches. Image: tech2/Suraj Chaudhary

You may also need a little while to get used to the position of the fingerprint sensor at the back of the phone. It would have been easier to reach had it been positioned slightly lower.

Also, while that back looks amazing, the rear of the Redmi 8 is highly prone to scratches and smudges. It would be ideal if you used the phone with the transparent case, which comes bundled in the box.

Up front, the Redmi 8 has a water drop notch and a moderately thick chin, which has the Redmi logo on it. There are also thin bezels on either side of the display.

Redmi 8 sports a 6.23-inch LCD display with an HD+ resolution. The colours on the display are sharp and it shows good contrast. The black levels are decent as well, and the legibility of the display is good even in bright sunlight.

The colour temperature of the display is a little too cool for me, and the Reading mode makes it too warm. 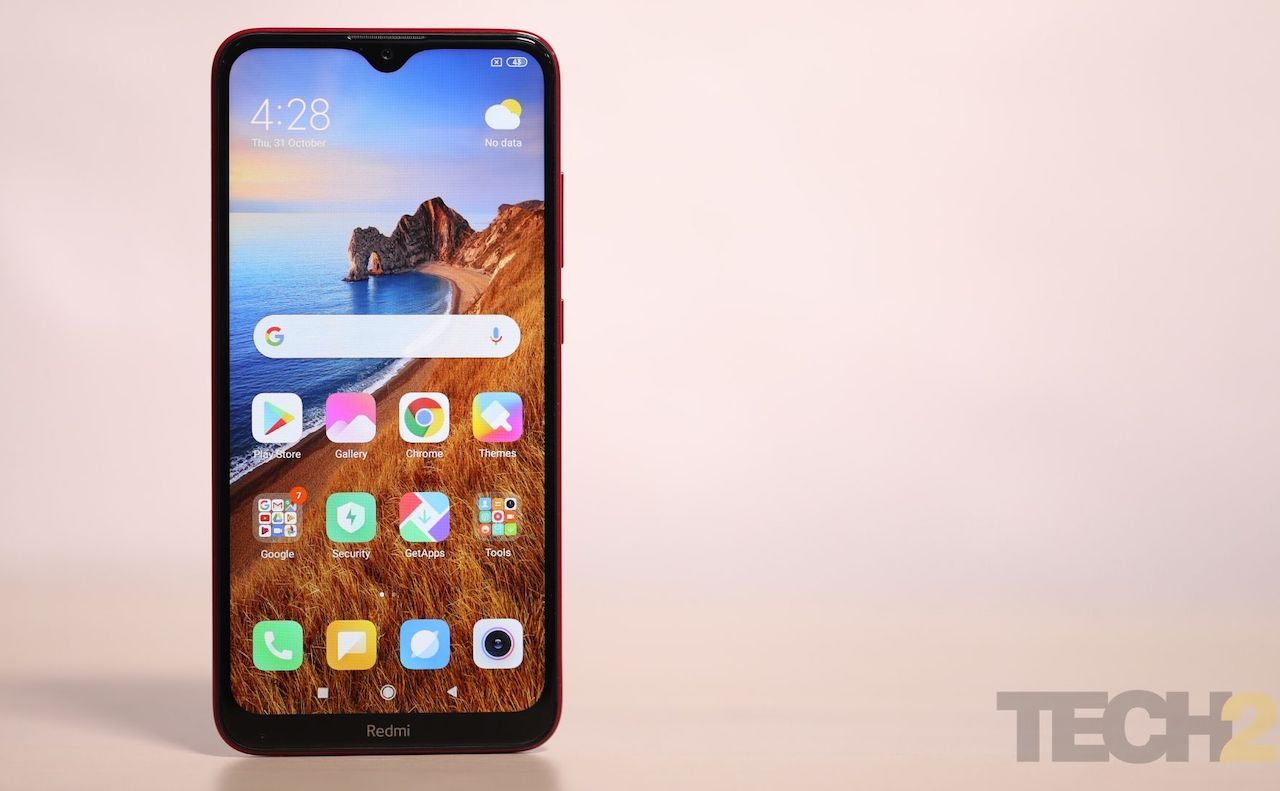 The smartphone is powered by Qualcomm Snapdragon 439 chipset and comes in 3 GB RAM and 4 GB RAM variants. I was using the latter. I found the phone freezing a bunch of times while launching a new app or when multiple apps would run in the background at the same time.

While I was reviewing the device, Redmi 8 received the MIUI 10.3.3.0 update, along with the September security patch, which did improve performance a bit, but the lag spikes didn’t disappear. 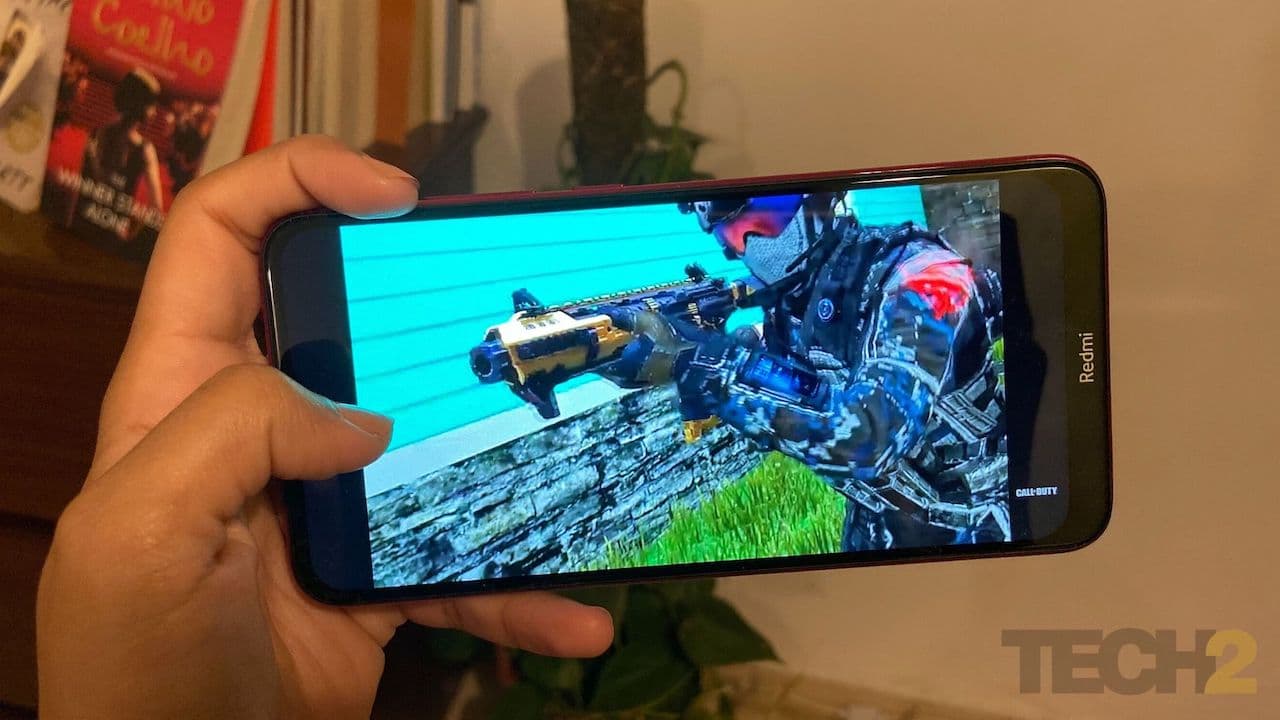 I played Call of Duty: Mobile on the phone, and when the game was launching for the first time, I almost felt guilty for attempting to launch the app. It took really long — longer than usual — to load the game. But once it did, gameplay was fine. I had to play the game on slightly lower graphics settings, but honestly, I didn’t mind that. There were also some frame drops from time to time, but they didn’t make the game unplayable.

Let's talk about the rear-cam photography first. The daylight pictures clicked from the Redmi 8 are quite good. The colours are quite close to natural tones and the overall pictures also look great, but when you zoom in you will see that the images don’t have a lot of detail to them. 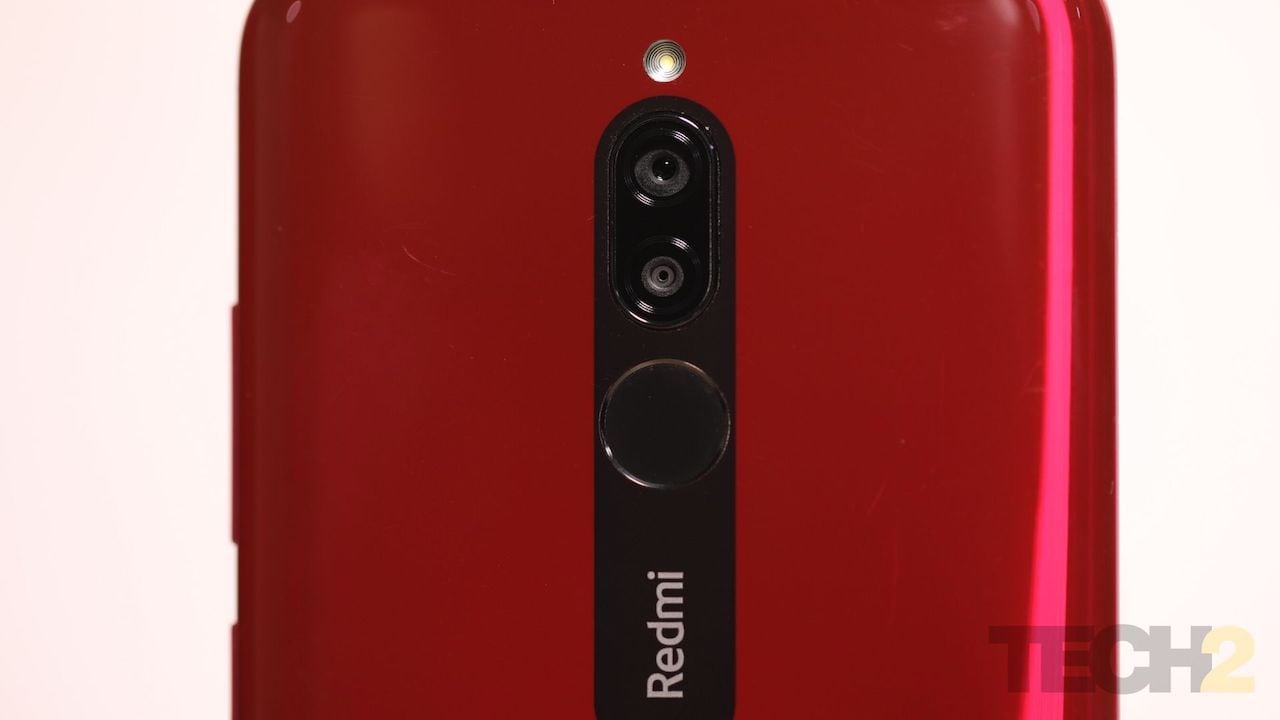 While the rear camera comes with autofocus, I did find the phone struggling with the focus sometimes. If you are someone who likes to click pictures on the go, then the Redmi 8 isn’t for you. You can blame the smartphone’s performance and the slow autofocus for that.

Daylight selfies are quite decent. If you keep your phone very steady, you will also get good details in the selfies. However, if you have shaky hands, it may take a few attempts to get a nice, steady shot. Daylight selfies also tend to look slightly over-saturated at times. 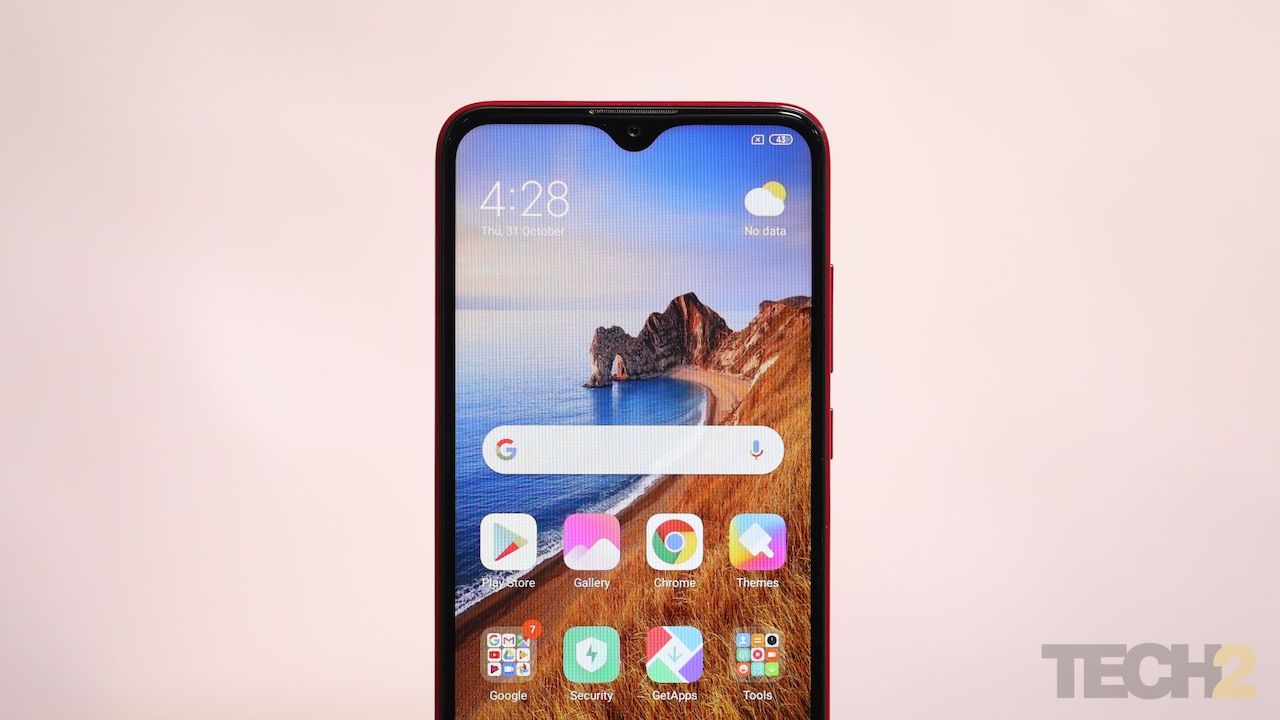 The Redmi 8’s camera has a natural depth effect, which is good but don’t bother with the portrait mode. I found the Redmi 8 consistently over-exposing the background, and edge detection is usually bad.

Redmi 8 also allows portrait shots from the selfie camera. In daylight, you get nice portrait images, however, zooming in, you will notice the edges of your ears and shoulders, and strands of hair, being blurred too.

Low-light pictures from the Redmi 8 are dull and grainy. They all have very soft focus.

Night photography from the Redmi 8 is also only tolerable. The phone tried to throw in a lot of light in the night shots, but that makes the colours look unnatural. There is also a lot of noise in night shots, and visible graininess.

The Redmi 8 allows video recording at up to 1080p resolution at 30 fps. At this resolution and frame rate, the videos look good, with ample amount of details and good colours, however, they seriously lack stability. The phone’s video quality is only decent if you are standing at one place and shooting in daylight. The stability in the selfie videos is slightly better but not perfect. The colours and details in it, however, are quite good.

You can check out some full resolution image and video samples of the Redmi 8 in the flickr album. Interestingly though, I also briefly compared the Redmi 8’s camera with the Redmi 8A’s, which I mentioned is a grand cheaper. And you can see from these few samples of selfies, low-light and night images that there isn’t a lot of difference in the camera quality offered by the two devices.

A low light shot with the Redmi 8 and Redmi 8A.

A night shot with the Redmi 8 and Redmi 8A.

Another cute-as-hell low light shot of my dog from Redmi 8 and Redmi 8A.

Selfies from the Redmi 8 and Redmi 8A.

One zoomed in picture shot from the Redmi 8 and Redmi 8A to judge the details in the images.

This means, if you are a little tight on the budget, you don’t need to stretch it to Redmi 8, at least for the camera performance. In some categories, you will actually find the Redmi 8A camera to be better, but it's up to you to decide whether it's worth the price difference.

Redmi 8 has a pretty good battery

The phone is fuelled by a 5,000 mAh battery which comes with support for 18 W charging. The adapter in the box, however, is of 10 W, but you can and should totally invest in an 18 W charger that Xiaomi sells separately for Rs 450. 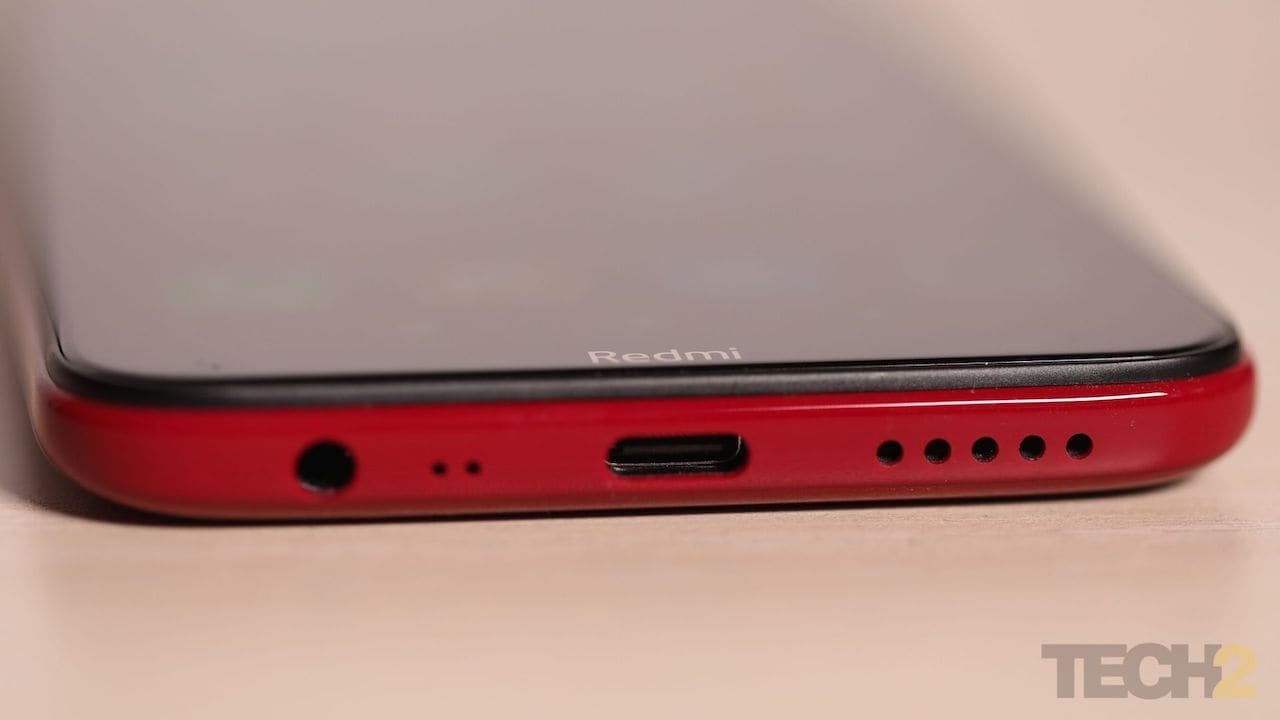 One of Redmi 8's highlight is the Type-C port and support for 18W charging. Image: tech2/Suraj Chaudhary

On moderate usage, which includes using a lot of social media apps, playing games for a few hours, watching a few videos and with some apps running in the background, Redmi 8’s battery would easily last you a day and a half. You can stretch that to two days if you have a lighter usage than that.

Charging the Redmi 8 from zero percent to fifty takes about 35 to 40 minutes. If you are someone who is always on the go, then maybe you should consider the 18 W charger that I mentioned above.

Redmi 8 runs MIUI 10, which is based on Android 9.0 Pie. And the problem with the Redmi 8 is the problem with every Xiaomi phone today, and that’s the cluttered, spammy UI. MIUI 10 lacks an app drawer, which leaves the app scattered everywhere. There is also a decent amount of bloatware, and to top it off, the spammy ads and lockscreen magazine detract from the user experience. Who should buy the Redmi 8?

Overall, the Redmi 8 offers you a great design, a good display, amazing battery life, decent cameras, and an annoying UI. Which means you actually get a pretty decent daily driver in the Redmi 8.

While the Redmi 8 a great phone, I still think it's worth shelling out just that little bit more for the more capable Redmi Note 8, though.