Realme X2 Pro Review: This is the flagship killer of 2019, and OnePlus should be worried

The Realme X2 Pro delivers hardware at a lower cost that’s only seen in the ‘premium smartphone’ segment.

The Realme X2 Pro brings the best in smartphone hardware with a decent-performing but flexible quad-camera system into an incredibly affordable package.

OnePlus has been historically pumping out smartphones since its first device, the OnePlus One, that deserved the ‘Flagship killer’ moniker when it had arrived. This tradition continued with its successive devices for a few years.

Xiaomi joined the race by launching the Poco F1 (Review) and then the Redmi K20 Pro (Review). Now, it’s Realme’s turn for glory.

The Realme X2 Pro packs the most powerful hardware that is currently available for smartphones. Whether it’s the chipset, display, battery or the camera, the X2 Pro does all of it but at a shockingly lower price point. 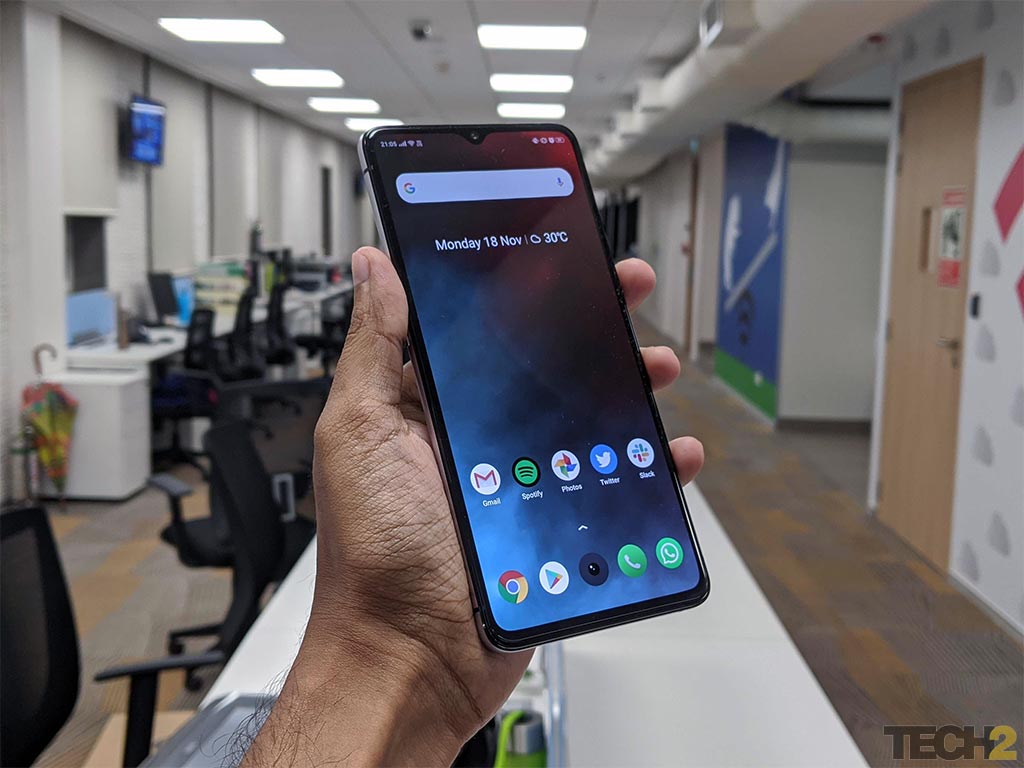 Powered by the Qualcomm Snapdragon 855+, it supports up to 12 GB of RAM and 256 GB of storage. The 64 GB variant comes with UFS 2.1 storage whereas the 128 GB and 256 GB variants use UFS 3.0. It’s 6.5-inch Super AMOLED display has a 90 Hz refresh rate and it supports HDR10+. Unlike its competitors, the X2 Pro has a quad-camera system on the rear that consists of a 64 MP Samsung GW1 primary sensor, 13 MP telephoto camera, 8 MP super wide-angle camera, and a 2 MP depth sensor. For selfies, there’s a 16 MP camera on the front. It packs a 4,000 mAh battery that supports SuperVOOC charging with the included proprietary 50 W charger. It supports fast-charging up to 18 W in USB Power Delivery and Quick Charge 4.0.

The phone is packed to the brim with the best of smartphone hardware (including a 3.5 mm headphone jack) that’s almost similar to the OnePlus 7T (Review) and the Asus ROG Phone II (Review). But does the phone actually perform as good as the competition? Let’s talk about some of the aspects in detail.

Build and design: Chunky and a fingerprint magnet

Smartphones with 6-inch displays are becoming quite common in every budget segment now. And by packing more powerful hardware and camera arrays, they tend to become bulky. While OnePlus managed to keep the 7T's form factor slim, that is not entirely the case with the X2 Pro. The device is slightly thicker and you will feel like there's a big slab in your pocket. Its form factor isn't drastically different from the 7T but the metal frame and the glass back have sharper edges on the X2 Pro. You will notice the bulk of the device when you're playing for an hour or talking on the phone for a long time. However, the build quality is great and Realme hasn't cut any corners in durability. The tiny notch on the top is eerily similar to the one on the OnePlus 7T. On keeping them side-by-side, it was difficult to tell the difference between the two. The X2 Pro comes with an in-display fingerprint sensor that is as fast as the OnePlus but Realme says that it's an upgraded sensor so it should be faster. It's difficult to tell the difference in speed with the naked eye. The rear panel looks impressive but it is a fingerprint magnet.

Smartphones that use flagship chipsets from Qualcomm rarely display any form of performance issues. It was the same on the Realme X2 Pro and I didn’t come across any problems. Switching between apps was a breeze, so was scrolling on several apps including websites. Zooming in and out of pictures didn’t display any lag. Gaming performance was also in the same league where graphics-intensive titles such as Asphalt 9: Legends and Shadowgun Legends worked smoothly. After playing Call of Duty: Mobile and PUBG: Mobile for half an hour, the device did get warm but not unbearably hot that it couldn’t be held. The skin temperature on the rear panel was cool enough to continue playing even more.

The display on the X2 Pro can get really bright just like the OnePlus 7T. However, the colours seem a little off when directly compared to the 7T and the ROG Phone II. It’s slightly on the cooler side with a bluish tinge visible in white areas. You can customise the tint of the display using a slider in the Settings and also adjust the temperature. However, it would have been great if the colours were calibrated out-of-the-box. This is nitpicky and you will still be able to enjoy good colours while watching videos. Although it’s said to support HDR10+, it’s only supported on YouTube videos for now. Netflix content that is available in HDR didn’t display the ‘HDR’ tag on this phone.

While listening to music using headphones, the volume levels were comparatively low on the X2 Pro. I generally listen to podcasts during my commute and I had to increase the volume all the way up to 80-90 percent to be audible enough. In comparison, I’d generally keep the volume levels at around 50-60 percent. This was also the case while making calls. However, the stereo speakers have good audio quality so watching movies and TV shows won’t be a problem. Vocals were clearly audible and the volume was high enough in a quiet room. 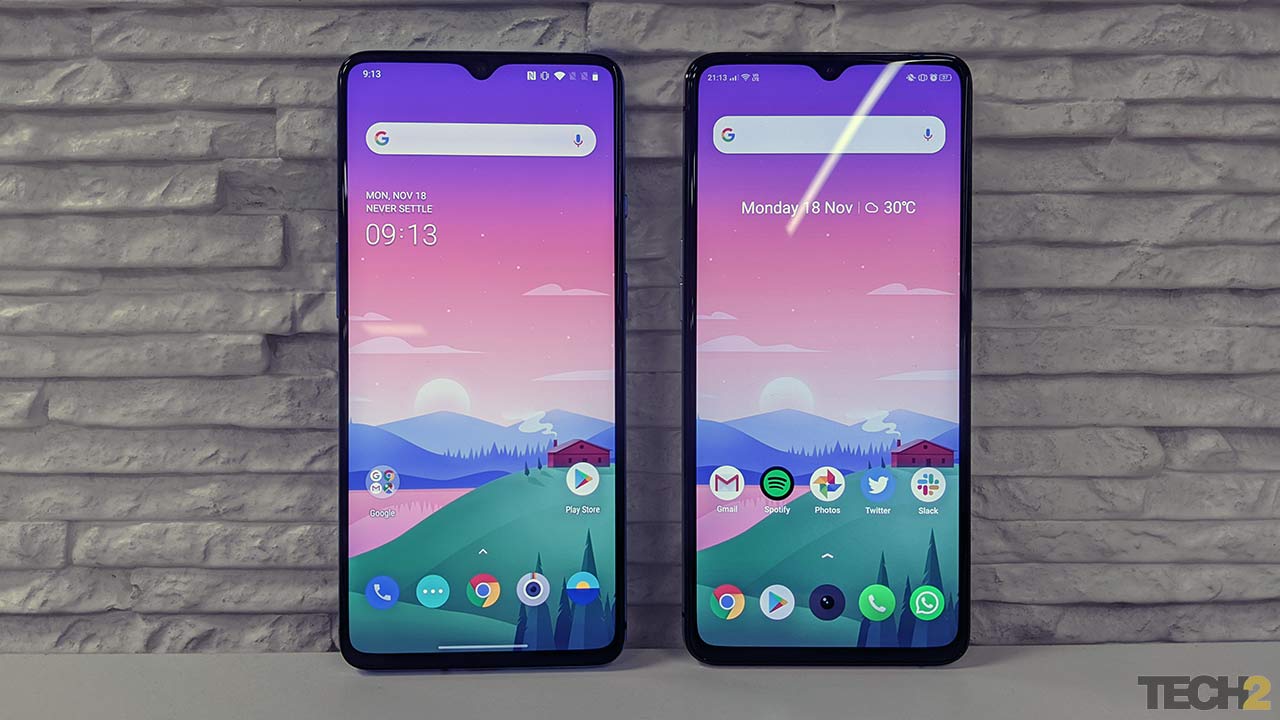 Software: ColorOS may not be for everyone

I’ll say it straight. I’m not a fan of ColorOS nor any of the custom skins on Android. As a personal preference, I’d always choose a stock or anything close to a stock Android experience. ColorOS is cluttered with too much bloatware but it isn’t as much as what Xiaomi bundles in MIUI. You still keep receiving unnecessary notifications from some of these pre-installed apps that have to be disabled.

Default apps on the phone are cluttered, especially the camera app. There’s no visible stuttering in the UI while scrolling or switching apps. Paired with the super-smooth 90 Hz display, you won’t really complain in terms of functionality if you like the overall looks. For me, the overly colourful and clunky icons aren’t appealing enough. The Realme X2 Pro comes with ColorOS 6 running on Android 9 Pie out-of-the-box that is disappointing. The company said that ColorOS 7 that will be launched in India on 26 November will introduce Android 10 along with a fresh look that should be close to the stock experience. We’ll only know better when it arrives.

Camera: Decent in the day, struggles in low-light conditions

When I opened the device, the first thing I checked was the camera. There is a lot of flexibility in taking different types of shots with the quad-camera system on the rear. It goes all the way up to 20x using digital zoom; allows you to take nice ultra-wide shots; portrait mode shots can also be shot.

The 64 MP primary sensor can take some really nice detailed shots when the subject is well lit up. In the day time, you can expect good details and balanced colours that aren’t over-saturated. Portrait shots aren’t impressive and more of a hit-and-miss. The separation between the subject and background came out well only when the edges were solid. Hair and objects are like spectacles would be partially blurred out and result in average portrait shots.

You can click on the camera crops/samples below to check out the high resolution or full resolution images. The selfie camera is decent and it can also take good pictures under artificial lighting conditions or indoors. Portrait mode is also available on the front camera and I found that it captured more details in this mode rather than in the normal mode. In low-lighting conditions, the camera struggles to capture details. The images don’t look bad but when you zoom in, the details are lost. It has a night mode, that’s also called Nightscape just like OnePlus. However, it isn’t as good. It does manage to tone down the highlights but the added exposure introduces noise which ultimately doesn’t look good overall. These shortcomings are only noticed when you zoom into the images and if you’re going to simply upload them as is, they still look good. 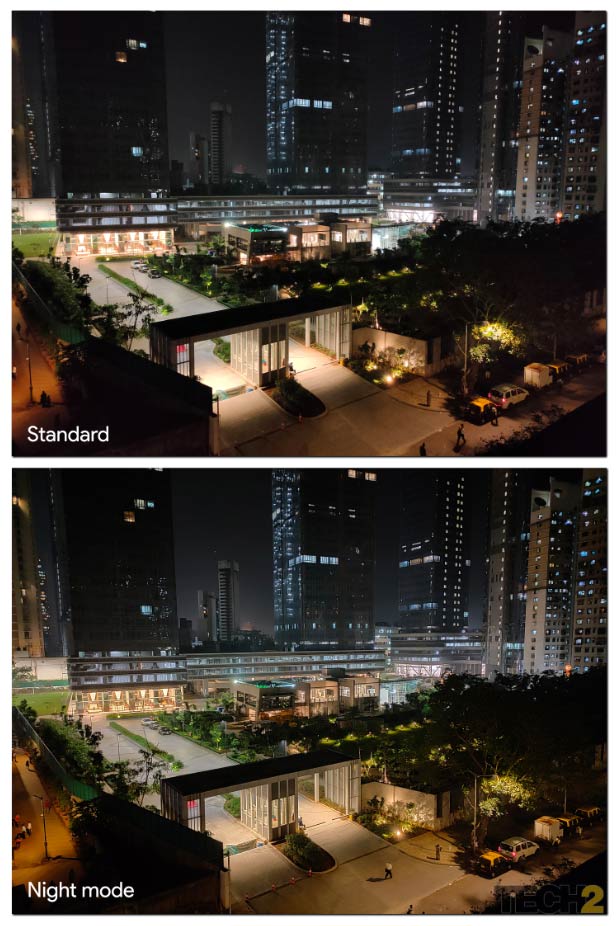 You can capture stable videos with the X2 Pro and it’s almost the same as the OnePlus 7T. The micro-jerks are compensated to capture smooth videos. However, it isn’t as smooth as videos recorded on the ROG Phone II. You can shoot videos all the way up to 4K 60 fps with the rear camera and 1080p 30 fps on the front.

Battery life: Mind-blowing but at what cost?

While I was curious to experience the company’s claim of completing a full charging cycle in only 33 minutes, I was also sceptical about how it affected the battery’s longevity. Fast charging is one of the best technologies that had drastically changed our smartphone-usage habits, unlike the older times where you had to wait for a couple of hours for the battery to fully charge.

Fast charging at this rate is still acceptable if the proprietary circuitry manages to dissipate the generated heat. However, the phone did get warm during our battery charging test and if this keeps happening frequently, it will take a toll on the battery. It doesn’t get alarmingly hot that you need to worry about the phone blowing up. Just make sure that you’re using the provided charger and cable every time.

While every smartphone manufacturer has implemented its own fast charging technology, SuperVOOC is claimed to be the fastest on the Oppo Reno Ace that comes with a 65 W charger. Realme packs a 50 W charger and it was able to charge the phone in 30-35 minutes. The charging animation where the battery percentage level keeps increasing continuously seems right out of a crazy dream.

It took 11 minutes to reach 50 percent of the battery level in one of the runs where the phone fully charged in 34 minutes. If you forgot to charge your phone overnight, you can simply plug it in while you do your morning routine. By the time you’re done, say in 15 minutes, you could have about 61 percent of battery to take the day.

While the OnePlus 7T series also offered nearly similar fast charging speeds, it doesn’t last as long as the X2 Pro. The difference isn’t significant and the latter will be able to offer an entire day’s charge even with some gaming and clicking a lot of pictures. 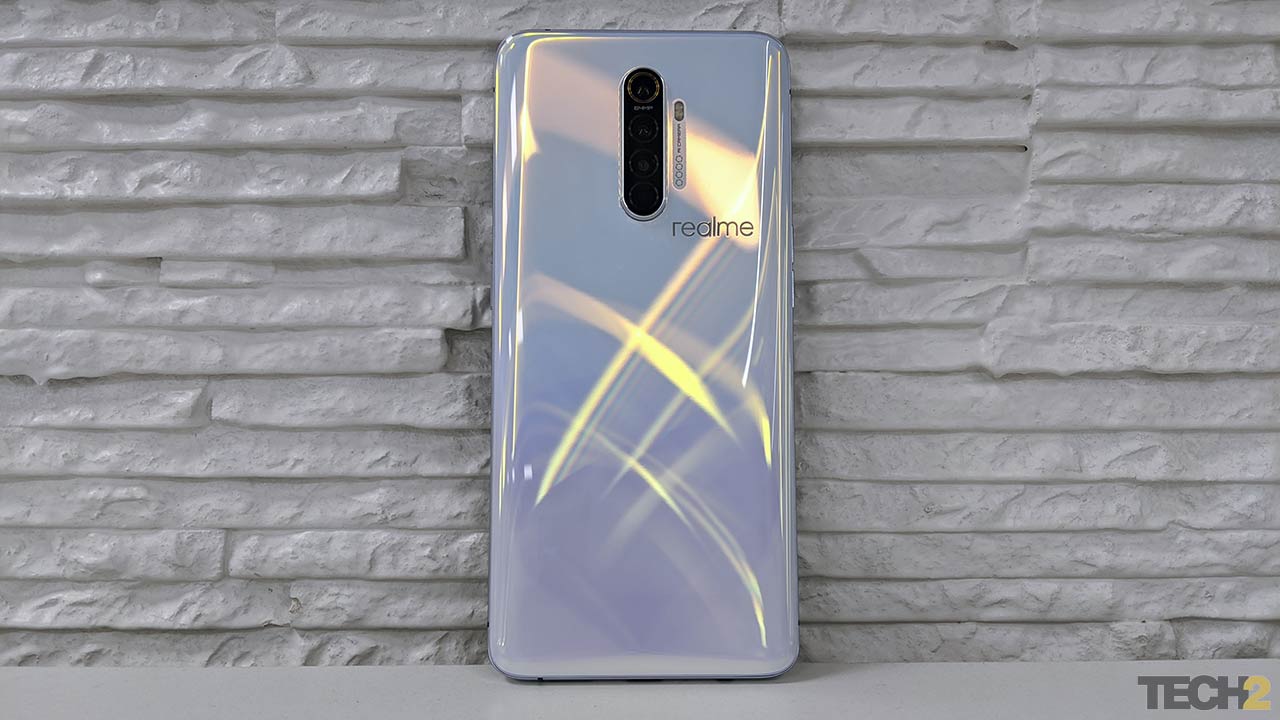 Verdict: Beating OnePlus in its own game

The Realme X2 Pro is the new flagship killer in town. Qualcomm Snapdragon 855+, 8 GB RAM, 128 GB UFS 3.0 storage, 90 Hz Fluid Display, and a quad-camera system with a 64 MP primary sensor, all packed inside the phone starting at an incredibly competitive price of Rs 29,999. This completely shatters the competition that is the OnePlus 7T and Asus ROG Phone II that have a starting price of Rs 37,999 for the same memory and storage configuration.

It only lacks behind both the devices in software and the camera department despite having better specs on paper. However, at launch, even the OnePlus 7T's camera had issues which were later solved with successive OTA updates. If Realme stays committed to improving the camera quality and software, it could also match up to them and emerge a better overall device. 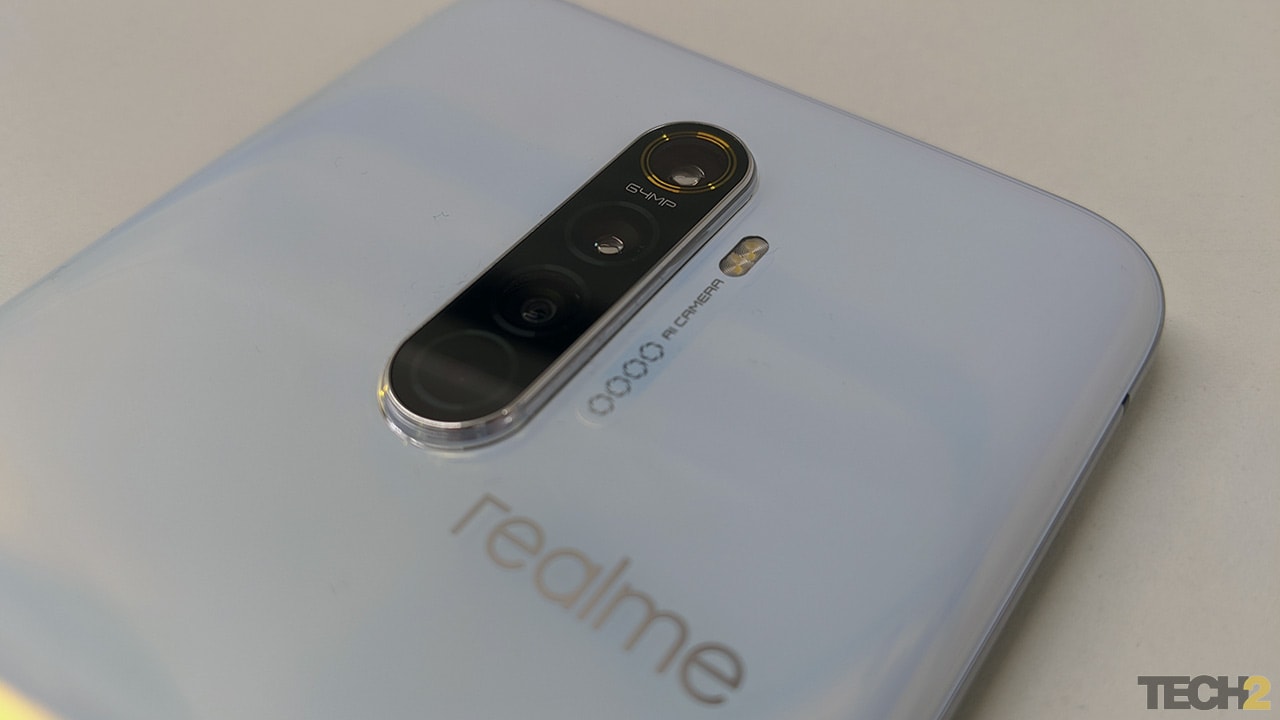 Do note that you will be paying Rs 8,000 less for the Realme X2 Pro and currently, it offers the best value for money with the monster hardware and camera system that it offers. There's a higher configuration with 12 GB RAM and 256 GB of storage that's priced at Rs 33,999. Another special edition called the Realme X2 Pro Master Edition that has a unique design is priced at Rs 34,999. The premium smartphone segment in India just got a lot interesting.