Oppo F11 Pro is easily the best looking phone in this segment, and it's packing a great camera. The Oppo F11 Pro is for buyers who are interested in owning a premium looking smartphone without the expensive price tag.

In the space of a year, Oppo went from embracing the notch to replacing it completely with a pop-up slider. And in a market literally flooded with phones, Oppo's bold design decisions have helped it stand out; the F11 Pro is no exception. It is indeed a refined design and can hold its own against the best in the segment. Having used the Oppo F11 Pro as my primary device for a little under a week, it has become increasingly difficult to find any reasonable flaw that might deflect buyers from this device. The truth is that for a price of Rs 24,999, the F11 Pro is a device that looks and feels way more expensive. The internals may be lacking a little in comparison to the phone’s exterior, but this is not a device that has marketed itself as a performance beast. It is, as most of Oppo’s phones are, a camera-first device, and a very good example of one.

Should you buy this device? If you love cameras and have a budget of Rs 25,000, and have an eye for how a phone looks, then the Oppo F11 Pro is for you. If you’re a PUBG fanatic, then you shouldn't be looking beyond the Poco F1. Allow me to explain.

Oppo is not slacking off when it comes to design. Having reviewed the F9 Pro earlier, I was happy to note that Oppo took the design forward with the F11 Pro: the mesmering back panel of the F9 now has a triple-gradient, which looks quite lovely on the Thunder Black variant we received. This is a phone which is extremely premium to hold, although I would have preferred a glass finish over the polycarbonate unibody design given to us by Oppo. The triple-shaded gradient is quite appealing to the eye.

The weight of the device is slightly on the higher side, but I don’t think the few extra grams matter. The dual-camera setup is aligned centrally with the flash on the phone’s backside, and so is the pop-up camera on the top of the phone. The polished edges do not cut into my palm and also give a grippy feel. The fingerprint reader, the Oppo branding and the ‘designed by Oppo’ text are all centrally aligned with the camera unit as well, giving the phone a very symmetrical look. Good job on the design, Oppo!

On the front of the device, we spot a notch-less display and next to no chin. Oppo touts a 90.8 percent screen to body ratio. The lack of a notch and a gigantic 6.3-inch FHD+ IPS LCD display always make for the best viewing experience in my opinion. 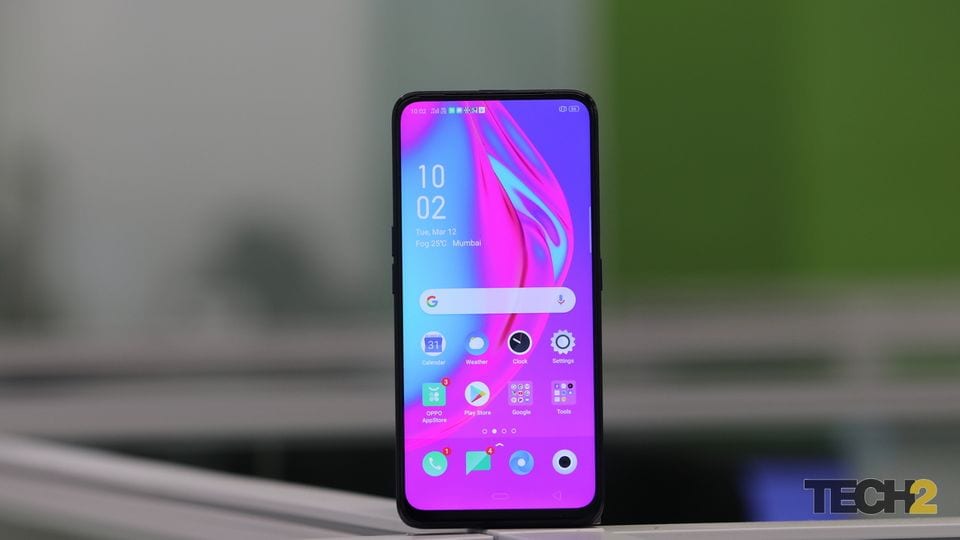 The phone’s display is neat and it leaves me with little to complain about. The colours are as accurate as I’ve seen on an LCD display under Rs 30,000, though there appears to be a slight oversaturation of reds and yellows. Regardless, the colours seem more real than on the Nokia 8.1 (Review), which is its nearest competitor, and also the OnePlus 6T (Review), which has a very oversaturated AMOLED display. The pop-out camera means that the phone has a notch-less display.

The display is not as bright as I would’ve liked, but even in brightly lit sunny conditions, the display was quite legible. It also dims enough in the dark to not hurt my eyes. Oppo also provided a blue light filter for night-time phone browsing. Overall, the display is great.

The 48 MP camera does a splendid job

To put it bluntly, Oppo’s 48 MP Sony IMX586 sensor has done a splendid job, but we must remind ourselves that the cheaper Redmi Note 7 Pro (Review) has the same sensor and it too did a remarkable job of capturing images. The dual-camera is symmetrically aligned with the fingerprint reader.

The F11 Pro has a 48 MP main camera and a 5 MP depth sensor, in which the latter is used only for background blurring to give DSLR-like pictures. By default, the phone uses a technique called pixel binning to produce relatively sharp, detailed 12 MP images from that 48 MP sensor. You can change camera settings to shoot at 48 MP if you prefer. I tried both modes and to be honest, I don't see much difference between the pixel-binned 12 MP shot or the 48 MP unbinned shot. All this is not to say that the F11 Pro does not take great pictures. It does, and in fact, it captures better colour and dynamic range than the competing Nokia 8.1. However, the colours are slightly oversaturated, but this has been trademark Vivo and Oppo for years. Exposure in the shots are also up to the mark and nearly equal to the Nokia 8.1. Video recording on the device is also up to the mark, with EIS on the device stabilising most of my shaky hand-held footage. The phone can only record 1080p and 720p a@30 fps.

Nightscape is something that Oppo had talked in its press briefing. In my opinion, the night mode on the F11 Pro was a hit and miss. While the phone can take photos which capture a lot of detail in low-light, there is a lot of noise in photos a well. The Nokia 8.1, while not having a dedicated night mode, captured more colour accurate photos even though exposure was understandably lacking. I expect that Oppo should improve Nightscape in upcoming future software updates.

The front camera on the device is a pop-up one and is very fast at that. It opens in a less than a second and takes the same time to go back down. Quality of the 16 MP front sensor is great, but you can see the Oppo brand of screen smoothing taking effect in almost every click. For those interested in a more natural facial look should look towards the Nokia 8.1. The selfie camera is fast and clicks good photos.

Check out the Oppo F11 Flickr album for high-res images The Oppo F11 Pro has decent internal specs but, as with most smartphones in this range, cannot compete with the Poco F1's hardware. Poco sacrificed design and build quality for power to get the hardware in this price range, and Oppo appears to have taken the opposite approach. The Helio P70 isn't the fastest of chipsets.

Inside the Oppo F11 Pro is a Helio P70 MediaTek SoC which is also part of the much cheaper Realme 3 (Review). Apart from that, the phone gives you 6 GB of RAM and 64 GB of storage with an option to expand using a micro-SD card.

Benchmarks show that the Oppo F11 Pro lags slightly behind the Nokia 8.1 and its Snapdragon 710 SoC, but in real-world use, both phones seemed equally fine to me. Chrome, Netflix, Facebook, Instagram, YouTube, and other heavy apps ran perfectly well without a hiccup, as expected.

The PUBG Mobile experience on the phone was nice, although I couldn’t play at max graphics settings due to processor constraints. As with most phones, including the liquid-cooled ASUS ROG phone, you start to notice a bit of lag after an hour or two of gameplay. It's not game-breaking, but it is noticeable. Asphalt 9, on the other hand, can run smoothly for longer periods of time. 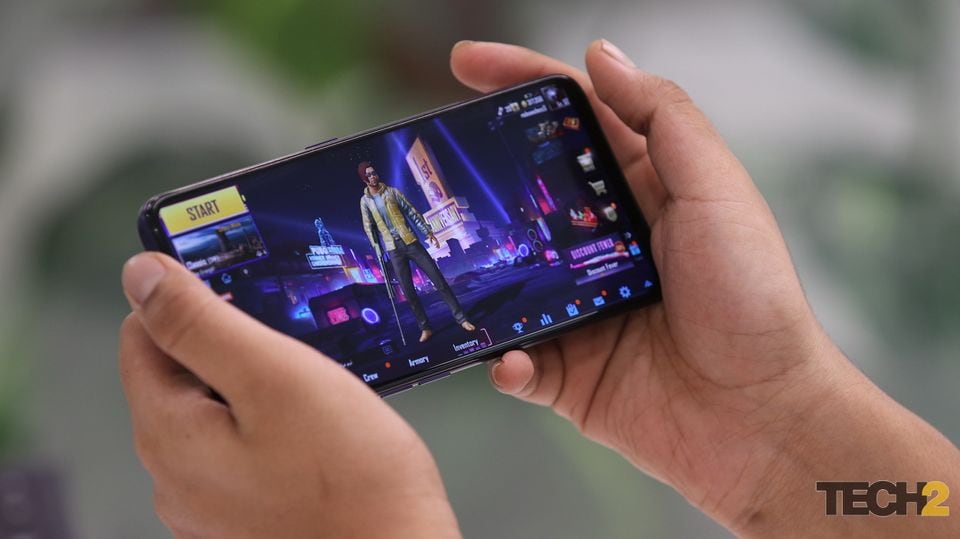 PUBG Mobile experience is quite nice on the phone.

The phone has a headphone jack (Thank you, Oppo). The single speaker at the bottom is not the greatest but is passable enough for in-room listening. Call quality was as good as expected and the earpiece functioned perfectly. Coming to authentication, the phone has a fingerprint reader which functions lightning fast. The face unlock system is no slouch either, with the phone unlocking itself long before the front camera finished popping up. Of course, the caveat here is that this is a single-cam face unlock, which means it's not secure and could be fooled by photos and video.

Software is a slight issue

While Oppo's software has improved greatly with ColorOS 6.0 (based on Android 9.0 Pie), there is still a lot that's in need of refinement. For instance, I’m constantly bombarded with the "sign-in to your Oppo ID" notification, and there seems to be no option to turn that off. There is little bloat as compared to the previous version of ColorOS, but the unnecessary Oppo App Store, an extra browser and a second messenger app are still there and can't be removed.

I do like the new UI however, with those big icons in the drop-down menu. There is also an app drawer, which is always a welcome feature for me. The point is that it may not be as clean as stock Android on the Nokia 8.1, but with time, you will get used to ColorOS.

I saw nearly five-plus hours of screen on time and binged through half the third season of Hannibal (it's a great show). The 4,000 mAh battery is doing its job and it is doing it very well. Battery life while playing PUBG was a solid two hrs. The phone doesn't seem to thick even though it has a 4,000 mAh battery.

The phone comes with Oppo’s proprietary VOOC fast charging system, which can charge the device from 0-50 percent in 30 minutes, which is great for a 4,000 mAh battery. Fully charging the phone takes about an hour, which happens to be 50 percent faster than on the Nokia 8.1, which, do note, has a smaller, 3,500 mAh battery.

It’s easy to recommend the Oppo F11 Pro to buyers who are interested in owning a premium-looking smartphone but don't want to dig too deep. I mean, you could place it side-by-side with the Pixel 3 and I can guarantee those who are not aware of the Pixel 3 (Review) will choose the F11 Pro. 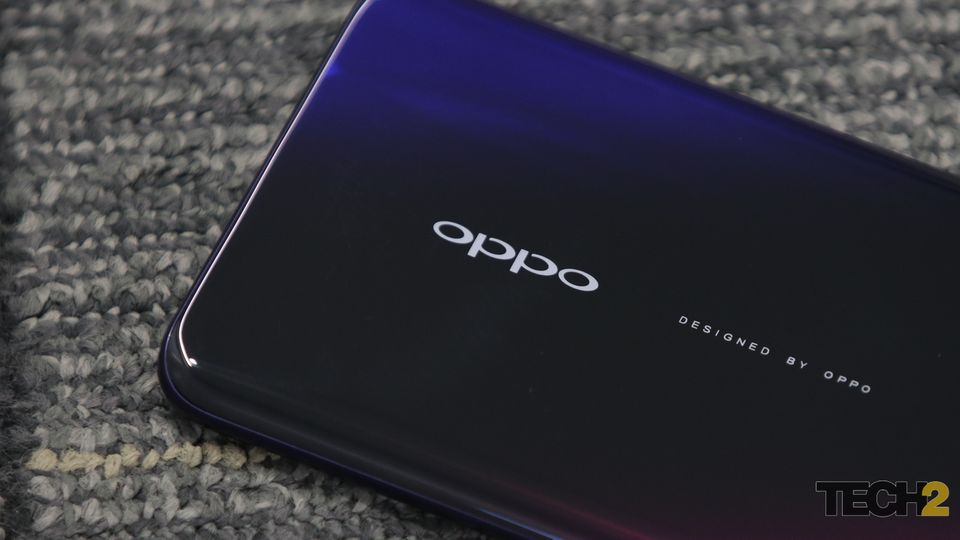 The Oppo F11 Pro is perhaps the best looking phone in the mid-tier segment.

The camera, display, and battery of the device all receive heavy checkmarks, but the performance and software could do with some tweaks.

Get the Oppo F11 Pro if you're a sucker for looks and appreciate a great display and a great camera. For performance look no further than the Poco F1, and if it's clean software you seek, you have the Nokia 8.1.