OnePlus 7T Pro Review: 'Pro' features are great, but the cheaper 7T is almost as good

The OnePlus 7T Pro just got more powerful, carrying the same amazing display as the 7 Pro and an improved camera. The OnePlus 7T Pro offers the most powerful hardware components with a gorgeous display and a decent camera.

OnePlus' foray into the premium flagship segment of smartphones earlier this year began with the launch of the 7 Pro. It packed the best hardware that Android phones had to offer at the time and managed to deliver some "Pro" features when compared to the OnePlus 7 that followed. Features like a notch-less display with a 90-Hz refresh rate, curved screen and a triple rear-camera setup did justify the massive price bump, but the camera failed to match expectations, leaving fans a bit disappointed.

With the OnePlus 7T Pro, has OnePlus managed to address the few issues and established itself as the maker of a proper, premium smartphone, one that can go neck and neck against Apple and Samsung?

The OnePlus 7T Pro is an incremental upgrade to the 7 Pro. Most of the changes are under the hood. There's a new SoC, the Qualcomm Snapdragon 855+, which is an overclocked version of the original. The triple camera setup on the rear has new shooting modes and that's about it. Since the phone comes with OxygenOS 10 based on Android 10 right out-of-the-box, you’re getting the latest customisation features and improved gestures. The 7 Pro also received a software update, so all those features are now available on the previous phone as well. 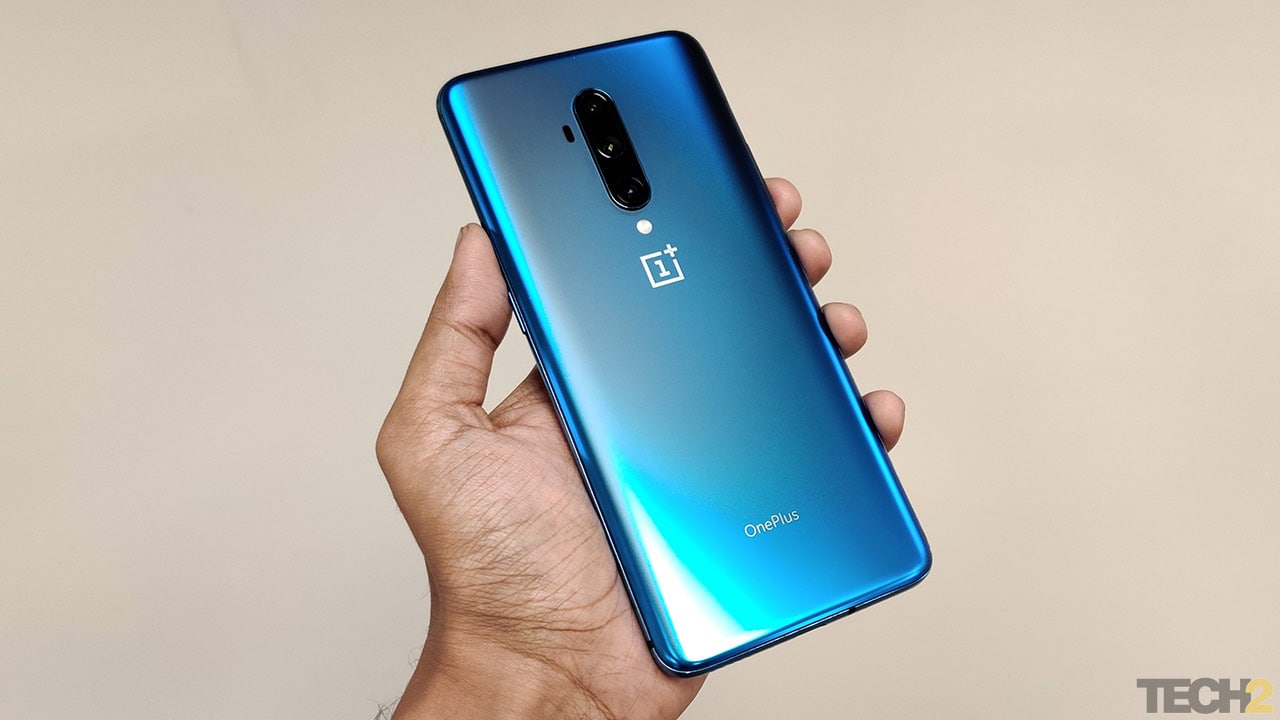 There’s only one variant this time in the 8 GB + 256 GB (UFS 3.0) configuration, and in a new colour that they’re calling Haze Blue. Additionally, the company also released a McLaren edition that comes with 12 GB of RAM which has Papaya Orange accents (including software customisations) and a special rear panel design. It costs Rs 58,999 and it comes with a special case as well.

The OnePlus 7T Pro packs the most powerful mobile chipset in the Android world and naturally, its performance is exceptionally good. You aren’t going to face any kind of stuttering or lag in games unless you’re using a poorly optimised app. On top of that, the phone runs on the best version of Android in the form of OxygenOS 10.

I played a lot of games including Asphalt 9: Legends, Injustice 2 and PUBG Mobile. The graphics settings could go up all the way to 60 fps with HDR enabled. There were no hiccups at all. However, the curved display was an annoyance to me as it’s uncomfortable to hold the device in the landscape orientation. Attaching a case gives you a better grip. The phone tends to get warm like every other phone while gaming, but you will still be able to hold it and continue playing. This was after playing PUBG Mobile continuously for an hour. 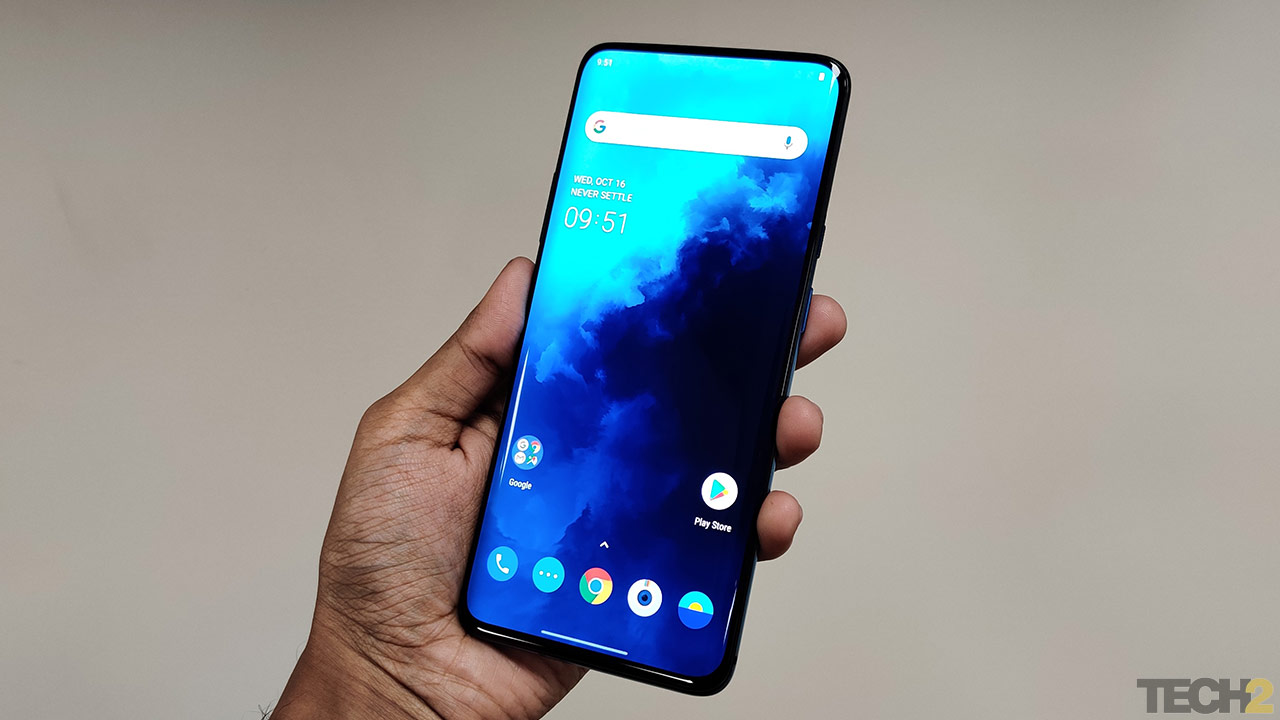 The curved display on the OnePlus 7T Pro may not be comfortable for everyone. Image: tech2/Abhijit Dey.

Whether you’re playing games or watching videos, you will absolutely love the display on this phone. With no notch on the top, you get the entire screen for content in games, and a cropped version in videos. The 90-Hz refresh rate will spoil you and the vibrant colours of the display are amazing. It has a QHD+ resolution (1440 x 3120 pixels) that can be set down to FHD+ (1080 x 2340 pixels) or to auto-switch to the appropriate resolution. To add to that, the dual front-facing speakers are loud enough and clear to not require headphones while watching movies. After spending a day or two watching video content or playing games, you will realise how annoying even a tiny notch can be on the display.

The only complaint I have on the 7T Pro, just like on the 7T, is battery life. I was able to get around seven hours of screen-on time and on the days that I played games for an hour or two, I couldn’t get through an entire day. However, with its Warp Charge 30T fast charging, you can fill up the battery to 50 percent in less than half an hour, and completely charge the device in an hour. When in a hurry, a 15-minute charge will restore up to 40 percent of the battery. Fast charging is crazy on the 7T series but you will have to carry that power brick with you. One of the highlights of the 7T Pro is the rear triple-camera setup that uses the popular Sony IMX586 48 MP primary sensor, in conjunction with a 16 MP ultra-wide-angle lens and 8 MP telephoto lens. The 7T introduced a triple camera setup on the rear as well, however, the sensor array was installed in a horizontal configuration. The triple camera system on the rear of the OnePlus 7T Pro. Image: tech2/Abhijit Dey.

I was curious to check how similar the cameras were on the 7 Pro, 7T, and the 7T Pro. And I wasn’t surprised to notice that they captured almost indistinguishable pictures. All the pictures were taken on the latest software update.

The 7 Pro had received the OxygenOS 10 update right before this review and there have been many improvements to the camera. The colours felt natural in shots taken on the primary camera sensor and it manages to get enough details, but only in well-lit conditions. In sunlight or bright indoor lighting, you wouldn’t have to worry much about focussing on the subject. However, when it gets dark, you will only be able to capture good photos by manually tapping on the area you want to focus on. In low-light conditions, images lose detail so the camera automatically starts sharpening everything. It tends to get aggressive with reflections when there’s hard light incident on the surface. Highlights are subtle and they don’t look overly blown out.

In OnePlus’ night mode, called Nightscape, the exposure is brought down to reveal details around light sources that tend to be blown out otherwise, but the sharpening becomes too aggressive when there are reflections. It’s still no match to what the Google Pixel 3a achieves with Night Sight though. 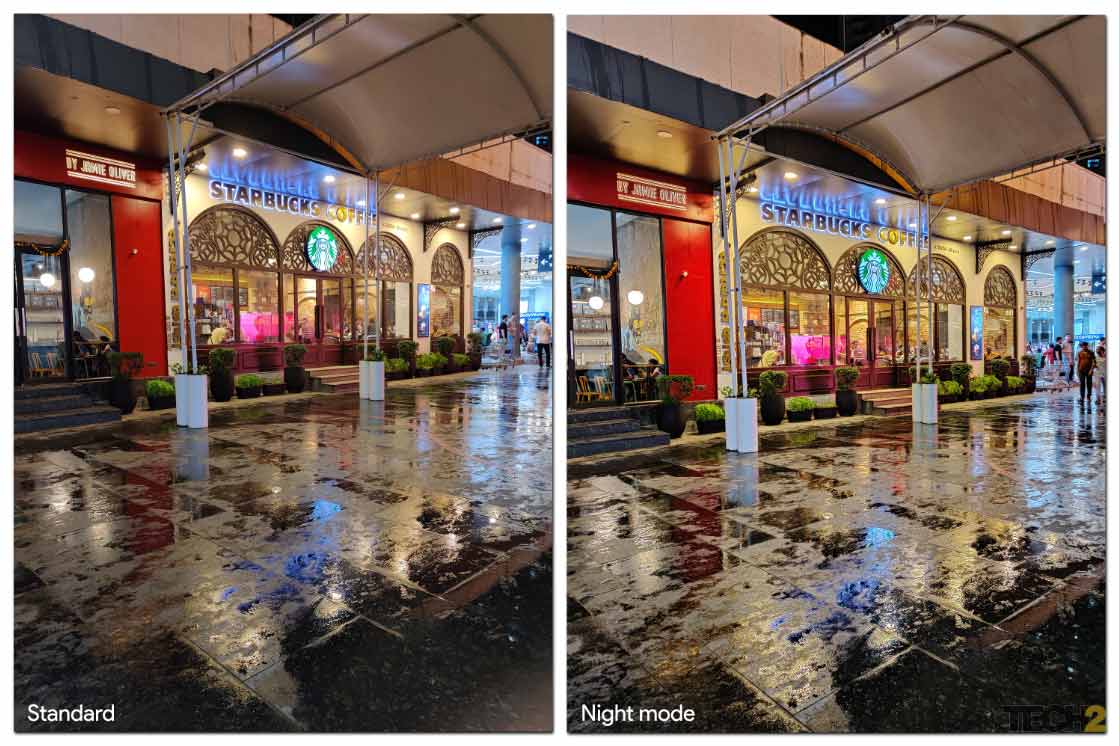 Three camera sensors enable a lot of flexibility when clicking pictures. Just like the previous phones, the white balance tends to become warmer when the ultra-wide-angle lens is used. In the other two capture modes, white balance tends more towards natural colours.

Shots that were taken with three different cameras in daylight. Image: tech2/Abhijit Dey.

Macro mode on the phone is fun to use. Your hands need to be steady when you’re taking a picture in this mode though. While macro mode allows you to get really close to an object to capture more details, you could alternatively also use the 3x optical zoom to get a close-up. Portrait mode isn’t extraordinary but the level of detail it captures is impressive. It’s difficult to say whether it has improved in edge detection because successive shots aren’t the same, but it definitely captures more detail. Both the OnePlus 7 Pro and 7T struggle with white balance indoors when switching to the portrait mode. This issue isn't present when shots are taken in sunlight. There isn't much of a difference between the OnePlus 7 Pro, 7T, and 7T Pro when it comes to front or rear camera performance. The level of detail is also the same. I observed that the 7T series is better equipped to handle a higher dynamic range, as can be seen in the images below, and it was a hit or miss on the 7 Pro. Because of this, the colours of the subject in focus would be slightly affected.

Video recording is actually good on the 7T Pro. You can record up to 4K 60 fps videos using the rear cameras and 1080p 30 fps using the front camera. It’s not as stable as the ones shot on the Asus ROG Phone II since it tends to capture the tiny jerks while walking. Recording videos from a moving car is extremely smooth and it has slightly improved with the latest update. The camera tends to sharpen textures, but it doesn’t go far overboard.

In summary, you aren’t getting the best camera in this price range. It’s bound to be compared to premium flagship phones such as the Pixel 3, Samsung Galaxy S10 series, etc. Since the camera performance is similar to the 7T, this camera is still average in its class. And average isn’t bad at all since the photos are good enough in all lighting conditions, and better in daylight. There are many camera modes on the OnePlus 7T Pro. Image: tech2/Abhijit Dey.

Verdict: Not much of a ‘Pro’ anymore

It's clear that the OnePlus 7T Pro isn't much of an upgrade from the 7 Pro. It's only a hardware refresh to carry the top-end mobile chipset. While there was a prominent distinction of features between the 7 and 7 Pro, the company has lowered that margin between the 7T and 7T Pro.

The OnePlus 7T is as capable as the 7T Pro on the performance and camera fronts. Priced at Rs 53,999, you're paying 16k extra (compared to the 8 GB + 128 GB variant of the 7T) for a notch-less and bigger display, a pop-up selfie shooter, some extra RAM, double the internal storage and slightly better battery capacity. If you want those features, this is money well spent, but honestly, the 7T is mostly the same phone, and far cheaper.

the bigger question is whether your money would be better spent on a more established flagship, given that the OnePlus 7T is basically the same phone in different packaging.

The OnePlus 7T Pro is powered by the Qualcomm Snapdragon 855+ with 8 GB of RAM and 256 GB of storage. It packs a 4,085 mAh battery that supports Warp Charge 30T fast charging. There's a triple camera setup on the rear with a 48 MP primary sensor along with a 16 MP ultra-wide-angle lens and an 8 MP telephoto lens. On the front, there's a 16 MP pop-up selfie camera.

After a 6K Price Drop, OnePlus 7T Pro Is Now More Attractive Than Ever

OnePlus 7T Pro could come with Snapdragon 855 Plus, Android 10 out-of-the-box