OnePlus 7 review: At Rs 32,999 this is a more sensible alternative to the OP7 Pro

Apart from being great value for money, the OnePlus 7 offers some Pixel-beating camera capabilities. If you understood any of the hardware features that I mentioned in the above paragraph, the OnePlus 7 Pro most certainly is for you! The OnePlus 7 features a smaller 6.41-inch display, dual-cameras, a slightly smaller battery with fast enough charging. It’s also smaller and lighter (182 grams) than the 7 Pro (206 grams), which makes it easier to hold and use.

So, if the basic camera performance is pretty much on par with the OnePlus 7 Pro, why would you want a 7 Pro? Or should you upgrade to a 7 from a 6 or a 6T? Read on to find out.

What’s new over the OnePlus 6T?

There’s a new Qualcomm Snapdragon 855 chipset inside with a faster Adreno 640 graphics, which means that your games will run a lot cooler, take up less power (from your battery) and may even see a slight performance bump over the OnePlus 6T.

There’s faster UFS 3.0 storage but you really won’t notice the difference unless you get a high from sniffing PC RAM modules. The faster storage will simply make transferring files and photos faster with a slight possible bump in game load times. And that’s about it!

A gigantic improvement over the past OnePlus smartphones is the dual speaker setup. It’s loud and really clear and I didn’t mind watching my favourite Netflix shows without headphones plugged in. These dual speakers are loud enough to fill a bedroom with music and are good enough to show off at a quick team conference call. In short, they are a big contrast to the tiny bass-less speakers on past OnePlus phones. A more powerful receiver speaker doubles up as a second speaker on the OnePlus 7 (in Red). Combined, they are too damn loud and do a fantastic job with the audio. Image: Tech2/Omkar P

Another major improvement is the Screen Unlock. I was using a OnePlus 6T McLaren edition over the past few days before I switched to the new OnePlus 7 and it’s easy to conclude that Screen Unlock is way faster and a lot more reliable than the previous generation. At times, it almost felt like the phone wasn’t even authenticating my digit and just unlocking the device (but that was not the case). 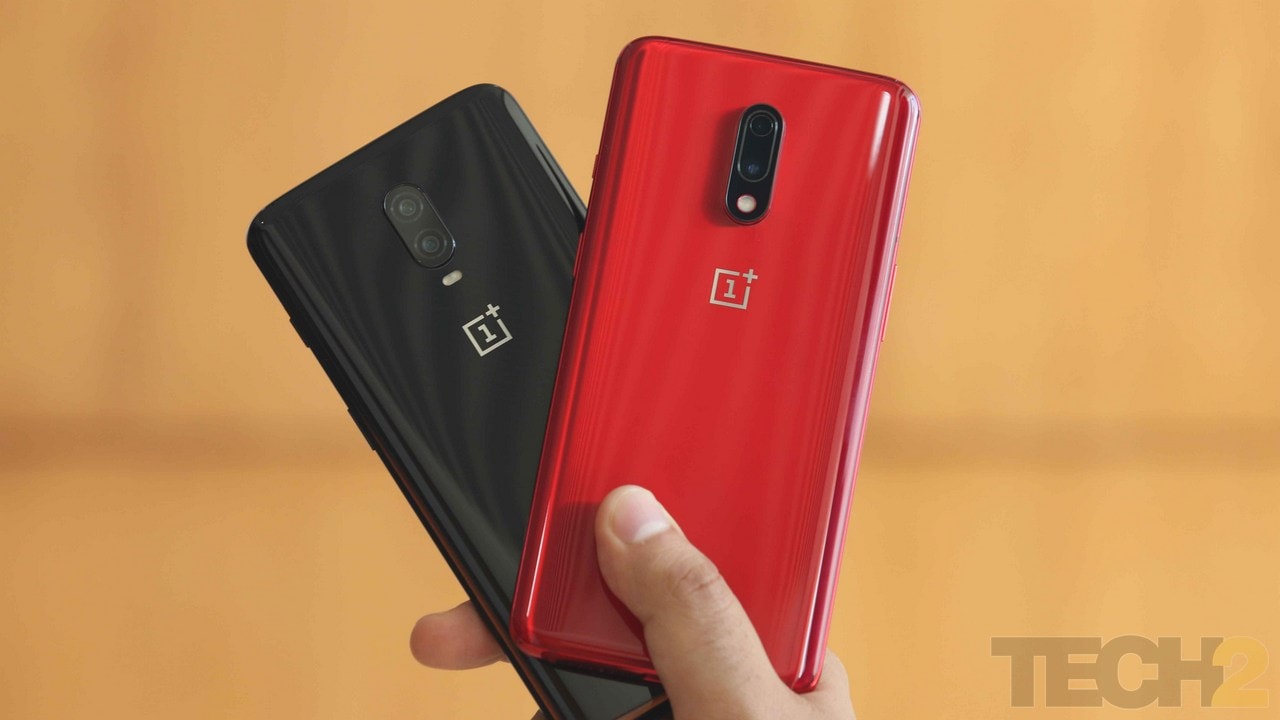 The biggest improvement is on the back where the OnePlus 7 gets a bigger 48 MP camera. Image: Tech2/Omkar P

The biggest improvement over the 6T is the new (and quite popular) 48 MP rear camera, but more about it a bit later.

The finer stuff that OnePlus owners will appreciate is the new (but linear) vibration motor which feels as good as the one on the OnePlus 7 Pro (even though they are different). It’s a drastic jump from buzzing and jarring motor from the 6T and previous OnePlus devices, that I would instantly turn off because they felt horrible while using the phone, especially with the virtual navigation keys.

There’s finally a better, brighter display that is a lot brighter than the one on the 6T. It’s not as fast as the 90 Hz unit on the 7 Pro, but you would only be missing it if you play a lot of games. It’s also a lot more colour accurate than the 6T’s display so the reds look “more red” and less orange, whether it’s an app, game videos or photos. 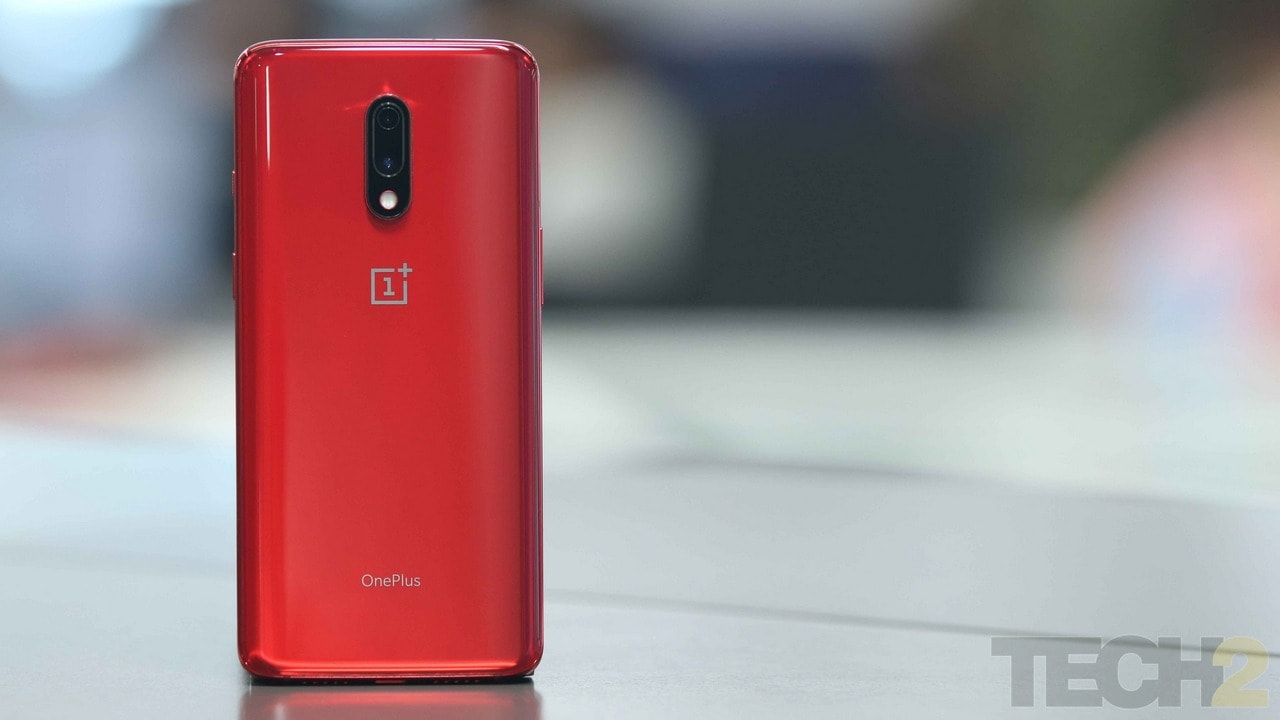 The glossy glass back looks good but has been cleaned with a lot of effort for this photo. Image: Tech2/Omkar P

What I really hate about the OnePlus 7 is that it skips on the matte finish options that were available with the 6T. You get a simpler (albeit elegant) Mirror Gray or Red finishes but they are both glossy which means they will catch fingerprints. However, what you get with that smudgy, glossy finish, is a bit more grip as compared to the slippery matte finish. Currently, the matte-finished option is only available with the pricier OnePlus 7 Pro and that too just in Nebula Blue. The OnePlus 6T (left) looks identical to the OnePlus 7 on the right. Image: Tech2/Omkar P

The design is almost indistinguishable from the OnePlus 6T to the untrained eye (or the casual shopper). There are minor differences like the placement of the SIM ejector cavity, the bigger receiver speaker grille at the top and of course that chunky camera protrusion at the back. Else, it’s pretty much the same as the OnePlus 6T. So if you are looking for a new design, you could look at the upcoming Asus Zenfone 6 (flip camera) or the Oppo Reno 10X Zoom edition (shark-fin raising camera + matte-finish design). Else you can spend another Rs 17,000 for the bezel-less OnePlus 7 Pro if you don’t want to switch brands.

OnePlus promises superior (read improved) imaging with the OnePlus 7. A quick comparison with the OnePlus 6T shows that image quality has improved drastically over the 6T. It is, however, no match for the Google Pixel 3a (starts from Rs 39,999) overall. Save for some areas. The Google Pixel 3a XL nails the Portrait shots with accurate colours and details. L to R: OnePlus 7, Pixel 3a XL Image: Tech2

The details and exposure has improved drastically over the OnePlus 6T, but are still on the lower side when compared to the crisper Pixel 3a. So whether you shoot a Portrait shot or a regular shot with no bokeh, you will get lesser details along with a softer focus on your subject as the beautification is always hard at work whether it’s on or switched off. 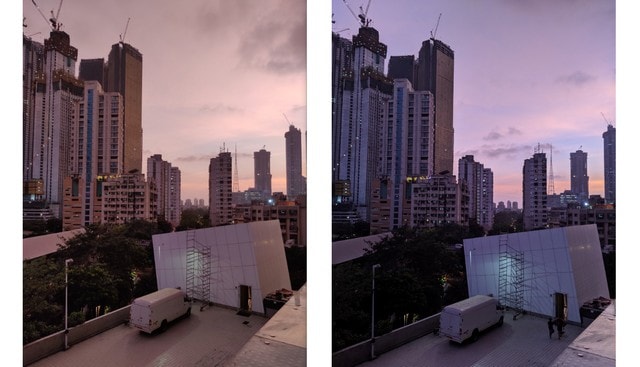 The OnePlus 7 shoots more detailed and colour accurate landscapes. The Pixel went completely off with the colours and looked nothing like the real scene. L to R: OnePlus 7, Pixel 3a XL Image: Tech2

When it came to landscapes the OnePlus 7 actually shot better exposed and more colour accurate photos than the Pixel 3a even though the colour tones were not as accurate when it came to portraits. What I liked with the OnePlus Portrait shots was that the applied blur effect was not as aggressive and unrealistic as the Pixel’s blur effect. 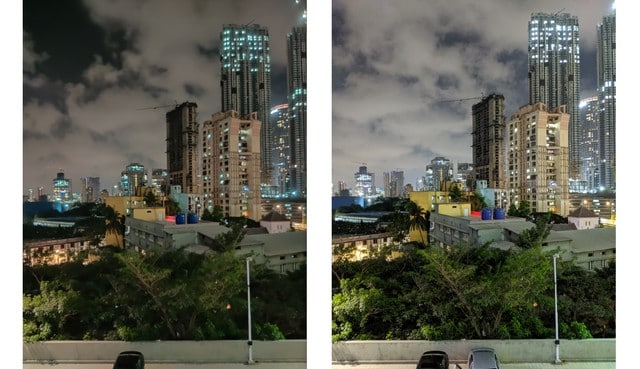 In low light, things are kind of a mixed bag. As long as there’s some street lighting around (100 lux), you get some decent low light shots. Switch to Nightscape and the results are quite impressive given this smartphone’s pricing and are almost Pixel-like as you can see from the resized samples below. Nightscape photos do look a lot better than the standard auto mode ones. Image: Tech2 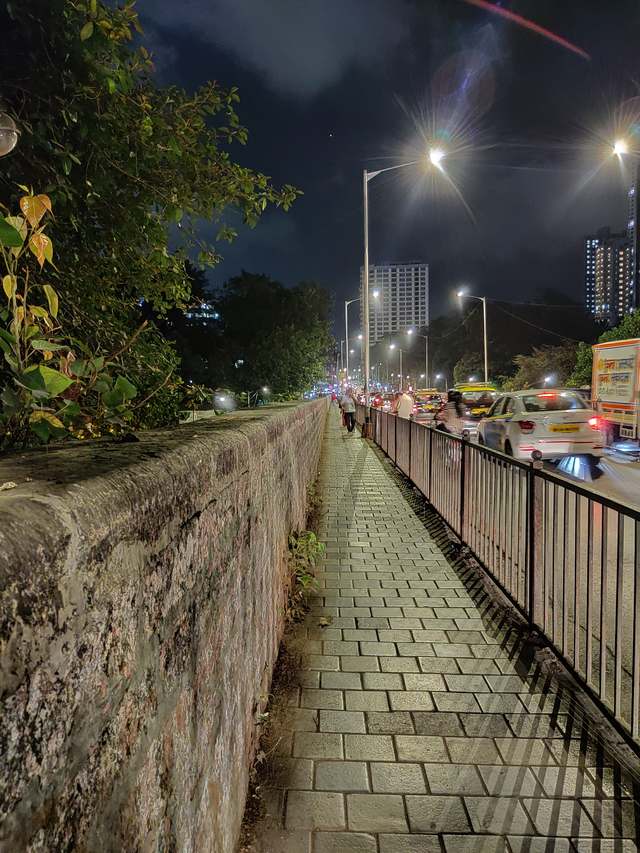 Noise in on the lower side provided there is one source of light. Image: Tech2 The Nightscape shots lack depth as compared to those from the Pixel 3a XL. But at Rs 32,999 these are pretty good. Image: Tech2

When it comes to video there are improvements over the 6T, but it’s not as stabilised and more importantly colour accurate (teal green instead of blue?) as the Pixel 3a. Selfie videos, however, are more stabilised and sharper on the OnePlus 7. So yes, that 48 MP camera on the OnePlus 7 is worth it. But it does not offer the flexibility of lenses that you get with the 7 Pro.

What about the battery?

That slightly smaller 3,700 mAh battery (in comparison to the 7 Pro), in theory, should last longer considering that it’s connected to a lower (read sensible) FHD display, instead of a power-hungry 90 Hz QHD+ unit on the 7 Pro. There’s no faster Warp charge like on the OnePlus 7 Pro (which is also not as fast as the Huawei P30 Pro) but it keeps up with the old OnePlus promise of a day’s worth of power with just a half an hour (30 minutes) of charging. The phone easily lasted me through a standard workday just in case you were wondering.

Who should buy the OnePlus 7? Image: Tech2/Omkar P

Buy the OnePlus 7 if you want a lighter and a smaller smartphone over the 7 Pro.

If you are not sure whether to go for either OnePlus 7 or OnePlus 7 pro, do wait for our upcoming Asus Zenfone 6 and Oppo Reno (Rs 39,999) reviews to be out to see how all these phones compare.

Go for the Pixel 3a (Rs 39,999) if the camera or software updates are the only details that matter to you. The Pixel 3a may be a better camera, but it's not exactly future-proof with 4 GB of RAM.

Stick to your OnePlus 6T if gaming performance is all that matters to you.

And get a OnePlus 7 Pro only if you have the money to spare as you won’t really be missing the wide-angle and zoom cameras and that 90 Hz display, unless you have used one. To top it off they are not all that great at Rs 48,999 either.