At Rs 1,86,000, I’d heartily recommend this laptop to anyone looking for a sensible desktop replacement that can offer a no-holds-barred gaming experience. Gaming PCs are fast becoming dinosaurs. With most workflows shifting to mobile, maintaining a desktop computer isn’t as easy as it once was. Toss in this new cryptomining menace that’s essentially killed off the gaming market, and we’re left with a situation where it’s increasingly difficult to build one even if we wanted to.

That said, gaming PCs still have a distinct advantage over laptops. They’re fast and powerful for one thing, they’re also, usually, powering large displays that are a pleasure to game on. Finding an equivalent experience on a laptop is nigh impossible. 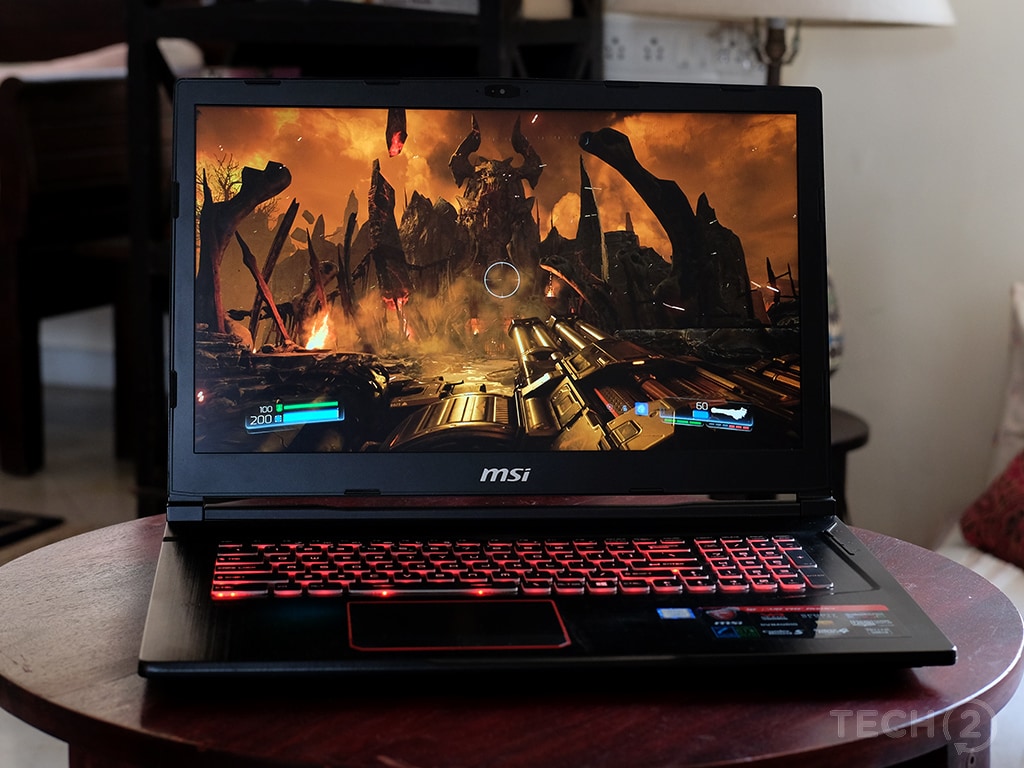 The Raider is large, but that also makes it a great desktop replacement

Or is it? The unimaginatively named MSI GE73VR 7RF Raider has made the most convincing argument yet that a laptop can be an excellent desktop replacement.

The MSI GE73VR 7RF Raider (henceforth referred to as Raider), is a large laptop. It’s packing in some mean hardware and the bulk comes from accommodating the thermal needs of that hardware and that 17-inch display. It's a bulky laptop, but that bulk also means great cooling

Last year’s GT73VR 7RF was a true monster, and I’m happy to say that the Raider isn’t nearly as large. It’s a bulky device, but this is also a laptop that you can pack into a large backpack.

As with most laptops today, the device is mostly made of plastic and aluminium. There’s nothing unusual to write about.

The layout of the ports is very standard, but I did appreciate the fact that the USB ports were backlit. As with most gamers, I tend to game a lot at night, and the backlit ports were very useful. I would have also loved it if the headphone jacks were also backlit, but I guess we can’t have everything.

The keyboard and trackpad are just as good as they’ve ever been on the gaming laptops I’ve tested. They’re a tad mushy but respond immediately when you type or game, with no notable wobble. MSI's RGB game is strong on this front

The trackpad features are outlined in RGB and the keyboard is backlit with RGB LEDs. The only complaint I do have here, and it’s a very small one, is that the RGB backlighting doesn’t seem as uniform as I’ve seen on laptops such as those from ASUS. Not that it matters much when gaming.

If nothing else, the backlight is really bright.

Since the Raider packs in some of the most powerful gaming hardware in the laptop world, it’s no slouch when it comes to playing games at the highest settings. You get an Intel Core i7-7700HQ CPU, 16 GB of RAM, a 128 GB SSD paired with a 1 TB HDD and an NVIDIA GeForce GTX 1070 GPU. This is paired with an amazing 17-inch, G-Sync ready, 120 Hz display. I’ll dive into the details of the display in a bit. For now, just note that it is awesome. 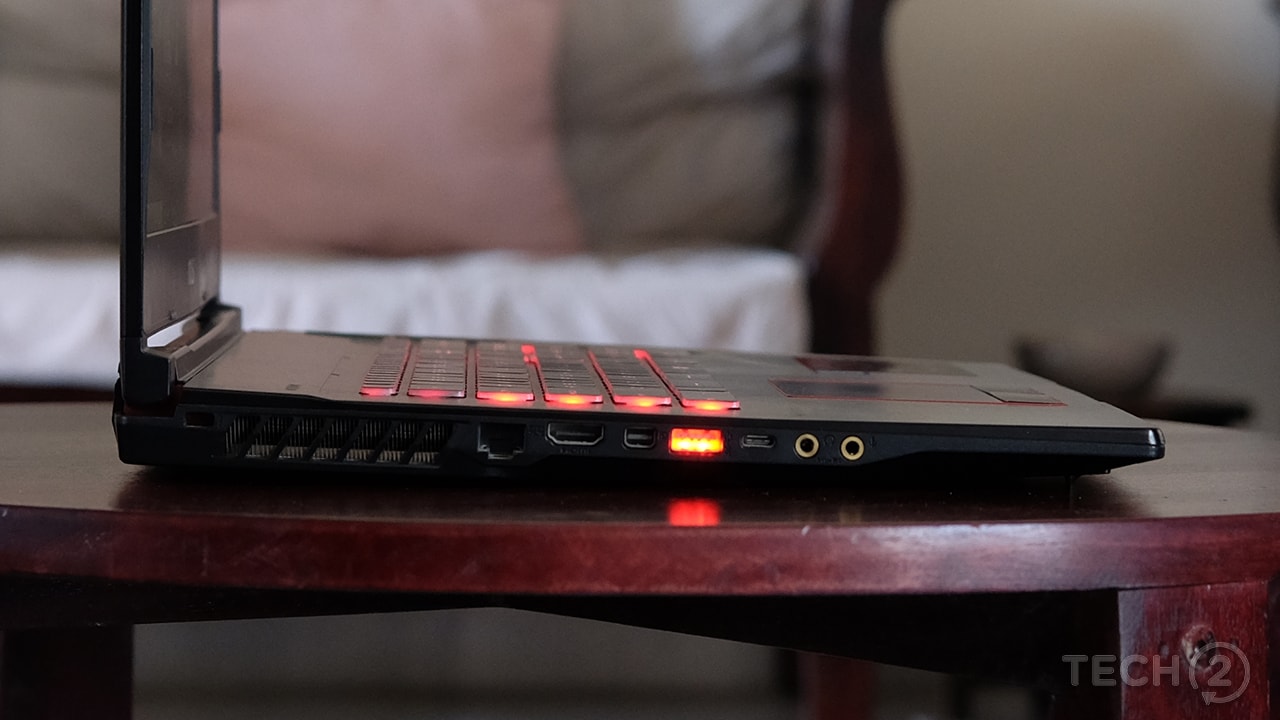 The backlit USB ports are a nice touch

Note the presence of the GTX 1070. It’s a choice I really like on this laptop because it’s not as overpowered and expensive as the GTX 1080 and is perfect for the 120 Hz FHD display here.

And that display, it’s perfect. I know that there are many here who’d want a 4K display, but, for a gamer,  higher refresh rates are far more important than higher resolution. At 17 inches, 1080p is more than enough.

My favourite part of the Raider is the display. I’d like to point out upfront that this isn’t the best display on a laptop. MSI tends to use displays that aren’t colour accurate, and as confirmed by our Spyder 3 calibration tool, a little too green. The bundled MSI screen tuning utility is also as unnecessary as it is pointless. Why would anyone not want to use anything but the most colour-accurate option available, to begin with?

That said, I’d also like to point out that unless you’re a graphic designer or spent years staring at calibrated displays, you won’t really care that the colours aren’t perfect. FHD might seem a bit low, but it's the perfect resolution for gaming on the go.

So why do I like the display so much? Simply put, it’s big and it’s fast.

The display is good enough for movies and spectacular for gaming, and that’s all that matters.

I hate gaming on laptops because I always end up with the feeling that I’m squinting at the screen. Especially for gaming, small displays aren’t ideal. They don’t draw you in as well as a large display does.

At the distance at which you’d normally use a laptop, the 17-inch screen fills your vision. Paired with that lovely 120 Hz refresh rate and the power of the 1070, gaming is just amazing. While the display is theoretically capable of rendering accurate colours, the default colour profiles spoil the effect

Refresh rate matters a great deal for gamers because it determines the extent of, or lack of, ghosting on a screen. A movie is rendered at 24 Hz, which gives it that dream-like quality. Most normal displays comfortably manage to hit the 60 Hz mark, which is also not bad. At 120 Hz, however, games seem buttery smooth. Suddenly, everything around you is that much sharper and smoother.

If you’ve never experienced 120 Hz gaming before, you’re missing out. Once you try it, it’s hard to go back.

While I do love this display, I only like it because of its form factor. If the likes of MSI, HP, ASUS or any number of other device makers come out with a better 17-inch gaming display, I’d happily jump for that one.

The hardware powering this laptop is some of the most powerful around. The GTX 1070 is the second-fastest graphics card you can pack into a laptop, and given the Raider’s performance, I see no reason for packing in the more powerful GTX 1080. A 1070 is also cheaper.

We’d tested a laptop with the GTX 1080 on MSI’s GT73 Titan, but it was overkill for that laptop. The hardware configuration also pushed the price of the Titan above the Rs 3 lakh range. The Raider, on the other hand, offers 90 percent of the performance for half the price, and that’s a stellar deal no matter how you look at it.

You can see the benchmark figures in the embedded table and clearly, this laptop is very capable.

More importantly, the laptop never throttled its performance and frame-rates were rock solid throughout. Things did get very loud under load, but you must accept that from any gaming laptop.

I was very slightly disappointed by SSD performance. Given that MSI claims to be using a high-speed SSD, the observed speeds of 540 Mbps read and 468 Mbps writes are six times slower than the competition, but several orders of magnitude faster than a regular hard disk. Disk read and write speeds on the HDDs were around 115 Mbps and 111 Mbps respectively, which indicates that the spinning disks are on the faster side.

Speaker quality was the only disappointing feature of the laptop. For some reason, the output simply wasn’t loud enough to be comfortable. My 13-inch MacBook Pro from 2014 is way louder.

If you’re in a quiet room, the audio is good enough. Even a mildly noisy environment, however, will have you reaching for your headphones.

Thanks to the loud but effective fans, cooling wasn’t an issue. Under load, temperatures did hit the 90 degrees Celsius mark, but it was never hot enough to get the CPU or GPU to dial back the performance.

The battery life on the laptop was surprisingly good. We noted a time of over 2.5 hours in our standard PCMark 8 battery test, a feat that has never been achieved before by a gaming laptop in our labs.

While gaming and with NVIDIA BatteryBoost on, we managed to eke out a little over 40 minutes of play time.

The MSI Raider is already my favourite gaming laptop so far, but only because I’m looking at it as a desktop replacement. If I were ever to give up my PC, I think this would be the laptop I'd opt for.

The MSI Raider isn’t an over-the-top gaming laptop, it’s a very high-end one that ticks all the right boxes. It’s not the very best laptop and neither is it the largest, but it’s definitely the most optimum gaming device I’ve seen so far.

At Rs 1,86,000, I’d heartily recommend this laptop to anyone looking for a sensible desktop replacement that can offer a no-holds-barred gaming experience.