The Motorola G8 Power Lite scores well on paper, but it doesn't really stand out in the crowd.

Motorola G8 Power Lite is the right choice for you if the battery is your first priority and you fancy good looks while buying a smartphone.

If the name already didn’t give away, the highlight of the phone is its ‘power’ – a 5,000 mAh battery.

Motorola launched the Motorola G8 Power Lite under the 10K price segment, and on paper, it easily trumps its competitors in specs.

If only it were that simple. There are some pain points that might make you think twice.

The question is: does the price justify the compromises it demands?

After using the phone for a fair amount of time, I think I can break it down for you.

The G8 Power Lite comes in two colour options: Royal Blue and Arctic Blue. The one that I have is Arctic Blue, and to be honest, it didn’t make my jaw drop. I mean, I like blue, the matte finish is an added bonus, but the bright blue colour gradient makes the Arctic Blue variant look a bit tacky to me. I would pick the Royal Blue colour variant if I had to. But again, this is my personal preference.

The back of the phone is made from plastic, which one would expect to look cheap, but thanks to the matte finish, Motorola did a wonderful job to make phone look more appealing. It is not a fingerprint magnet, and won't feel slippery when you hold it. You can still use the included silicone case, if you’re cautious.

The display sports a waterdrop notch with a top and bottom bezel that look almost the same width. Another thing that I liked about the design is that Motorola has given a textured power button on the left edge, instead of the regular one. This makes it easier for the user to identify it without actually looking it at. Not a big deal, but a thoughtful design choice. 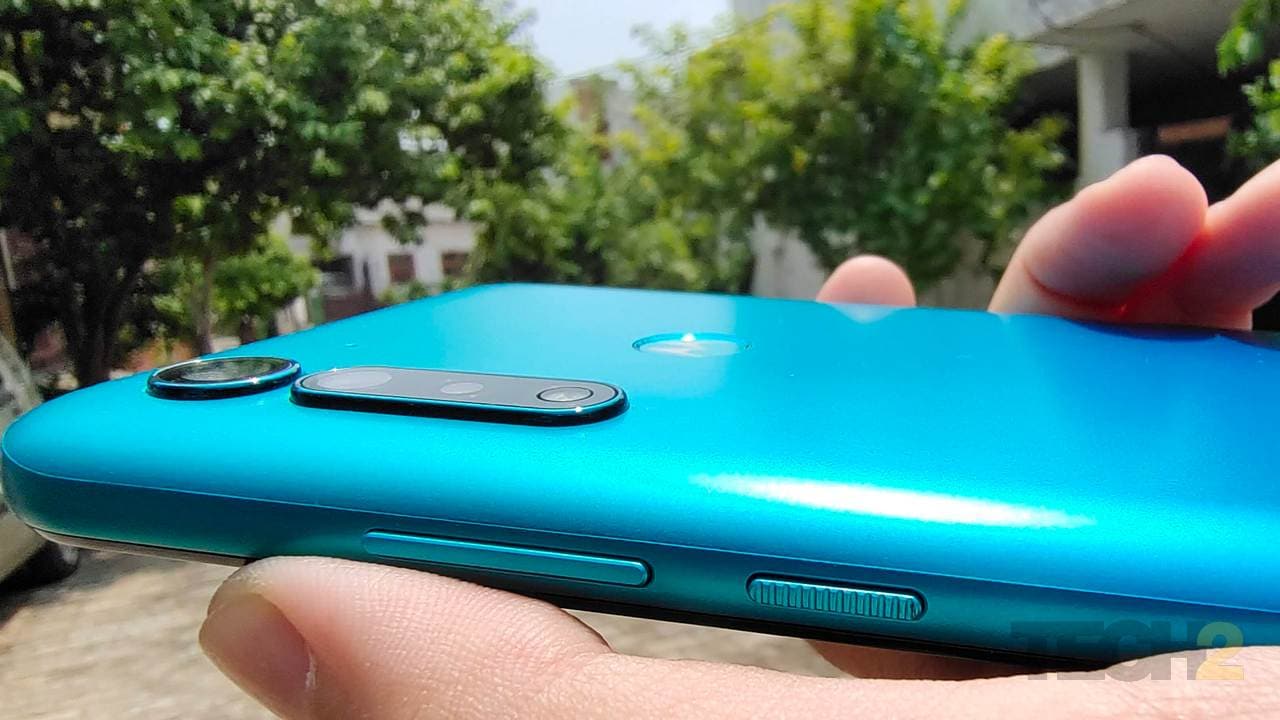 Flipping the device over, you see a triple rear camera setup tucked neatly in a vertical camera module, and a fingerprint sensor in the top-mid section that comes with the Motorola logo on it. (Classic Motorola!)

Interestingly, the speaker grill is at the back of the phone instead of the edge, which looked good to me at first, thinking that it would help gamers with a good audio experience. Holding phones in a landscape orientation for games such as PUBG usually blocks speakers at the bottom. However, I saw no advantage here. The sound was directed away from the user! Not so thoughtful. The smartphone features a micro-USB port and a headphone jack.

In terms of weight, the smartphone weighs 200g, so not that heavy; a plastic body helps. The Motorola G8 Power Lite is a tall phone, at least for my hands. I found it difficult to reach the notification bar with one hand, and that can be annoying. It has a 20:9 aspect ratio. If that doesn’t concern you or you have large hands, you’re good to go.

Display: Couldn’t ask for more at this price tag

The smartphone sports a 6.5-inch LCD display that has a resolution of 1,600 x 720 pixels. It has a waterdrop notch at the top that houses the front camera, but the notch doesn’t intrude, so you will enjoy watching movies and shows on the phone. In terms of brightness, the outdoor visibility is decent, and I didn’t have to squint while using it.

The display is good, but it doesn’t really pop like some other phones. Temper your expectations, because again: 9,499 bucks. It still makes a compelling case for itself, since competitors like Redmi and Realme also don’t offer anything unique at this price point.

I appreciate the fact that Motorola is not chasing megapixels just to make its cameras seem tempting. The Motorola G8 Power Lite features a triple-camera setup that houses a 16 MP primary sensor, with a 2 MP macro and 2 MP depth sensor. On the front, you get an 8 MP selfie camera. Motorola G8 Power Lite features a triple rear camera setup at the back.

When it comes to the selfie camera, the smartphone managed to click some decent images with proper detail and accurate colour. I have my doubts when it comes to the portrait mode, however. The edge detection was not exactly accurate, but passable. Your Instagram game is sorted.

The main camera proved to be a remarkable performer when I clicked pictures in daylight. Whether it is the details or colour accuracy, both are laudable. So yes, you can completely rely on this one to capture amazing nature shots or fun day-out pictures.

In bokeh mode, I was impressed by how quickly it adjusts its focus, and even with the subject separation, the company has done a good job. However, I feel that the macro lens here is nothing but a gimmick. You can capture good quality close-up shots by the main camera itself, so why use a separate lens that is not adding any value? Low light camera performance is, in a word, terrible.

I found out that in challenging dim light, the flash is automatically turned on and weirdly, doesn’t turn off even when you turn it off deliberately! Very inconvenient. I mean, down tiger! I can decide when I want to use the flash.

Unfortunately, that is not the worst of it.

I noticed a purplish tint in images that were clicked in dim settings and on the top of that, the images had poor detail and appeared hazy and noisy. So no, it certainly won’t work in low lit bars. Remember those?

The camera is a significant compromise.

Solid battery, but outdated OS and chipset makes it a mixed bag

The beefy 5,000 mAh battery is one of the headline features of the phone. It lasted more than a day, and this is when I spent a good amount of time scrolling through Instagram, Facebook, playing Road Rash, clicking pictures, playing music and other day-to-day tasks.

The lack of fast charging is a glaring omission. It took over two hours to fill up the dead battery. You will have to take comfort in the fact that you don’t really have to charge it frequently, so the 10W charger that comes in the box is adequate.

One particularly noteworthy thing is that the phone still runs on Android 9 Pie! Smartphones have already started getting Android 11 update, so this is confounding. Still, the interface is clean, has an app drawer and will not frustrate you with bloatware. You also have a choice to enable system-wide dark mode if you want to.

The smartphone is powered by the MediaTek Helio P35 chipset and offers 4 GB RAM and 64 GB of internal storage, that is expandable up to 256 GB via micro-SD card. It handles everyday tasks well, but I noticed lag when it came to loading apps or switching between them. Not a deal-breaker at this price. Heavy gamers will be left wanting, because this phone will be easily overwhelmed. By that, I mean heat and noticeable lag.

So, if you’re a frequent gamer, you might want to skip this device.

Overall, the Motorola G8 Power Lite is a good-looking phone that will attract a lot of buyers. It offers excellent battery life, a clean UI, beautiful display, stunning daylight pictures, but the low light images are far from perfect. When it comes to gaming in this price segment, the smartphone is still behind the curve. TL;DR, this segment is all about priorities, and if battery life is yours, I recommend you to go for the Motorola G8 Power Lite. The Realme Narzo 10A that is priced at Rs 9,999 (4 GB RAM + 64 GB storage variant) is a viable alternative to the Motorola G8 Power Lite, but only if you are ready to spend an additional Rs 500 just for a better MediaTek Helio G70 chipset. The rest of the specs are the same, except for the camera details. The Redmi Note 8 (priced at Rs 12,499) is also a good option that comes with a 48 MP quad camera, 4 GB RAM, 4,000 mAh battery with 18W fast charging and a Snapdragon 665 chipset.

The Motorola G8 Power Lite might not be the best in the category, but it will certainly give competitors a run for their money.

For those looking to buy a device made outside the PRC, I recommend splurging and buying the Samsung Galaxy M21 that offers an AMOLED display, 6,000 mAh battery, 15W fast charging, a triple rear camera setup and an Exynos 9 Octa 9611 chipset at Rs 14,499.