Established gaming brands already sell capable gaming laptops. What is Lenovo offering that can set it apart? That’s exactly what I intend to find out. Lenovo has made, and maintained, quite a reputation for itself in the business laptop segment. The company has made gaming laptops before, but I don’t think they managed to establish much of a reputation for the company in the gaming space. 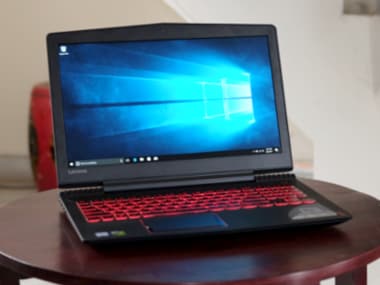 Established gaming brands like Asus’ ROG, Dell’s Alienware and MSI already sell capable gaming laptops, and very good ones at that. What is Lenovo offering that can set it apart from the rest?

With the Legion Y520, that’s exactly what I intend to find out.

The Y520 is mostly made of plastic. I assume there’s a metal frame underneath it all, because the device does feel sturdy. The lid features a textured finish that’s reminiscent of carbon-fibre. A Lenovo logo sits near one of the corners.

There are no garish logos or bright hues on the body, which I appreciate, but there’s also nothing striking about the design of the device. Personally, I don’t really care since I’d rather be gaming with the device than considering aesthetics, but to each his own. 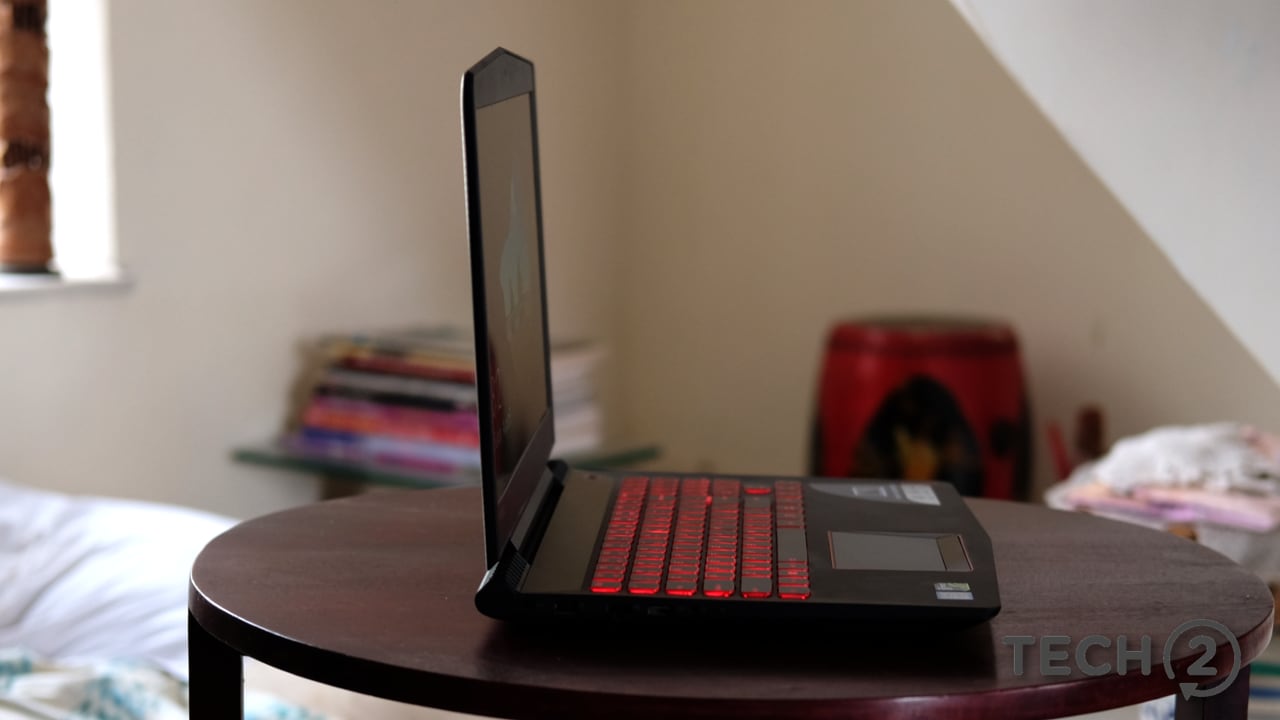 The design of the hinge is a bit unusual, visually, when compared to other laptops and there’s a gap between both edges and the laptop body. The speakers reside beside the hinge mechanism.

The air flows in from the bottom and is ejected out the back.

The keyboard uses Lenovo’s now standard “island keys” that are backlit. The trackpad has a glass surface and two dedicated buttons. There's also a backlit border. You only get the option of red backlighting, which, again, I don’t mind, but the competition does offer RGB lighting.

The keys feel nice to use and are precise in their response. They’re not mechanical switches of course, but they’re quite good for what they are. The all-important WASD keys are outlined in red for additional emphasis. The keyboard is backlit in red. Note the unusual layout of the numpad

I was happy to find a numpad on the keyboard, but its placement is odd and will take some getting used to. The lack of a numpad Enter key was especially confusing to me at first.

The typing experience was good and I experienced no missed strokes in the 10 days or so that I spent with the device. I did notice that the backspace key started squeaking a little bit after a few days of use, however.

Other than that, the keyboard and trackpad were comfortable to use, but that’s nothing out of the ordinary.

The left side of the unit features the Lenovo charging port, a full-size Ethernet port, a USB 2.0 port and a headphone jack. 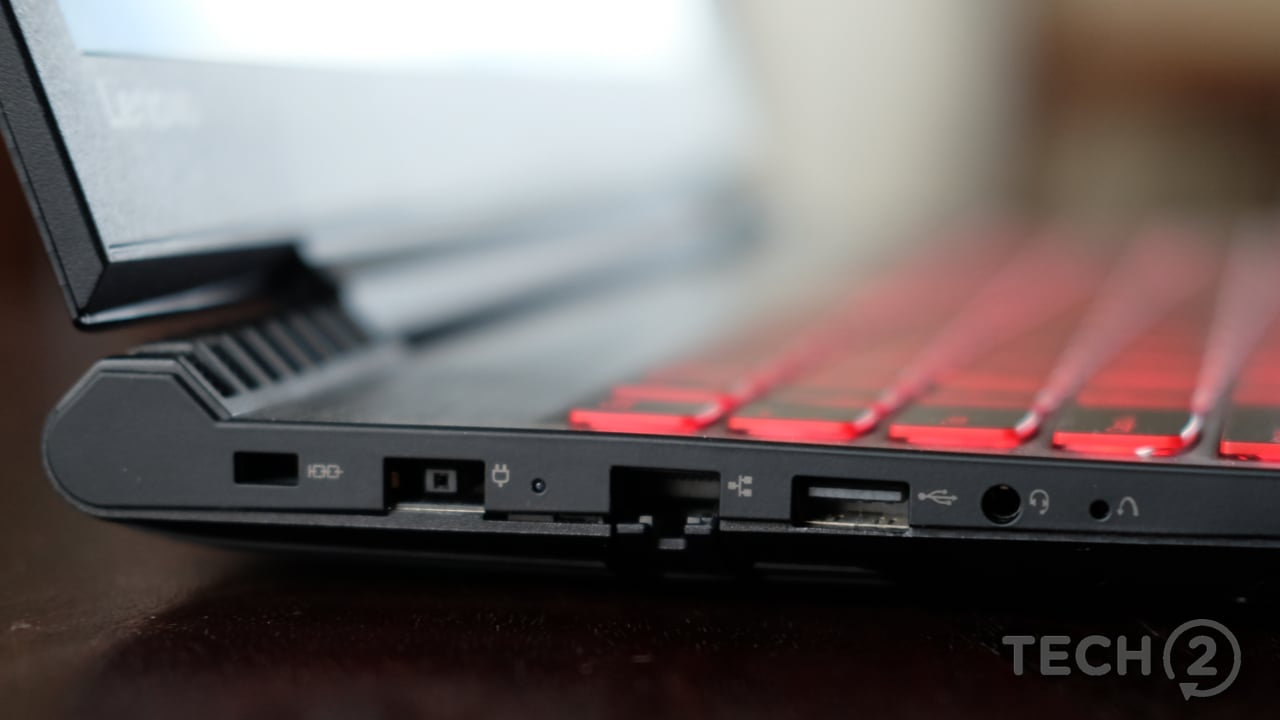 Lenovo is offering a sensible combination of features here. Nothing of importance has been left out and a Thunderbolt-ready USB-C port means that any adapter you need will have the bandwidth required to function. The display is sharp and bright. Colours are also quite accurate.

The contrast ratio and black levels were among the best I’ve seen. The white level test did show some shades of white blurring together, but it’s still a very good showing for a laptop. This is no P3 display, but it’s a very good display nonetheless and more than good enough for gaming and light image editing.

I am happy to report that there was no noticeable backlight bleed either.

The screen was bright and I enjoyed working and gaming on it. FHD is a good resolution for a gaming laptop and given’ Windows’ scaling issues at higher resolutions, 4K would only serve to hamper the experience.

An Intel 7700HQ with a 1050Ti is bog standard configuration for a gaming laptop today. Performance is going to be very close and the only real differentiating factor is going to be thermal performance.

Personally, I would have preferred to see a Core i5 with an Nvidia 1060 because CPU performance doesn’t play as big a role in gaming performance as the GPU does. Anyway, as you can see from the graphs, I’m pitting the Lenovo Legion Y520 against the MSI GE62 7RE Apache Pro and the ASUS GL553VE. All three devices have the same CPU, RAM and GPU configuration and the gaming tests have been conducted at the same resolution.

Bear in mind that the ASUS GL553VE was tested many months ago and that various driver and game updates will result in seemingly lower performance. I’ve ignored benchmarks where the performance discrepancy is too high.

It’s clear from the graphs that gaming performance is interchangeable between the MSI unit and the Lenovo. The Lenovo has a slight edge, but the MSI is within a percentage point or two, so it’s not significant. The ASUS unit actually lags behind both units in many tests.

The CPU benchmarks paint a different picture, however. While the Y520 does well in shorter benchmarks, it struggles massively in a longer benchmark like Cinebench. There’s clearly some severe throttling happening.

Investigating further, I noticed that under high loads, the CPU clock never crossed 2.7 GHz and usually hovered at the 2.6 GHz mark. Bear in mind that the 7700HQ’s base clock is 2.8 GHz with a boost of up to 3.8 GHz. The CPU never once touched 3.8 GHz, even under single-core loading.

If you’re only going to game, ignore the CPU score. The 1050Ti is a bottleneck for the CPU, so in graphically-intensive tasks, throttling isn’t an issue. If you’re using the laptop for CPU-intensive tasks like rendering, video editing, etc., this throttling can be an issue.

Overall, I’d say that I’m actually happy with the gaming performance of the unit. The CPU is throttled, but that doesn’t affect games and the CPU temperature rarely crossed 80 degrees.

Our standard battery test pegged the laptop’s battery life at two hours. In real world usage as well, doing just regular office work (email, Word, Chrome) we managed the same time on average. This battery life is low, but it’s actually fractionally better than the competition, which usually dies at the one hour fifty minutes mark. In gaming with Nvidia BatteryBoost enable, we managed about 40-45 minutes of continuous gaming, which is average in this class of product.

As we’ve always say about gaming laptops, expecting more than this from a high-performance machine is asking for the impossible, until something new comes around the corner anyway.

Of the gaming laptops I’ve tested this year, I think the Legion Y520 is my favourite. It’s a boring design and thermal throttling is a minor issue. However, it’s built just as well as the competition, performs fractionally better in gaming tasks and has a great display.

That's all well and good, but what really sets the device apart is the price. Despite being listed on Lenovo's site at a little over Rs 1,05,000, Lenovo tells us that the official MRP of the device is Rs 92,490.

At Rs 92,490 price, the Y520 is the cheapest device in India with this configuration. We could find no other device in the Indian market that offered the same combination of specifications and performance and for that reason alone, the Lenovo Legion Y520 earns my seal of approval.