Lenovo Ideapad 520S review: A good buy at its price, but it could do with some tweaks

The Ideapad 520S is tastefully designed and nicely built. The unit we received came in a matte grey finish and features a small Lenovo logo on the lid. Unlike an entry-level computer, which is a compromise based on price, a mid-range device, I feel, is a workhorse. It’s not meant to be flashy like a Dell XPS 13 or an Apple MacBook, it’s a device meant for someone who needs a PC to work on regularly.

When I say workhorse, I mean a device that will be used regularly, be it for work or entertainment, whether you’re a working professional or a student. I expect such a laptop to be adequately powered and provide a pleasant computing experience. They need not be flashy or boast of the fanciest of features.

The Lenovo Ideapad 520S is one such device, and it could be the best example of its kind so far. 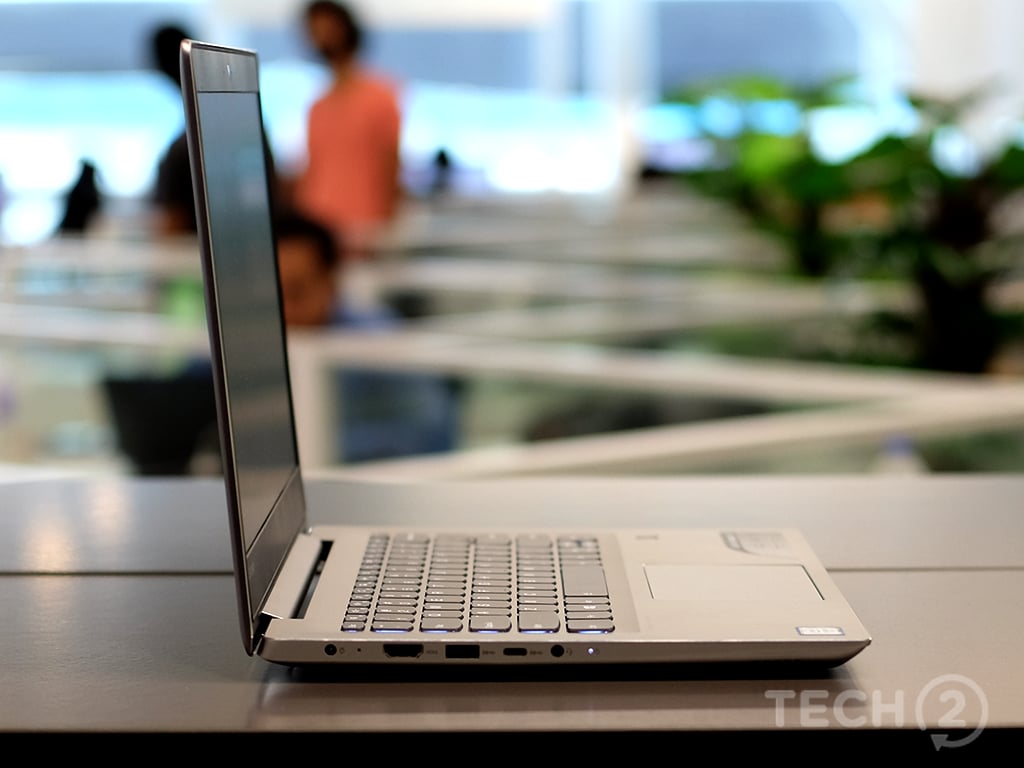 The laptop is slim and not very heavy

The Ideapad 520S is tastefully designed and nicely built. The unit we received came in a matte grey finish and features a small, shiny, Lenovo logo placed on the lid. On opening up the device, you see the 14-inch display nestled in a black frame with bezels that aren’t too thick.

This isn’t the most solid of devices, but it is solid enough. The palm rest region, for example, can flex if you apply a bit of pressure, but it doesn’t feel flimsy.

One area I do have a complaint with is the hinge. It swivels back by 180 degrees, which is nice, but it’s also not very strong. A gentle tap can set the screen wobbling for as long as four seconds and if you’re a heavy typist, you’ll find the screen wobbling ever so slightly as you type, especially if the laptop isn’t perfectly stable on a given platform.

Note: Another issue, which Lenovo assures me is a very rare occurrence, was that our review unit (a sealed unit) arrived with a popped top bezel. Popping it back was as simple a process as pressing it in, but that wasn’t something we expected to happen on a laptop.

That said, the bezel hasn’t popped out again and it could just be that we were unlucky with our shipment. It’s testament to Lenovo’s service that a service engineer popped over the very next day that a complaint was placed and sorted out the issue. He also inspected the laptop for further damage before signing off on the device. 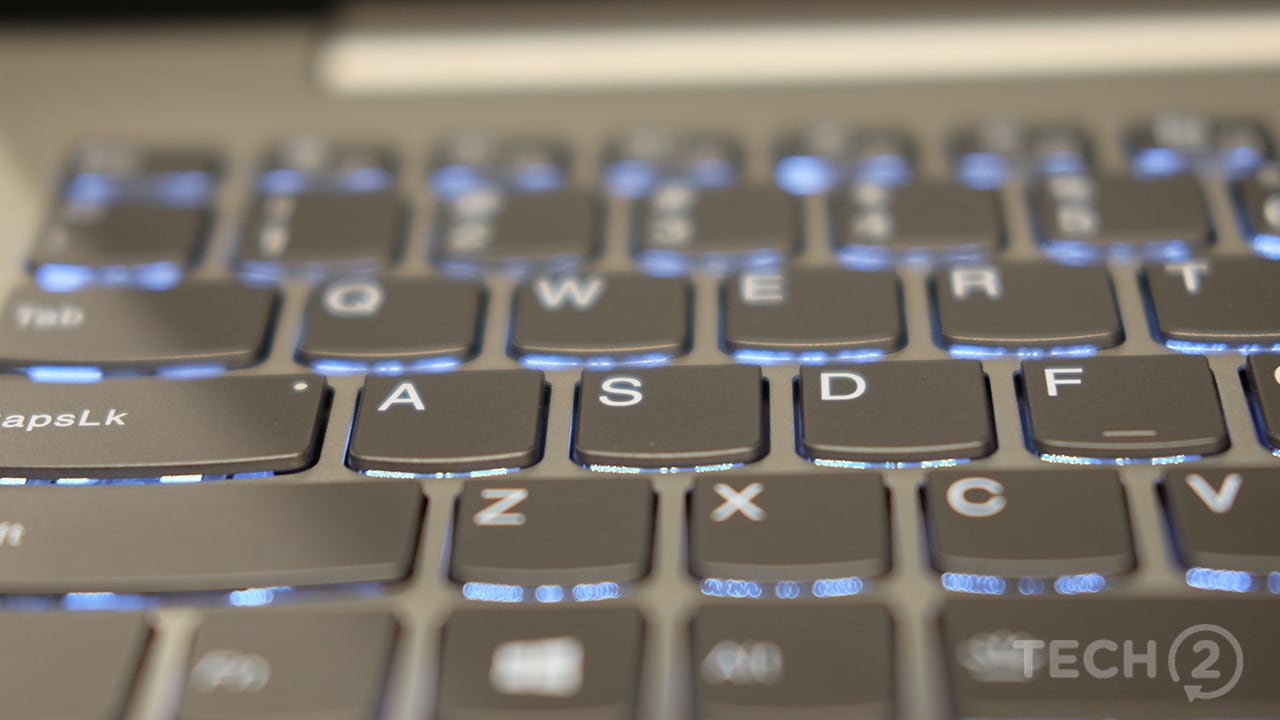 The keys do feel mushy, but the travel is low and the response is quick.

I like the keyboard and trackpad on the 520S. The keys are a bit mushy, there’s little to no tactile feedback, but that doesn’t mean that they’re bad. The key travel is low, but it’s not as low as on the MacBook. Keys responded uniformly to typing and I never missed a keystroke when using the device. The keys are also backlit. There is some key wobble, but it’s very slight.

I personally prefer keyboards with more feedback, but given how reliable keystrokes were on the 520S, I’m not complaining.

The trackpad is made of metal and is the same shade with the same matte finish as the palm rest of the laptop. It’s separated from the body by a bevelled, chromed edge.

The trackpad responds smoothly to mouse movement as well as gestures and is rather good.

The left and right click zones are distinct, but the two-finger-tap gesture is supported. The system configuration is quite nice at this price, though we would have preferred an SSD.

The variant we received for testing features a 7th gen Intel Core i5 7200U CPU, 8 GB of DDR4 2,133 MHz RAM and a 1 TB 5,400 RPM HDD. This is all very standard and there’s nothing exceptional. I’d have preferred a variant with an SSD, especially at the price the laptop is going for. You get a healthy selection of ports

The star feature of this laptop is the hinge, which can go back by up to 180 degrees, so the laptop can lie flat if necessary.

In terms of connectivity, you get 2x2 Wi-Fi AC and Bluetooth 4.1 support. 2x 2 W speakers provide the audio. The HD resolution isn't ideal, but it's enough for a 14-inch screen

The 14-inch display is a tad underwhelming. The resolution of 1366x768 is slightly higher than 720p, but it’s a little lower than I was expecting. A full HD display would certainly have been appreciated, but the 768p display is still acceptable.

The display fared badly in our black level test, average in white levels and excellent in the contrast ratio test. The display’s response time is also not that great, but this isn’t a gaming laptop and I can live with that last.

Better viewing angles and a higher resolution would certainly be appreciated, but the overall image quality is decent. I was also happy with the fact that the display has a matte finish.

I used the laptop as my main PC for a few days, primarily for office work. This involves using Chrome with 30-50 tabs open at any given time, heavy Microsoft Word and light Photoshop use. In all these tasks, the laptop performed well. Again, I’d have loved to see an SSD instead of an HDD, which really slowed down load times and response, but if you can live with that, you’ll be fine. There were random slowdowns when using programs like Word, but these issues are inherent to HDDs and if they bother you, pick the option with an SSD.

There was always plenty of performance on tap for my work. Light gaming is also possible.

Games like CS: GO and GRID: Autosport gave me playable frame rates at 720p and low settings. The laptop never got hotter than was comfortable, even when using on my lap. System temperatures were also within reason, even under load.

The speakers are not exceptional, but they’re loud and clear enough to enjoy a movie or show without enabling subtitles.

In our standard PCMark 8 Home Battery Life test, the laptop managed 2 hours and 25 minutes. This is very low for a laptop without a GPU and we’re used to seeing scores in the four-hour range. For work use, I found that the laptop managed about four hours without dying. This is quite low when other laptops in this class manage around six hours or more.

The Lenovo Ideapad 520S is a nice laptop at a reasonable price of Rs 48,300. The screen quality could have been improved and the laptop could do with an SSD (or at least a hybrid drive), but these issues aren’t deal breakers.

Given its low weight, decent performance and overall build quality, this is a laptop I would happily recommend to anyone looking for a device in this price range.

The best laptops of 2017: ASUS takes the Ultrabook crown, MSI and Lenovo fight over gamers