If you're looking for the thinnest and lightest 15-inch Ultrabook out there, you've found it.

The ASUS Zenbook 15 is thin and light and very powerful, but it also comes with some ergonomic flaws that could be its undoing.

If you’re planning on dropping upwards of a lakh on an Ultrabook, you’re looking for a slim and light device that’s as powerful as it is stylish. Form takes precedence over function.

For the past few months, my go-to recommendation has been the 2018 13-inch TouchBar MacBook Pro (TB MBP) from Apple. The Pro’s stunning display paired with a powerful CPU and classy design mean that the recommendation was a no-brainer. With Windows laptops finally catching up on the hardware front, it’s time to rethink that recommendation. 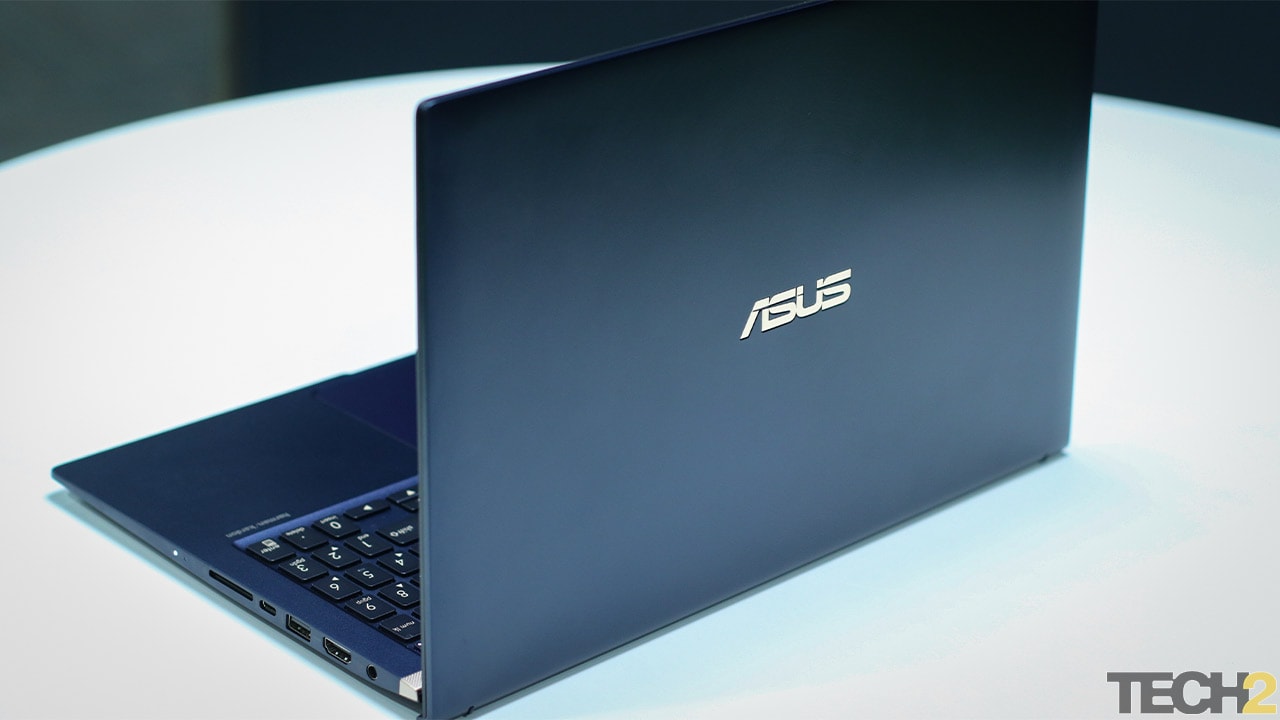 Design aside, my primary reason for recommending the MacBook Pro is its performance and battery life. It might seem hard to believe, but the 2018 TB MBP is one of the most powerful laptops you can buy today, handily beating out just about anything in Windows land. The secret to the Pro’s performance is its 25 W CPU and Iris Plus 640 graphics, a combination that you will not find on a Windows machine in its class.

Do note that this a 13-inch device I'm talking about. Until recently, recommending a 15-inch device as an Ultrabook seemed nigh unthinkable, but that might change with the ASUS Zenbook 15 UX533F. The laptop’s name might not be particularly imaginative, but that doesn’t mean that this 15-inch device isn’t compelling.

Featuring vanishingly small bezels, a dedicated NVIDIA graphics card and a 15-inch screen in a form factor normally reserved for 14-inch laptops, there’s a case to be made for the Zenbook 15 as the ideal Ultrabook of 2019. If it weren’t for a couple of design faux pas, this might certainly have been the case.

Given that the star of the show is that widescreen 15.6-inch display, and the fact that the bezels are tiny, the device is a rather elongated rectangle.

As befitting a high-end Ultrabook, the body is covered in metal and the laptop is quite slim and acceptably light at 1.67 kg. 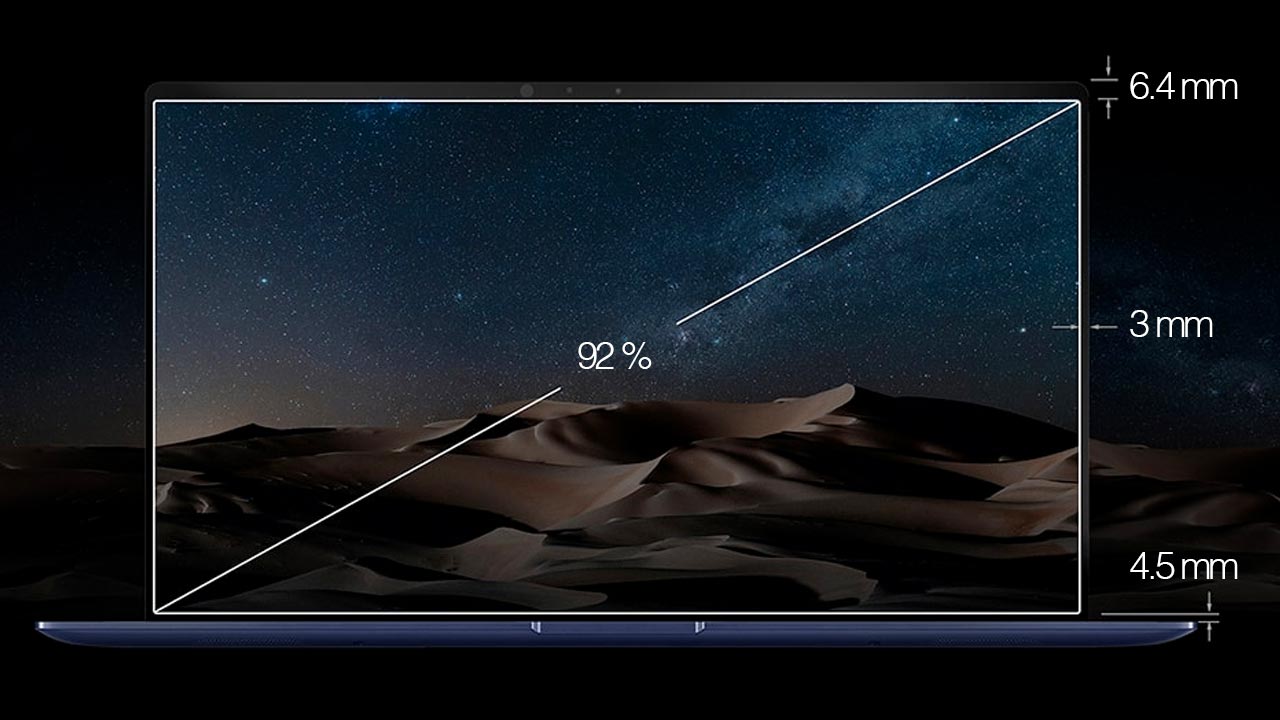 The laptop we received came in a sort of navy blue shade, which is nice, but it had this rather jarring rose gold cap of sorts running along the length of its base, near the display. I assume the plastic is there to allow radio signals through (Wi-Fi), but did it have to be such a shocking shade of gold?

Another unusual feature is the L-shaped display panel. The display unit overhangs the rear of the base and has a 90-degree bend in it. When opened, that 90-degree bend raises the laptop off the table, thereby improving airflow and raising the keyboard, making it a tad easier to type on. ASUS calls this the “ErgoLift hinge”. It’s a great idea, but it also has a subtle issue, aka design faux pas #1. That L-shaped hinge profile can sometimes trap skin and cloth.

That gap between the base and the bend is about half a centimetre when the laptop is closed. When the lid is opened, that gap reduces to a fraction of that. Given its design, it’s easy to get your skin or dress caught in the mechanism. You’ll get used to it soon enough, but the mechanism could simply have been better designed, to begin with.

Design aside, the laptop feels well built and sturdy with hardly any flex in the chassis or display. ASUS, in fact, claims that the laptop has been tested to mil-spec standards.

Design faux pas #2 is found with the placement of the trackpad. But first, the good stuff.

The keyboard is a fairly standard design and feels good to type on. There’s a decent amount of key travel and the response is nice. Since the laptop is so wide, ASUS has even managed to squeeze in a full-size numpad here. The trackpad is set to the right of where it needs to be, making the keyboard uncomfortable to use.

The trackpad by itself is good and tracks well, but the problem is its central placement.

When using a laptop, one tends to place their hands over the alphabet keys with the thumbs hovering over the space bar. Because the keyboard is so wide, the space bar and the bulk of the alphabet keys are to the left, which means that you will type with your hands to the left. This, in turn, means that when typing, the centrally located trackpad is to the right of where it needs to be and that the base of my right thumb tends to rest on it when typing. Making this even more frustrating is the fact that palm rejection is awful and I’d find the mouse cursor dancing all over the screen as I’d type.

This, for me, is a deal breaker.

The one thing that’s unassailable is ASUS’ choice of hardware. You get an Intel Core i7-8565U CPU, 16 GB of DDR4 RAM, an NVIDIA GeForce GTX 1050 Max-Q GPU and a 1 TB PCIe SSD. The RAM and CPU options are pretty mainstream in this class and it’s the addition of an NVIDIA GPU and that 1 TB of ultra-fast storage that sets this laptop apart. There's a good amount of I/O, but the lack of Thunderbolt 3 does pinch a bit.

The display is a 15.6-inch FHD IPS unit in a 16:9 aspect ratio and the speakers are certified by Harman/Kardon.

The webcam is sensibly placed on the top of the screen and features 3D infra-red sensor for face unlock functionality.

The 15.6-inch FHD IPS display on the Zenbook 15 is bright and pleasant to look at. ASUS claims it’s rated at 100 percent sRGB, which is a fairly standard colour range. The 2018 TB MBP can certainly display more colours, but for a Windows machine, the Zenbook has a nice display. ASUS claims a screen-to-body ratio of 95 percent, and looking at the device, I’m inclined to believe them.

The display is bright and pleasant, but also very reflective.

Speaking of bezels, the bottom one is actually quite large but ASUS has managed to hide it very well by moving the hinge mechanism a little closer to the user and away from the edge of the panel.

I had fun watching movies on that vibrant panel and even work wasn’t such a chore on 15.6 diagonal inches of real estate.

The display is quite bright, but it’s also very reflective, making it a little irritating to use in something like an office environment.

I enjoy putting computers through their paces and when you have a device as powerful as this one, it becomes a real pleasure.

Bearing in mind that we’re talking about an Ultrabook and not a gaming laptop, the Zenbook 15’s specs are impressive. The i7 CPU here is outclassed by the i5 CPU on the 2018 TB MBP, but the NVIDIA GPU more than makes up for the shortcoming.

The GTX 1050 is normally an entry-level graphics card and we’ve only seen it in budget gaming laptops. To fit it into the thin and light Zenbook, ASUS opted for the more power efficient Max-Q configuration, which is NVIDIA-speak for a graphics card that’s optimised for power efficiency rather than raw performance.

That said, there’s plenty of performance on tap for light gaming. Games like PUBG and Fortnite are indeed playable at low settings (45-60 fps), and even heavier games like Shadow of the Tomb Raider are playable (60 fps) at medium-low settings at 1080p.

The included SSD is as generous in capacity as it is fast. It’s an NVMe PCIe SSD, which is geek-speak for “blisteringly quick”: the read and write speeds of 3,400 Mbps and 2,400 Mbps were the fastest we’ve seen yet from any laptop. The Zenbook is a capable performer.

ASUS has also done some clever things with the fan, keeping the laptop running relatively cool and quiet even when under load. Things tend to heat up when gaming of course, but this is to be expected.

The speakers are loud and the audio doesn't tear at higher volumes. There's an expected lack of bass and mid-range, but the overall audio quality is good enough for movies and TV shows.

The net result is a laptop that feels brilliant to use. The Zenbook 15 is fast and responsive and as long as you’re not into heavy gaming, is more than adequate for anyone. In fact, it’s almost overkill.

The only thing that worries me is that the Dell XPS 15 retails for the same price and packs in a more powerful CPU and a more powerful GPU. It is thicker and heavier, but it’s also far more capable. Battery life on the Zenbook is by far its biggest strength.

I was pleasantly surprised to find that the Zenbook 15’s battery life matched its performance chops. Normally, the inclusion of a discrete GPU means that battery life will suffer. Not so with the Zenbook 15. I could easily extract 7-8 hrs of light work from this machine, and even under heavier loads, where I had about two dozen Chrome tabs, Word and Photoshop running, I could eke out about five hrs of use. The standardised PCMark 8 battery life test indicated an expected battery life of 4 hrs 36 minutes, which is also the highest battery life score we’ve seen in this class of device.

The bundled 90 W charger took about two hrs to charge the laptop.

ASUS has done great work in putting this laptop together. The performance is top notch, the battery life is great and the form factor makes this device satisfyingly portable. However, the unergonomic trackpad placement and the looming spectre of the more powerful Dell XPS 15 mean that I cannot blindly recommend the Zenbook 15.

If you don’t type much or you tend to use a mouse, the Zenbook 15 is a great choice. If you’re looking for something more capable, though, the Dell XPS 15, which is priced from Rs 1,36,390, is the one you want.