This is a comprehensive review of the instax Mini 9, the 'instant photo' system by Fujifilm. Fujifilm instax Mini 9, the latest 'instant photo system' from the company was launched on 15 June 2017. This launch comes more than two years after the company launched the instax Mini 8, Mini 25, Mini 50S and Mini 90. 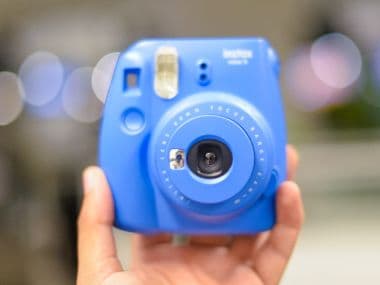 The company is trying to renew its focus on the Indian market with a different product category. According to S M Ramprasd, head of department for Image Capturing at Fujifilm, the company is working on bringing other instax ‘instant photo system’ products like the instax mini 70, instax SQUARE SQ 10 and instax WIDE 300. The reason for this renewed interest is because the company wants to create a strong hold in one of the largest markets for electronics.

After the launch of instax Mini 9, the company sent us one unit for review. I used the ‘instant photo system’ for about more than a month, taking it along with me to almost everywhere from the office to weekend meetings with friends and trips. I tested the camera under a wide variety of situations capturing a wide range of subjects that one can come across. After extensive use, the instax Mini 9 has left me somewhat impressed and I know why the instax series has the potential to reach the mainstream.

The instax Mini 9 is leveraging its philosophy of ‘kawaii’ in Japan which translates to ‘cute’. The company is focusing on the ‘cute’ form-factor of the device to ensure the overall success of the camera. The build quality of the camera is solid and sturdy. There are no squeaking parts except the dial in front of the camera to adjust the exposure in the photograph depending on the scene. The camera is considerably bulky when compared to modern digital cameras, smartphones, mirror-less cameras or even entry-level DSLRs. Its dimensions measure at 116 mm x 118.3 mm x 68.2 mm along with 307 gm of heft. 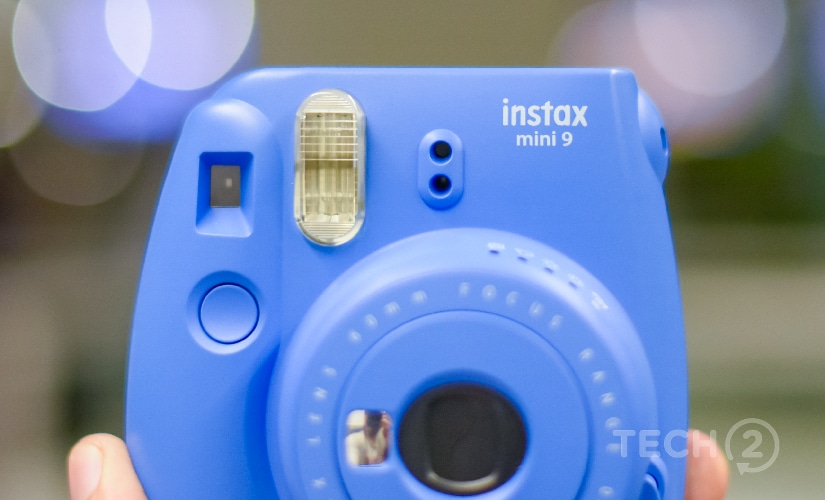 Mini 9 comes with a simple design with no complicated levers or dials making it extremely user-friendly. The device packs a mirror known as the ‘self-portrait mirror’ right next to the camera lens. The mirror and the camera lens are situated on the lens barrel which in turn is surrounded by the ‘Brightness adjustments dial. 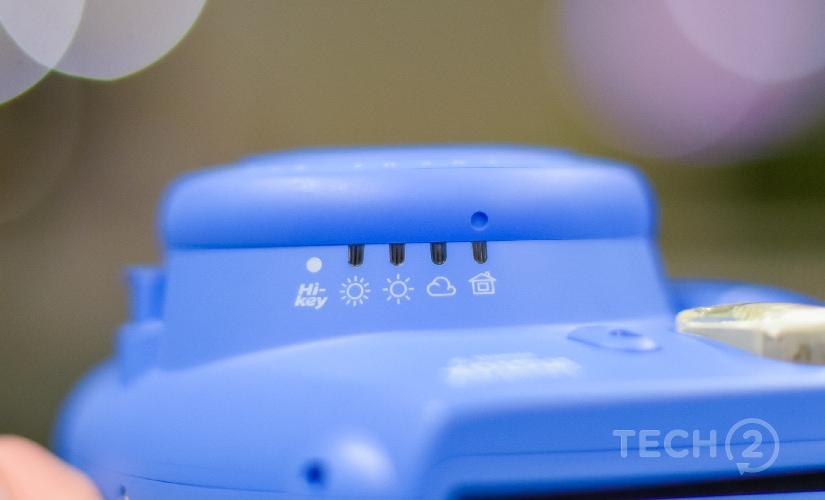 You can adjust the dial according to the ‘Brightness indicator’ present towards the upper right size. Users can find the power button at the lower right-hand corner of the camera from the front. 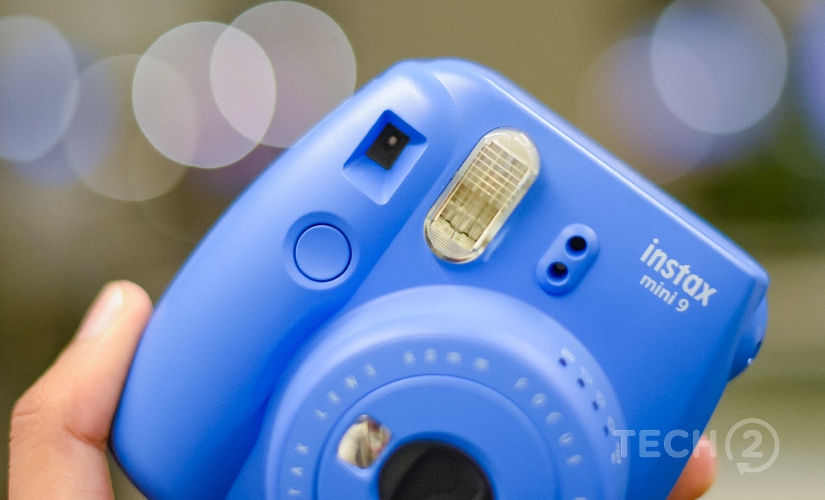 On the top of the camera barrel, you will find the light sensor which is just right to the ‘flash lampface’. This ‘flash lampface’ is the one and only flash unit on the camera. The flash unit is high in intensity and can be temporarily blinding right after the picture is clicked. 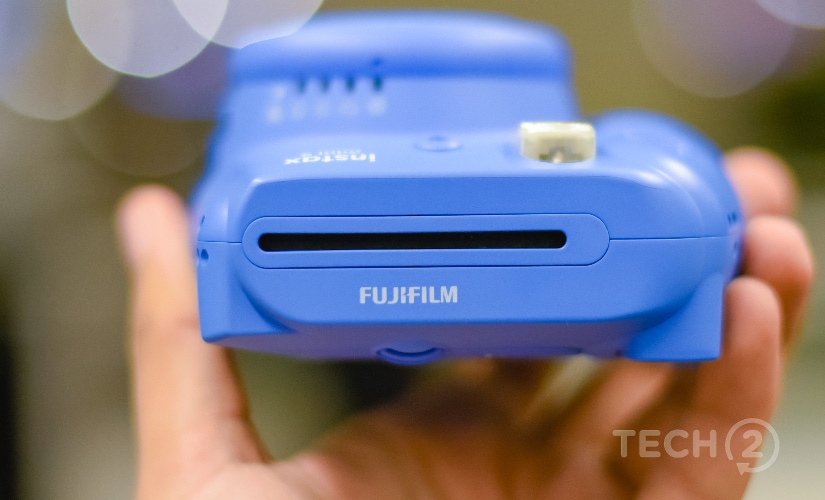 Fujifilm has also added the ‘Viewfinder’ and the ‘Shutter button’ on the front of the camera towards the top left corner on the camera. You will find the viewfinder and below that the shutter button. Any picture that you click will come out from the top of the camera from the ‘Film ejection slot’. 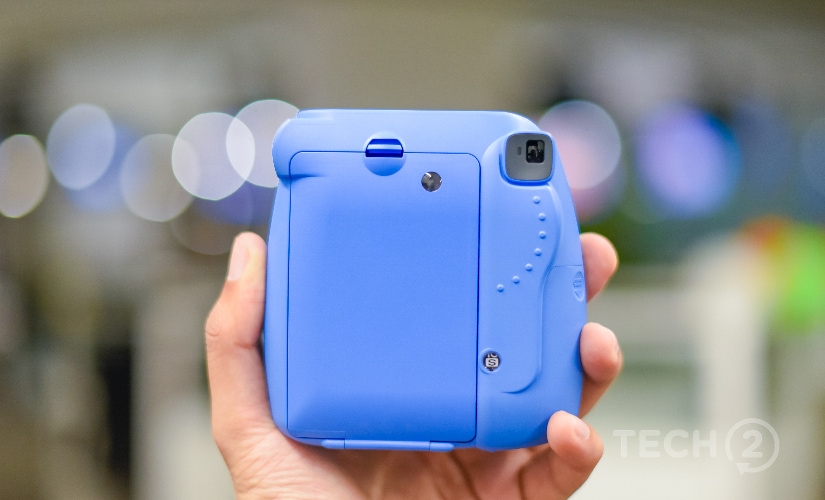 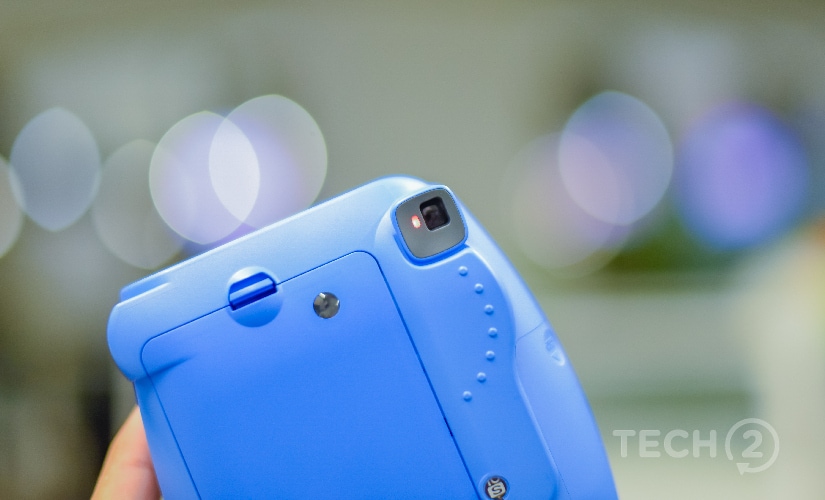 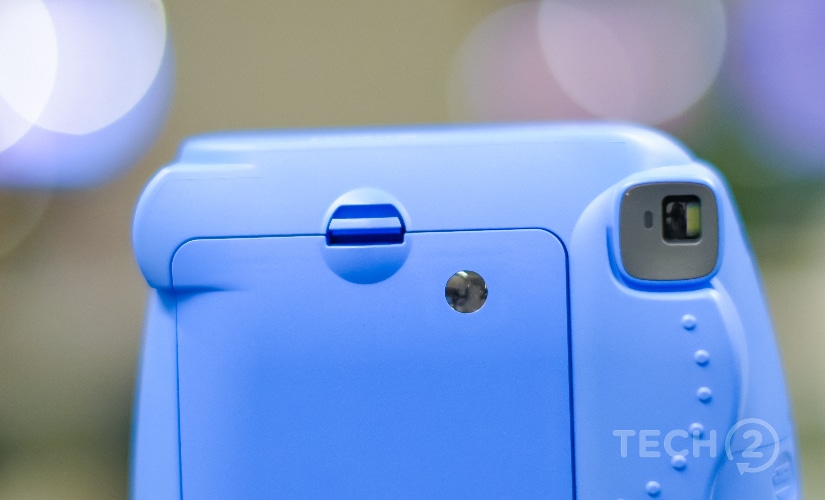 There are two additional indicators on the back, the first one on the back cover so that you can confirm if the camera has a film pack without the need to open it. The second indicator is at the bottom towards the right side. It informs the number of films left in the current film pack. Last but not the least is the battery lid which is present on the right side of the device from the back. One thing to note here is that the camera is powered by two standard AA dry-cells 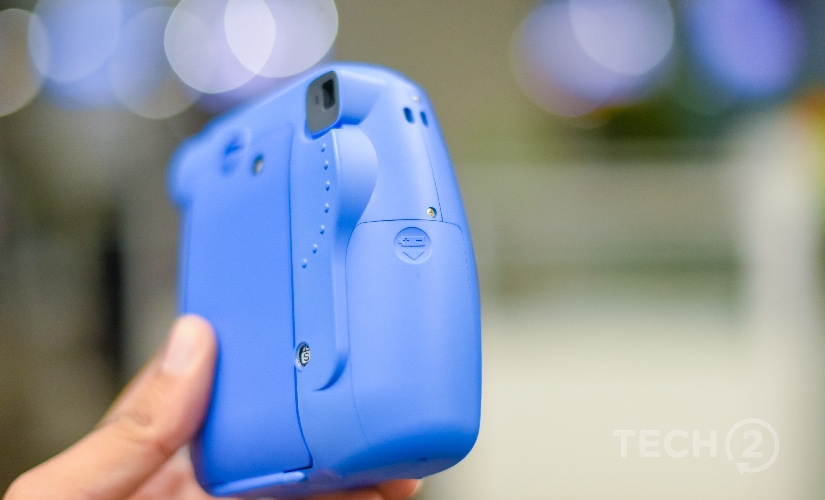 Mini 9 prints photos on a Fujifilm instax Mini film with 62 mm x 46 mm dimension. Its lens comes with two lens components and two lens elements. The effective focal length of the camera is fixed at 60 mm along with 1:127 magnification ratio. It sports a glass image finder that includes a target spot to help the users ensure that the subject is in the centre of the photo. The instant camera can shoot images from a minimum distance of 0.6 m. 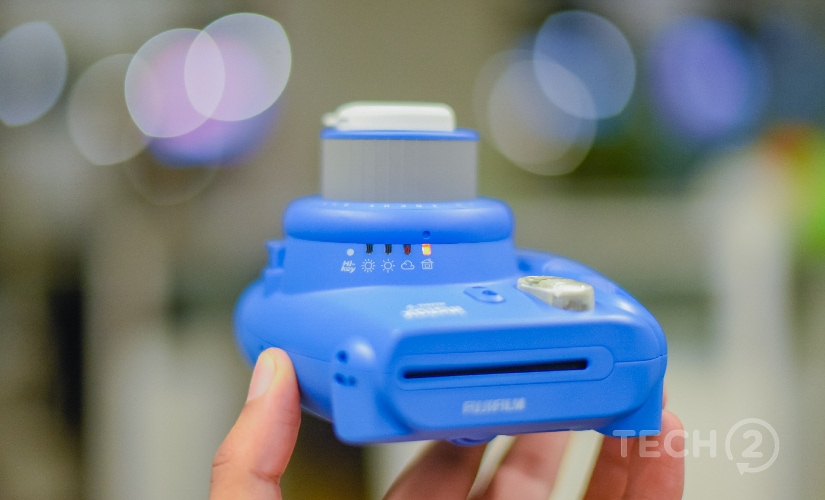 The camera has a fixed shutter speed of 1/60th of a second with a manual switching system to control the exposure of the photos. The camera works on a cartridge based system where the films are loaded in the form of cartridges with an automatic feeding out. The film needs 90 seconds to develop depending on the room temperature of the photo.

While handling the cartridges do not expose them to bright light or direct sunlight. If the black surface of the film turns white this means that that particular film can't be used. To ensure this, do not take the cartridge out of its silver cover if you don't need it. If you need to change the cartridge, take it out and replace it while in shade, away from direct sunlight. It comes with a constant firing flash that can’t be turned off. The camera uses a light sensor to adjust the light of the flash. It would take up to 6 seconds for the Flash to charge after one photo. The flash is only effective in a short range from 0.6 m to 2.7 m. It is powered by two AA-sized 1.5V alkaline batteries. To conserve the battery the camera powers off after 5 minutes of inactivity. The included close-up lens attachment allows users to take close-up shots from up to 35 cm. 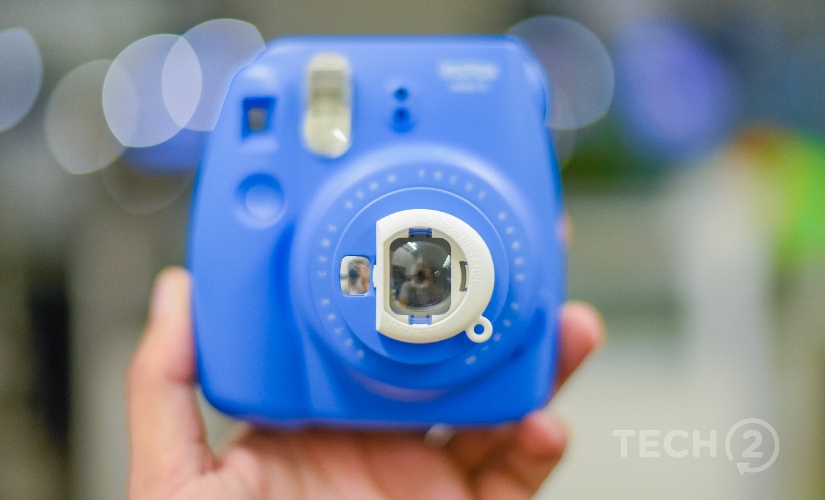 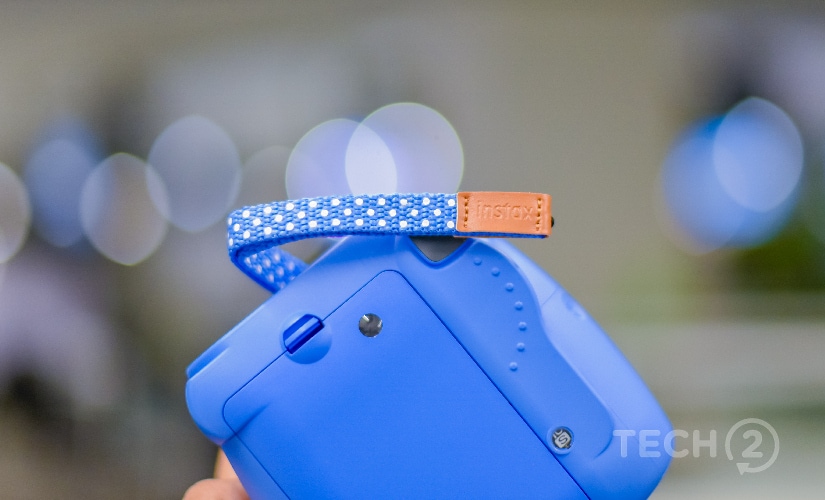 There is not much to talk about the quality of the camera sensor because there are no digital copies of the images to dive in on chromatic aberrations, distortion or noise. The Flash unit on the camera can’t be turned off and obstructing it will result in underexposed images. The unit also takes time to charge so you can't take pictures in rapid succession. The recharge time for the Flash unit may vary from 0.6 seconds to 6 seconds in some cases. It is not possible to capture pictures of large hallways or interior rooms as everything is overpowered by the powerful flash unit. Clicking pictures in board daylight may not give much advantage in terms of the better lighting. One thing that persists is that every picture that you capture using Mini 9 is unique. The realisation that every picture and moment are unique, and have a price associated with it, has the promise of making you a more discerning photographer. The way you shoot with the instax Mini will be quite different in the way in which you shoot using a DSLR or your smartphone. 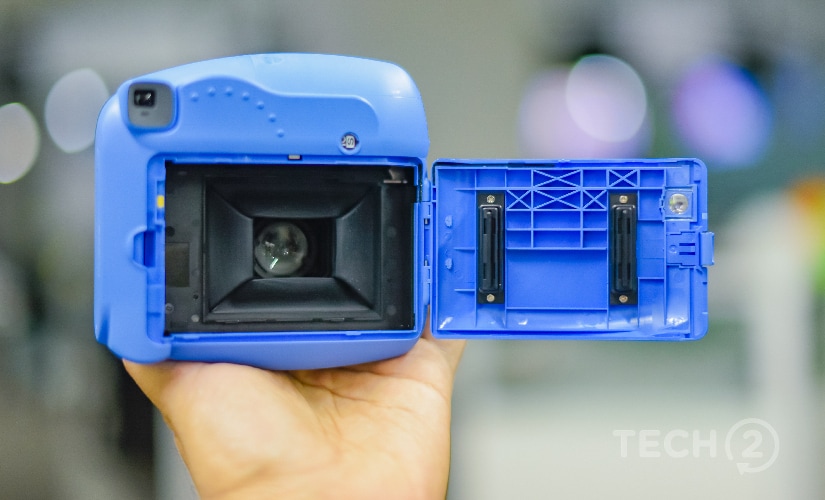 During the period of the review, there were a number of instances where I wished that my expressions were better in the picture or the angle of the frame was better. The perfectionist in me cringed at most of the pictures that I shot using the camera, but gradually I made peace with the imperfections. All said and done, the instax Mini and other related cameras are meant to have some eccentricities in the final print of the photo. The whole idea is to have a physical print of a memory. If you want perfection, then you will be well advised to look elsewhere. The ‘instant camera system’ really meant instant, raw and as it. There was no posing, preparation or retakes, which is what Fujifilm is selling us in this world of Instagram and digital cameras where people have the privelege of retakes to ensure that every photo is made to look perfect. The ‘human’ nature of pictures, of mistakes and errors, is brought back to the camera which was sorely missed in the world of live-view filters and ‘beautification’ modes. 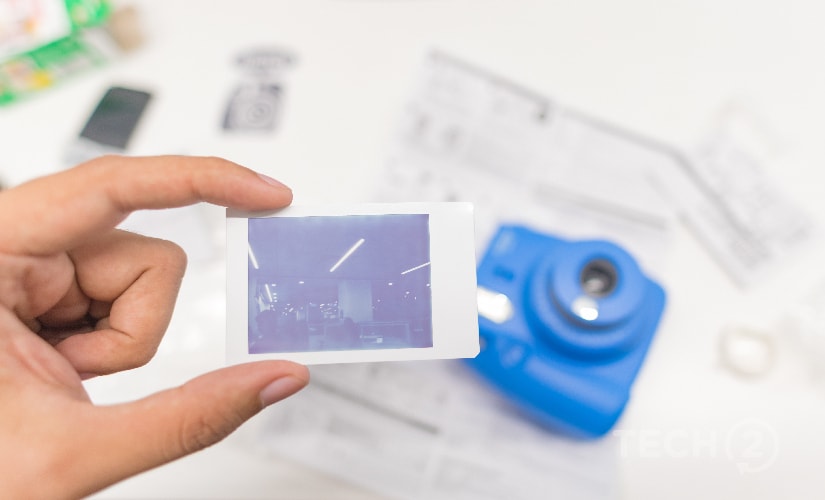 Moving on to the print quality of the pictures, right out of the camera, it takes about 2 minutes for the photo to develop completely. The final, fully developed pictures have a soft look to them which is similar to the ‘soft focus’ pictures which we had with film cameras. The film does not retain much detail, and isn't contrast heavy. The experience of holding the physical print right after the picture is shot makes everything look retro. If you have used a film camera and beheld a print from that Kodak 36 roll, you will know the pleasure of having physical prints. 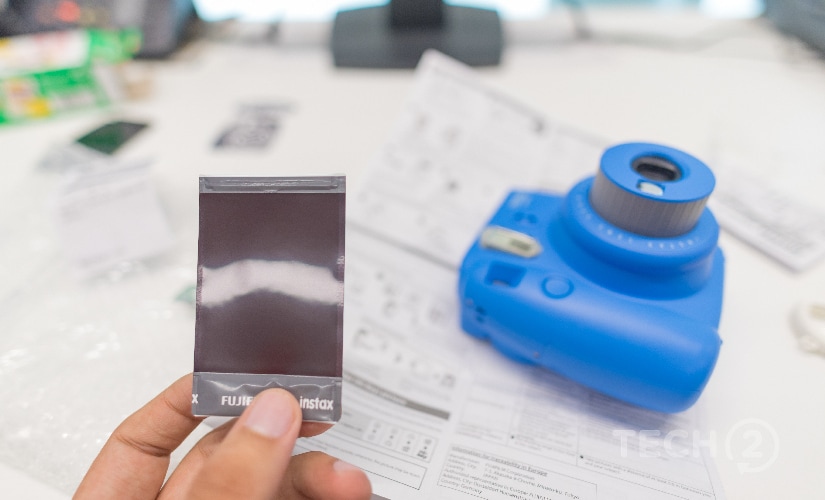 The most important part of the printing experience was yanking the print in the air while waiting for the colours to develop. This gave the picture a whole other level of physical immersion in the process. Even though the yanking is not required and the film will develop without any external aid. But, it does give strong throw backs to the ‘instant-film’ Polaroid photographers who used to roam at monuments and popular tourist attractions back in the 1990’s before the rise of the digital camera.

Fujifilm has priced the Mini 9 at Rs 5,999 in the Indian market. The price point makes it a compelling buy along with the retro experience that Fujifilm is selling along with the package. One thing to note here is that this is not for people who want the perfect shot with a perfectly exposed picture with accurate colours and spot on framing. Instead, it is for people who won’t mind the over-exposed pictures with blown out details and soft look because of the overpowering flash. It is for the people who want a unique souvenir to capture a moment or meeting. It is for people who would rather live and appreciate the uniqueness of each moment. The overall experience may even teach some people especially photographers about the how it was like in the days of film and how quality over quantity should be emphasised. The company is banking on the cuteness factor and the retro factor of the camera. During the long review period, about half the people that I met and clicked using the instax Mini 9 were really excited to see the camera. They termed the camera ‘cute’ and were interested in getting one. That is all good if you have Rs 5,999.

But you also have to know that a film pack of about 20 film paper costs Rs 1,000. That amounts to Rs 50 per picture to sustain the hobby, in addition to a proper storage space like an album for the developed photos. The price point is certainly on the higher side if you take into consideration the total cost of ownership. So you need to be ready to shell out Rs 1,000 every time you are out of photo paper.

Note: This is the first 'instant photo system' that we are reviewing and one of its kind product in the camera category with respect to the features, build quality and image quality. We have changed our rating system to give a cumulative rating to the product instead of giving separate ratings to different sections as standard practice.