FiiO F9 Pro’s are no doubt a delight to have and listen to. The music really stands out well with a fuller and meatier sound to it. Highs are a bit exaggerated

If you want really good earphones and will use the balanced 2.5mm cable with the appropriate equipment then you definitely are an audio enthusiast who wouldn’t mind shelling the extra buck. If you have finally settled on FiiO F9 sound and don’t care for the extras, the F9 SE would suit you just as well.

FiiO is a Chinese audio company founded in 2007 that literally wants to raise the bar for “Made in China”. This isn’t just aspirational but rather something that they’ve achieved with their line of audio products, all the way from basic audio solutions to high-end premium grade sound with earphones, DAC’s and music players. Today we listen to their premium F9 Pro over-the-ear earphone to see whether they indeed break the Chinese myth.

The entire package of FiiO F9 Pro’s is very interesting indeed. FiiO has thrown a lot into the box (more on that later).

The F9 Pro’s are quite stylishly designed. The outer shell is aluminium and is hand polished. The ridges on the earphones aren’t just for show. FiiO claims it is inspired by something as simple as water, the ridges on the surface are nothing but ripples that occur in water. These are not only for aesthetics but also to ensure structural strength while creating more space inside, securing the drivers better and eliminating internal resonances in sound. The snug and secure over the ear fit.

The design is over the ear and fits really snuggly. I loved the grip, it was practically impossible for it to fall off with hard tugging. However, the downside is that it does get a little cumbersome to remove and put on if you have to make conversations with people in the midst of listening to music. 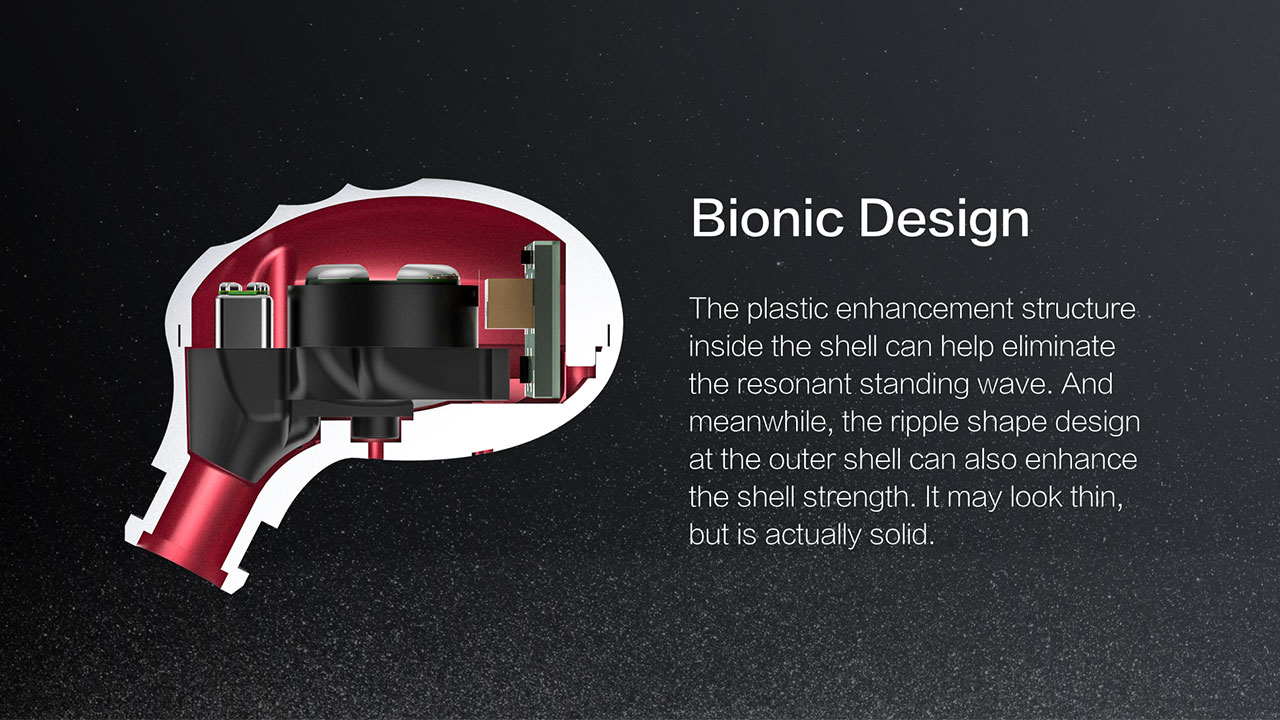 The FiiO F9 uses a lot of tech which they happily tout about. It’s a triple driver hybrid design, meaning it uses one dynamic driver (which mostly all headphones/earphone and speakers do) and two Knowles Balanced Armature (BA) drivers (know more about it here). 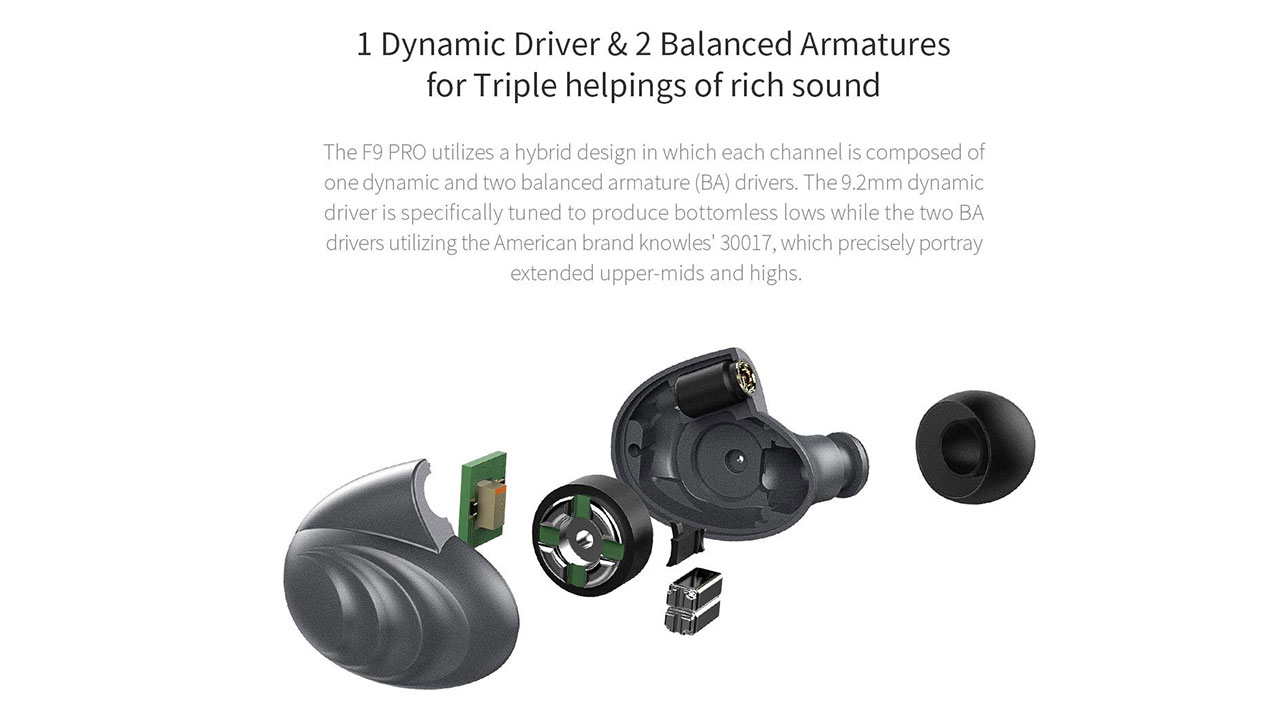 Literally 3 speakers in one design.

The F9 Pro’s come with two interchangeable cables using standard MMCX connectors, one is the standard 3.5 mm earphone cable with mic and second is a 2.5mm silver-plated copper wire with two separate wires that are intertwined together. The reason for doing so is to achieve much clearer left and right channel separation to give a richer sound. Unfortunately, we couldn’t test that as we don’t have a 2.5mm device on us to hear the difference. For those who care and do, you’d most certainly gravitate towards this. 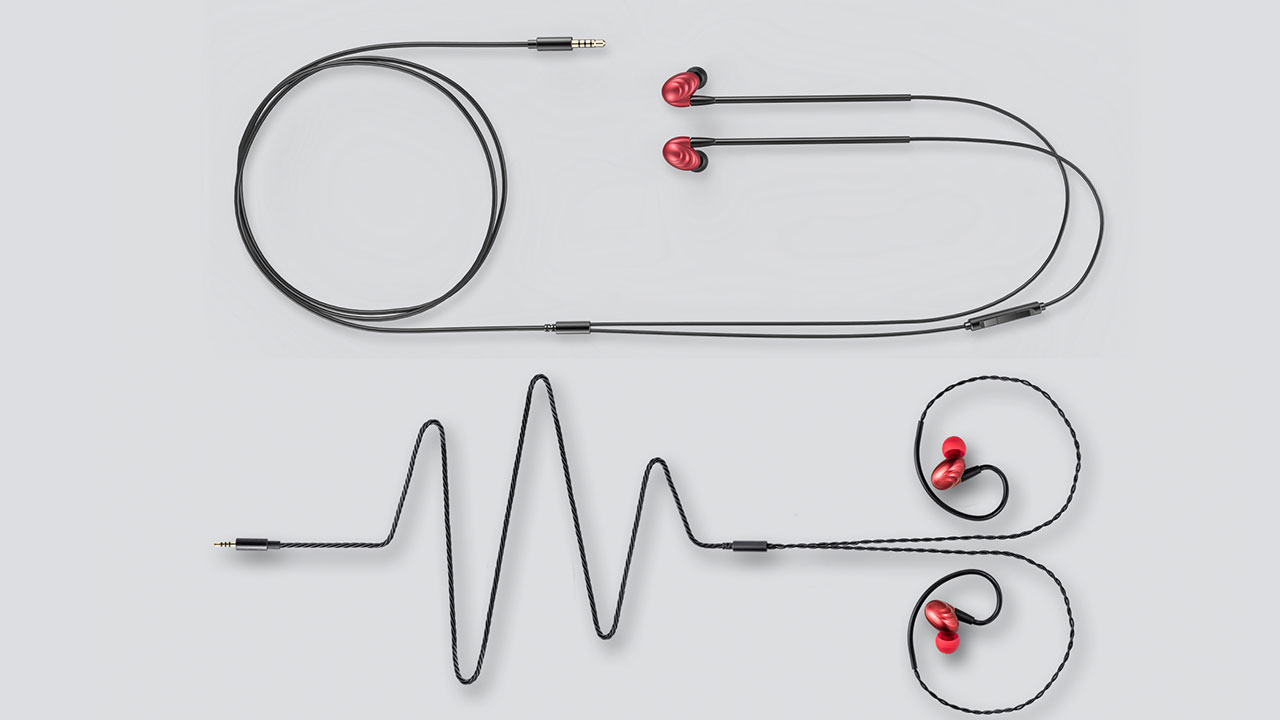 We’ve had other audio manufacturers offering numerous accessories (see Brainwavz S3 review) with their earphones but not like this. FiiO has really and thoughtfully put everything in the F9 Pro package that an audio enthusiast would want just short of the kitchen sink. Eeniee meenie miney mo which one should I take today.

FiiO F9 Pro has been tested with an Android mobile phone and a Windows PC with FiiO Q1 DAC Amp with MP3’s as well as FLAC files from western classical, pop, hard rock, and instrumental genres.

The FiiO F9 Pro has a well-balanced and really enjoyable sound without getting fiddly with the EQ. By well-balanced we mean, not analytical flat sound but a sound which a music listener will enjoy. If you see the chart below, it shows the capable frequency performance of the earphone. 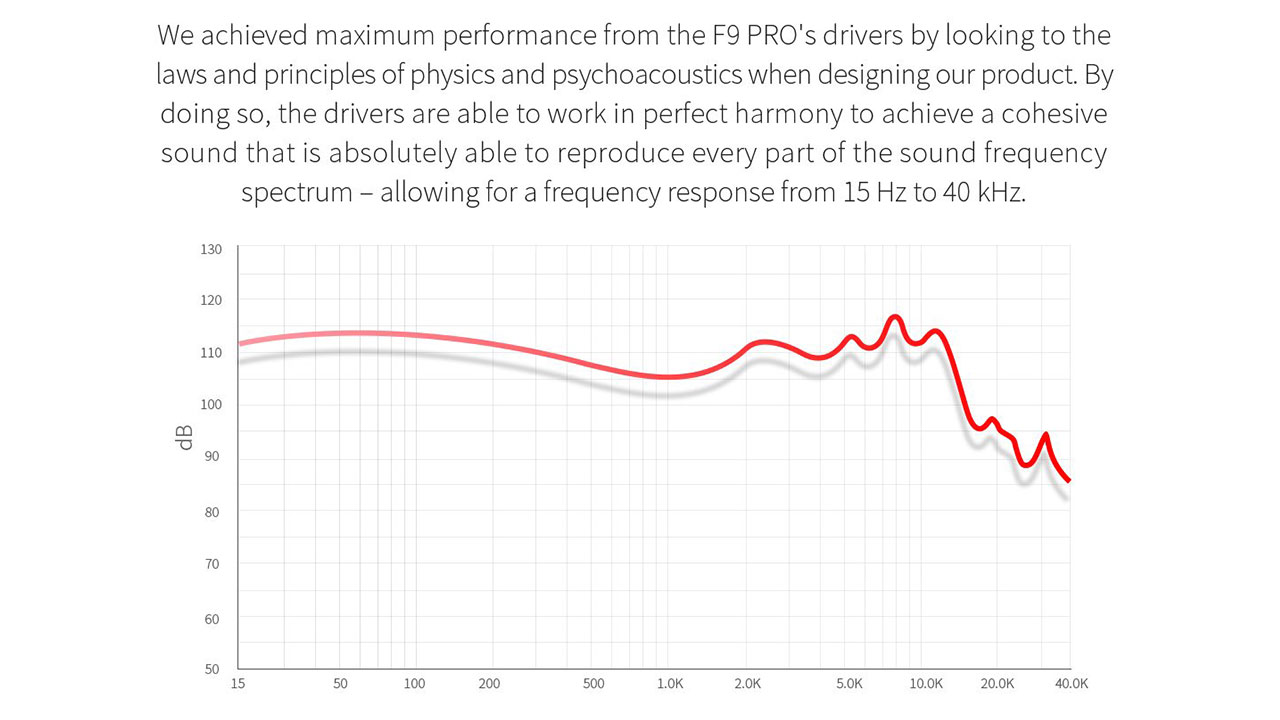 As you can see, the chart shows a slight bump up in bass from the left to a little-recessed sound in the mids section in the middle with the spikes in the highs. What does this all mean?

FiiO F9 get the bass right without exaggerating it, unlike some earphones like Sennheiser CX3.00. The mids are strong and support the other frequencies well, while the highs felt a little exaggerated but not by much.

Apparently, the folks at FiiO balanced the highs of F9 Pro after users reported sibilant highs from the F9 (non-pro) edition. So expect a slight deviation in sound when comparing F9 and F9 Pro. However, by themselves, the F9 Pro sounded a little harsher to my ears especially in hard rock music where I had to turn the highs down a wee bit to enjoy the music.

Due to the way the highs are in the FiiO F9 Pro, the acoustic guitar really stands out with clarity and sharpness to the sound. This is what many folks loved in the F9 (non-pro) edition too albeit with the exaggerated highs.

The call quality is excellent. The voice is very clear, the s’s and sh’s roll off well. Due to the good seal that the earphones provide, passive noise cancellation is good. Though the over-the-ear design would work well during physical activity such as walking or running, it is not recommended as outside sounds get sufficiently blocked and therefore traffic awareness would reduce. FiiO F9 Pro’s are no doubt a delight to have and listen to. The music really stands out well with a fuller meatier sound to it and sounds clearer and cleaner when played.

So are the F9 Pro’s worth it for refinement in sound and extra accessories?

That answer is typically up to you. If you want really good earphones and will use the balanced 2.5mm cable with the appropriate equipment then you definitely are an audio enthusiast who wouldn’t mind shelling the extra buck. If you have finally settled on FiiO F9 sound and don’t care for the extras, the F9 SE would suit you just as well. Either ways, you certainly won’t be disappointed.

SAP to cut 3000 jobs or 2.5 per cent of global workforce, plans to sell remaining stake in Qualtrics