If you only listen to music and podcasts while working out or while commuting, Bose has achieved its goal. If you expect anything else, however, Bose has failed. I must admit, I don’t like Bluetooth headphones. For someone who really enjoys listening to music, Bluetooth headphones just seem like an unnecessarily expensive convenience product. Why spend Rs 19,000 on a pair of average-sounding Bluetooth in-ears when you could subject yourself to the sublime glory of something like a Beyerdynamic DT-880?

Despite my reservations, however, I went ahead and bought myself a Bose SoundSport Wireless set last year. My reasoning was simple: I travel 2-3 hours every day and wires are a major hassle on the train (they can get caught, and then subsequently ripped off). I also had an iPhone 8 by then and since Apple ditched the headphone jack, a Bluetooth set was an easy choice to make.

Now I really liked the SoundSport Wireless. It wasn’t the best-sounding set out there, but it was pleasant enough and good enough for the daily commute. My biggest issue with the set was that its battery life was a constant source of frustration. The problem wasn’t the battery life itself, but the constant worry that I’d run out of charge. Did I charge my headphones before leaving? Will it last me through this captivating podcast? That worry coloured my listening experience.

When Bose announced the SoundSport Free, I was intrigued. The set came with a charging case — which meant that I wouldn’t have to worry about the charge — and it was a truly wireless set. There were literally no wires, not even between the two earbuds.

It’s the perfect upgrade, right? In many ways, yes. One egregious flaw, however, completely put me off the SoundSport Free.

In terms of build and design, the Free feels more solid than its predecessor. The ear tips are extremely soft and as comfortable as Bose ear tips have always been. The fit is so good and the set so comfortable that a lot of the time, it was easy to forget that there was something in my ears. It is prudent to add, however, that the fit is not for everyone. Some of the folks who tried the set just couldn’t get the ear buds to remain anchored. I’d like to add that the set is quite bulbous. The earbuds stick out of your ears like over-sized pop-corn and the case is so big that you can’t comfortably put it in a pocket. Because they’re so comfortable, I don’t mind parking the earbuds in my ears when I’m not using them, but I’d much prefer a pocketable case to Bose’s current design.

The case doubles as a charging pod and the earbuds settle magnetically into the slots. The button that pops the case open also doubles as a trigger for a series of indicator lights that show how much charge the case is holding. White LEDs on the inside of the case let you know when the earbuds are charging. As with the old set, the buttons are once again a sore point, but they’re still an improvement over the ones on their predecessors. You get a connect/power button on the left earbud and the volume and play/pause buttons on the right earbud. This is fine, except for the fact that the buttons are extremely stiff. The buttons are so stiff, in fact, that I ended up ignoring them and pulling out my phone every time I wanted to switch tracks or adjust the volume. This partially defeats the purpose of having truly a truly wireless headset in the first place.

The button on the case is equally frustrating and usually doesn’t pop open unless you press it hard. 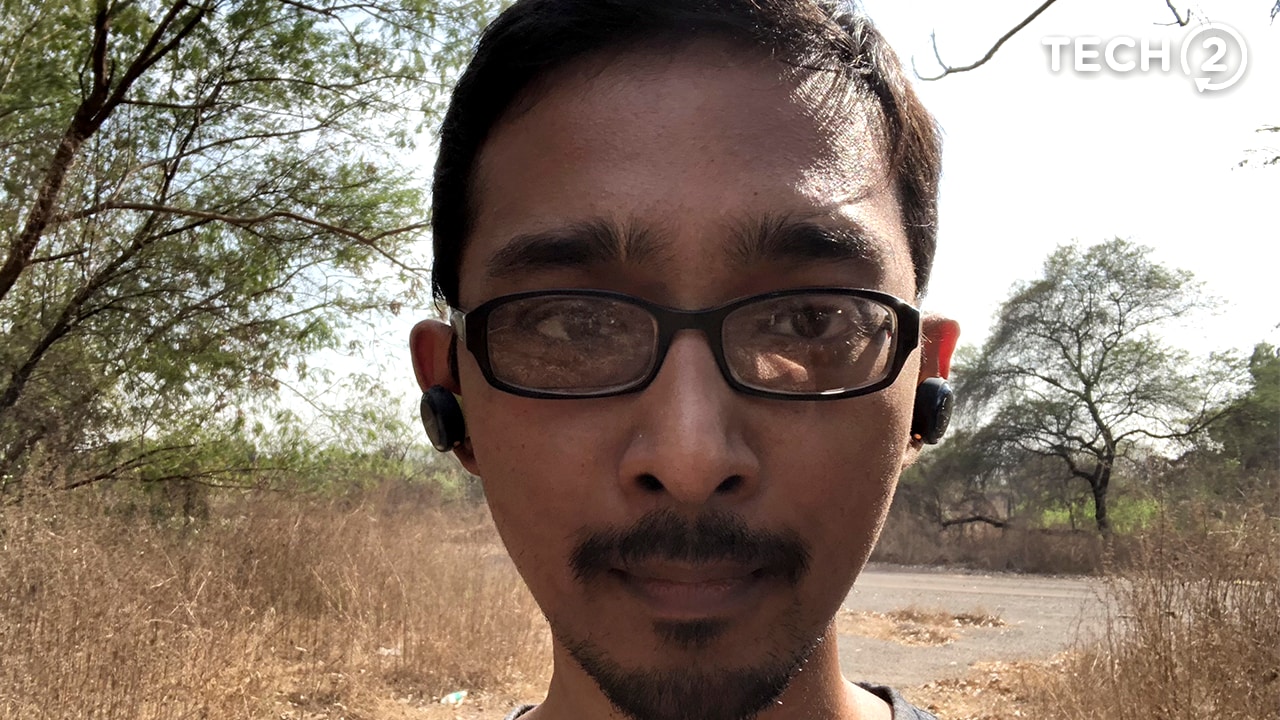 Bose SoundSport Free earbuds are quite bulbous and stick out, but aren't noticeably heavy. Image: tech2

If you’re familiar with Bose audio products and you’re happy with them, you’ll be happy with the SoundSport Free. If you’re not, you won’t like them because they don’t do anything different in the sound department.

I found the audio quality of the set to be good enough for non-critical listening, good enough for when you’re distracted by other things. For example, for listening while jogging or while on a commute, it’s very good. The ear tips don’t isolate noise and you’re quite aware of the surroundings, but this also helps hide the deficiencies of the set in the audio department.

While paying close attention to the audio though, I noted that the bass tended to boom and that the vocals would get a bit shrill. Again, you won’t really notice this while jogging or travelling, but it’s something to keep in mind when you’re shelling out Rs 19,000 for an audio product. Sitting comfortably in your bedroom listening to Dmitry Sinkovsky’s violin is simply not recommended.

Overall, I think the set strikes a nice balance between isolation, keeping you aware of your surroundings and providing adequate audio quality.

Speaking of jogging and commuting, I’ve gone running with my dog and braved Mumbai’s local trains with the set in my ears. Never once did I feel like they’d fall out and get lost. The set stubbornly hung to my ears and never once let go. This is commendable. Connectivity with my phone was never an issue and the range was usually good. Sometimes, however, the two earbuds would stop communicating with each other for half a second or so.

While connecting to a phone was easy, connecting to a Windows laptop proved to be a bit frustrating. Sometimes, I could connect to only one earbud and other times to both. Given that this set is meant for “sporty” activities, I don’t imagine that connecting to a PC is something that you’ll do often.

The biggest problem for me was video playback. When streaming video from Netflix and YouTube, the audio was permanently out of sync. As you can imagine, this is incredibly frustrating, and for me at least, a deal-breaker. A two-hour commute with out-of-sync audio is something I simply can’t tolerate.

The issue wasn’t so bad on Netflix, but YouTube videos were unwatchable with the SoundSport Free.

I never had these issues with the Free’s predecessor. Bose has acknowledged this issue, but claim that it’s a limitation of the technology used.

That argument would make sense if the AirPods didn’t exist. But they do, and they’re cheaper, and they don’t suffer from the same issues.

Yet another major source of frustration is the call quality. The mic is only in one ear and audio only comes in on one earbud. Again, Bose passes this off as a limitation of wireless technology, and again, I’d like to point out that Apple fixed the issue a year ago. Battery life is, at least, good. I found that the earbuds lasted me about 4-5 hours on a single charge and that the case could recharge the buds at least twice from zero percent.

More importantly, that nagging worry that I’m running out of charge was gone. The case itself charges fast and I found that I only needed to charge it once or twice a week.

The SoundSport Free had one job, to outdo the SoundSport Wireless by offering a truly wireless experience, and it has, after a fashion. Audio quality has been improved and the charging case is a huge bonus.

If you only listen to music and podcasts while working out or while commuting, Bose has achieved its goal. If you expect anything else, however, Bose has failed.

Overall, the Apple AirPods are a much cheaper, more refined option that also offers a more pleasant audio experience. In terms of design, they’re years ahead of Bose.

There is potential with the Bose SoundSport Free, but I think it’s been wasted.