In a market that's fast getting flooded with new dual-camera smartphones, does the ASUS ZenFone Zoom S stand out? The sudden influx of dual-cameras in the smartphone world can almost single-handedly been attributed to Apple, the iPhone 7 Plus and its Portrait Mode. Today, you’ll be hard pressed to find a new smartphone that doesn’t have a dual camera.

ASUS, no stranger to smartphones, has one of its own to offer the dual-camera world, the ZenFone Zoom S. As far as smartphones go, the Zoom S isn’t unique and in its price range, is facing stiff competition from the likes of the Honor 8 Pro and Moto Z2 Play. So how does it fare in this company? 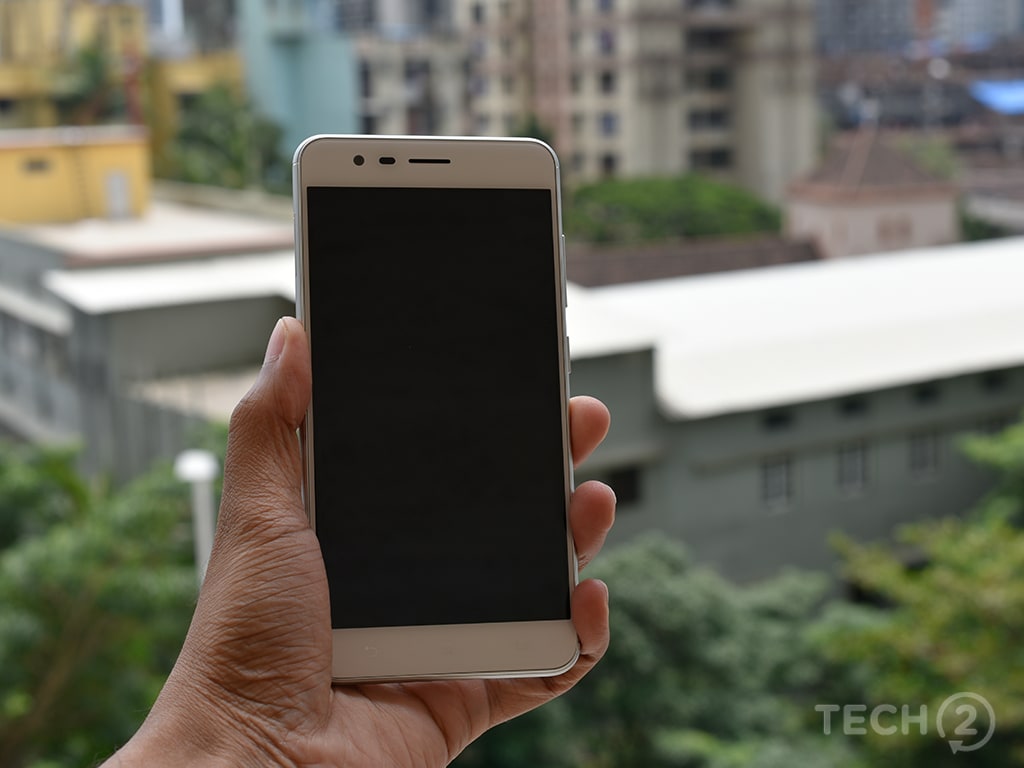 From the front, the ZenFone Zoom S looks like any other Chinese smartphone

As with most smartphones these days, the ZenFone Zoom S looks almost exactly like any other Chinese phone in the market. When it comes to Android phone design, it almost seems like everyone is outsourcing to the same designer.

To describe it, one would say it’s a rectangular slab with glass on the front, metal on the rear and plastic caps on the top and bottom on the rear side. Power and volume buttons are on the right and you get capacitive navigation keys on the chin. And by the way, these capacitive buttons aren’t backlit.

The rear does look a little different, if only because the fingerprint sensor is a rounded square rather than a circle.

The rear camera’s flash and focus unit is a black bar below the main camera housing, so that’s something that stands out at least.

Two, slim strips that appear to be made of metal separate the plastic caps from the metal back. This is where the antennas are housed.

Given the price of the phone, I’m a little disappointed at the use of plastic because we’ve seen cheaper phones that use a unibody metal shell on the rear. If the plastic was completely invisible and colour-matched to the metal, it would have been fine, but the finish is just not that good.

The build is strictly average and the design is generic. Phones in this price bracket, devices like the Honor 8 Pro and the Moto Z2 Play aren’t stunning examples of their kind, but they’re more distinctive and better built. As far as specifications go, the Zoom S packs in some decent hardware. For your money, you get a Qualcomm Snapdragon 625, 4 GB of RAM, 64 GB of internal storage and microSD support up to 2 TB. The screen is a 5.5-inch FHD AMOLED display with Gorilla Glass 5 protection with a 76.5 percent screen-to-body ratio.

The camera, which we’ll cover in more detail in the camera section, is the star of the show. It’s a dual-camera unit with two 12 MP sensors, one with a normal lens and the other with a tele lens.

For connectivity, you get dual-SIM support, both SIMs supporting 4G, but you can only use a single SIM if you’re using a microSD card.

The large 5,000 mAh battery is certainly welcome, and ASUS claims that the device even supports reverse charging, where you can charge another device using the spare capacity on your phone.

Connectivity options include Wi-Fi 802.11 b/g/n and Bluetooth 4.2 support and USB 2.0 over Type-C. USB OTG and fast-charging is supported. Oh, and it also comes with a “5-magnet speaker”.

I’m surprised that ASUS choose not to include Wi-Fi 802.11 ac support, many cheaper phones include support for that faster Wi-Fi standard. One might argue that Wi-Fi ac speeds are unnecessary, but the 5 GHz band that ac supports is not necessary just for speed, but also to cut down congestion in Wi-Fi heavy areas. The lack of Wi-Fi ac support isn’t a deal-breaker, it’s just a feature that would have been nice to have, especially at this price. The display is legible in bright light

The 5.5-inch FHD AMOLED display is quite sharp to look at and pleasant to use. It’s bright enough for use in daylight and responds well enough to various lighting conditions.

The Gorilla Glass 5 protection is nice. Viewing angles are also decent and while there is some colour shift at odd angles, it’s par for the course as far as smartphone displays are concerned. The new ZenUI is relatively clean, which is nice.

Thankfully, the phone is running Android 7.1.1 Nougat with ZenUI 4.0 on top. It’s not a bad combination as far as OSes go, but I do prefer stock Android and I find many of ZenUI’s animations to be superfluous. That said, this iteration of ZenUI is certainly lighter than past variants I’ve seen on the ZenFone 3 series.

There is bloatware, but it can be safely ignored. Animations are faster than they’ve been and the new theming options aren’t bad, if you’re into that sort of thing.

Performance was a mixed bag. The presence of a Snapdragon 625 means that the phone is responsive and frugal at the same time. I did notice some instances of stutter, however, particularly when viewing heavy web pages and when opening the camera app. Most of the time, however, the phone was fast and responsive.

While playing games, the phone would only get mildly warm. Heavier games like Real Racing 3 and Asphalt 8 played quite nicely on the phone.

As far as connectivity and call quality was concerned, I had no complaints.

ASUS very ambitiously describes the audio setup as “ZenFone Zoom S features a 5-Magnet speaker that has SonicMaster and is High-Res Audio certified. With an advanced five-magnet speaker construction, metal voice coil and expansive sound chamber powered by an NXP Smart AMP, you’ll enjoy powerful audio in every scenario.” I think we can safely dismiss that description as marketing hyperbole. The audio output from the speakers was loud, but that’s about it. I’ve heard phones that are louder and phones that are softer and the Zoom S’ speaker isn’t particularly notable. Coming to the output from the 3.5 mm headphone jack, here as well, the audio quality wasn’t as spectacular as ASUS would lead you to believe, but it’s certainly good. In fact, I would go so far as to say that the output from the headphone jack, over a decent pair of headphones is quite nice.

The camera is the reason this phone exists, and for that reason alone, the camera better be mind-blowing for the price. Smartphones with dual-cameras have already been here a while

First, let’s look at the hardware. The rear camera unit consists of two 12 MP sensors, one of which has a lens with an equivalent focal length of 25 mm and an aperture of f/1.7. The sensor is a Sony IMX362 and has a lens with an 82 degree field of view. You also get 4-axis optical image stabilisation (OIS) that ASUS claims is good for four stops. This unit also uses “ASUS SuperPixel Technology”, which apparently improves low-light performance by up to 2.5 times, claims ASUS. This camera uses electronic image stabilisation (EIS) for video recording.

Videos can be recorded at 4K, FHD and HD at 30 fps. Slow motion video recording modes are also supported.

This is unlike the ZenFone Zoom which actually had an interesting zoom mechanic and which offered 3x optical zoom. It also doesn’t seem like the tele lens has OIS.

The front camera uses a 13 MP IMX214 sensor and a lens with an f/2.0 aperture. It supports the expected beautifications and screen flash modes that we’ve seen in previous ASUS devices. The camera software includes a host of manual controls, including some for ISO and exposure adjustment. Zoom levels can be taken up to 12x using digital zoom. Digital zoom is awful anyway, so that feature is one to be avoided. Given that you’re getting a dual-camera on the back, ASUS supports a portrait mode feature to enhance bokeh. To use it, you simply put the camera in portrait mode and adjust the virtual aperture with a slider. On paper, the camera certainly sounds brilliant. The reality is a little harsher. In very low light, the camera can hold its own with the best in its class, there’s no doubt about that. Noise is low and colours are decent. The focus is also extremely fast and quite accurate, even in low-light, which was a pleasant surprise.

Given perfect lighting conditions, the camera can also hold its own with others in its class, but in any other scenario, it’s strictly average.

The main problem with the camera is its limited dynamic range. In shots taken in the early evening, around 4 pm, colours are completely blown out. Bright areas turn white and dark areas black. This gives the images a harsh cast and makes them unpleasant to look at.

There’s also not much detail to be found. Zoom in even slightly, and the image starts to look like a painting.

Portrait mode is great when it works, but depth-perception is suspect and quality goes for a toss in anything but perfect conditions.

The bottom-line is just this, this is a very temperamental camera with good noise control in very low-light, and limited use in other situations. The zoom levels are unexceptional and you’ll find similar levels on any other dual-camera system offering normal+tele lens option. 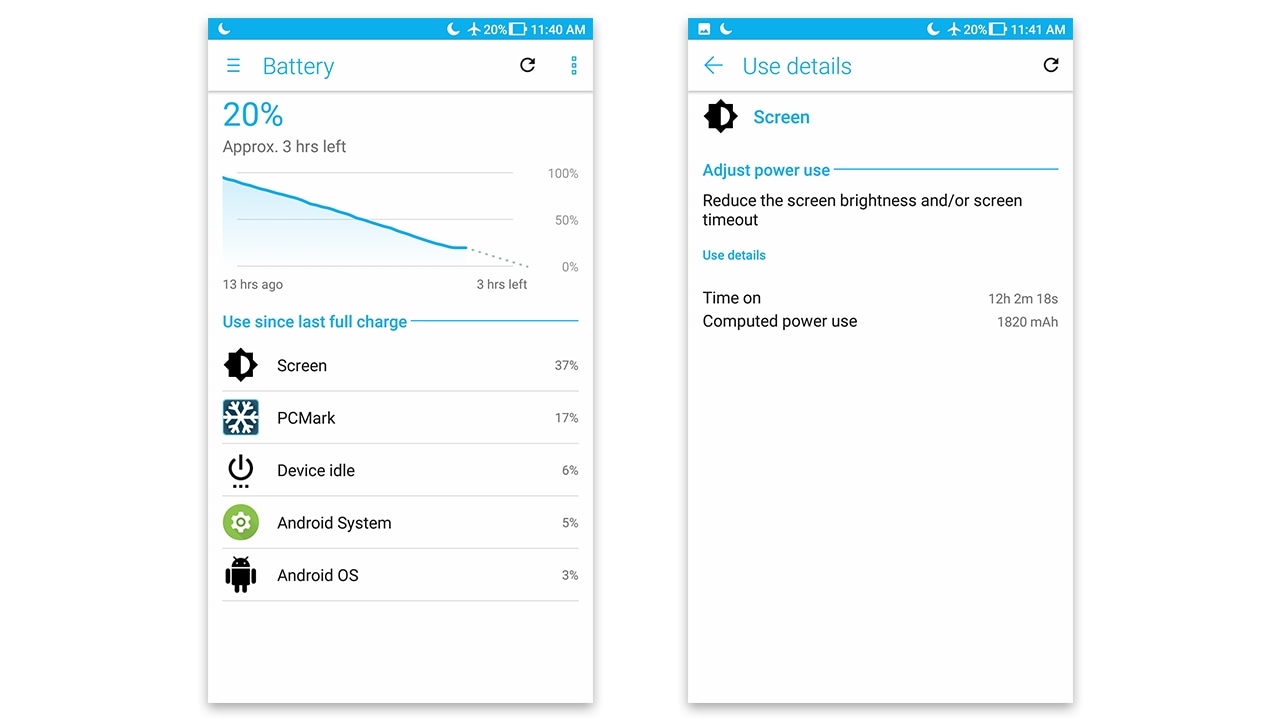 With its 5,000 mAh battery and efficient Snapdragon 625 SoC, the battery life is excellent.

The combination of a 5,000 mAh battery and a Snapdragon 625 means that battery life should be good, and it was. Our standard PCMark battery life test kept on crashing, but we did see 12 hours of screen-on time under intensive use, which is impressive. Better yet, I still had 20 percent battery life to spare.

In daily use, my two-year old iPhone 6s Plus lasts me about 11-12 hours. In contrast, the ZenFone Zoom S has enough charge left over to get me to office the next day without dying. That’s easily over 17 hours of usage for someone who is rather a heavy user. The screen is protected with Gorilla Glass 5

The ZenFone Zoom S isn’t particularly well built and neither does it have a great camera or zoom feature. To top it off, the price is rather high at Rs 27,000, pricing the device just shy of the OnePlus 5. The device’ competition in this price range includes the Honor 8 Pro and the Oppo F3, both of which, I believe, offer a more compelling feature-set and better camera system.

The problem with Zoom S boils down to the fact that it has no USP. The original Zoom was one of the first smartphone cameras in the world to offer an optical zoom option. In the case of the Zoom S, it's entering a market where every manufacturer offers some form of dual-camera with optical zoom already.

For Rs 1,000 more, the Moto Z2 Play again offers much better build quality, a slightly faster processor, near stock Android, a faster USB 3.1 Type C port, splash resistance and support for a whole slew of Moto Mods. The latter aren't very useful yet, but they're certainly more of a USP than the Zoom S' "zoom" camera.

The Oppo F3 is about 75 percent of the price, features a similar build quality, similar internals and a less interesting 16 MP f/2.0 camera.

At this price, the Honor 8 Pro and Moto Z2 Play are better options, and honestly, if you’re prepared to spend Rs 27,000 on this phone, just save up a little longer and grab the OnePlus 5.