This isn’t an exciting laptop, but it’s a sensibly configured one that's powerful enough for most. The VivoBook S14 isn't much of a looker and it could do with better speakers, but it's still a great deal for the casual user.

When buying a laptop for everyday use, and you don’t have money to burn on something like a Surface Laptop or a MacBook, you need something that will get out of your way. You need a laptop that’s simple and powerful enough for your needs, something that requires a minimum of maintenance. The ASUS VivoBook S14 S430U almost achieves that ideal.

There’s really not much to say about the design of the VivoBook S14. It looks like any other ASUS laptop and nothing stands out as such. The body is mostly plastic, but the lid has a brushed metal panel and the palm rest a plain metal one. The VivoBook S14's hinge raises the base, which helps improve airflow. Image: tech2

The lid of the laptop extends a little bit beyond the base, which raises the base when the laptop is open. It’s an interesting design because now, the base gets better air flow and your thighs don’t get roasted.

Ports are present on either side and hot air is exhausted out the back of the unit. Bottom firing speakers can be found on either side. It’s nice that the bezels are thin and thankfully, the webcam is exactly where it’s supposed to be, which is at the top of the display. The charger is surprisingly small, about the size of a large phone charger, but uses a proprietary port for charging. I would have loved to see a USB-C charging option instead.

It’s not a bad looking device, but I do think the rounded, silvery keys on the keyboard make the device look a little bit tacky. If anything, the previous VivoBook S14 featured a more mature design.

One thing I do like is how sturdy the device feels.

I don’t know what it is about the keyboard design that makes it look cheap, maybe it's that silvery finish, but I think it single-handedly ruins the device’s aesthetics.

I don't like the aesthetics of the keyboard, but it is functionally sound. Image: tech2

The typing experience is, however, extremely good. The keys are well-separated from each other and respond promptly to a keypress. After getting used to the keys, I could easily match my regular typing speed of around 70 wpm, and without any typos or missed taps at that.

The trackpad is also fast and responsive and can handle Windows’ multitasking gestures with aplomb.

I did find the default sensitivity to be a tad too high though, but that can easily be tweaked in the settings.

The laptop is reasonably well endowed in the specs department. It’s powered by an Intel Core i5-8250U CPU, has 8 GB RAM and offers a 256 GB SSD paired with a 1 TB HDD. The display is a 14-inch FHD unit. 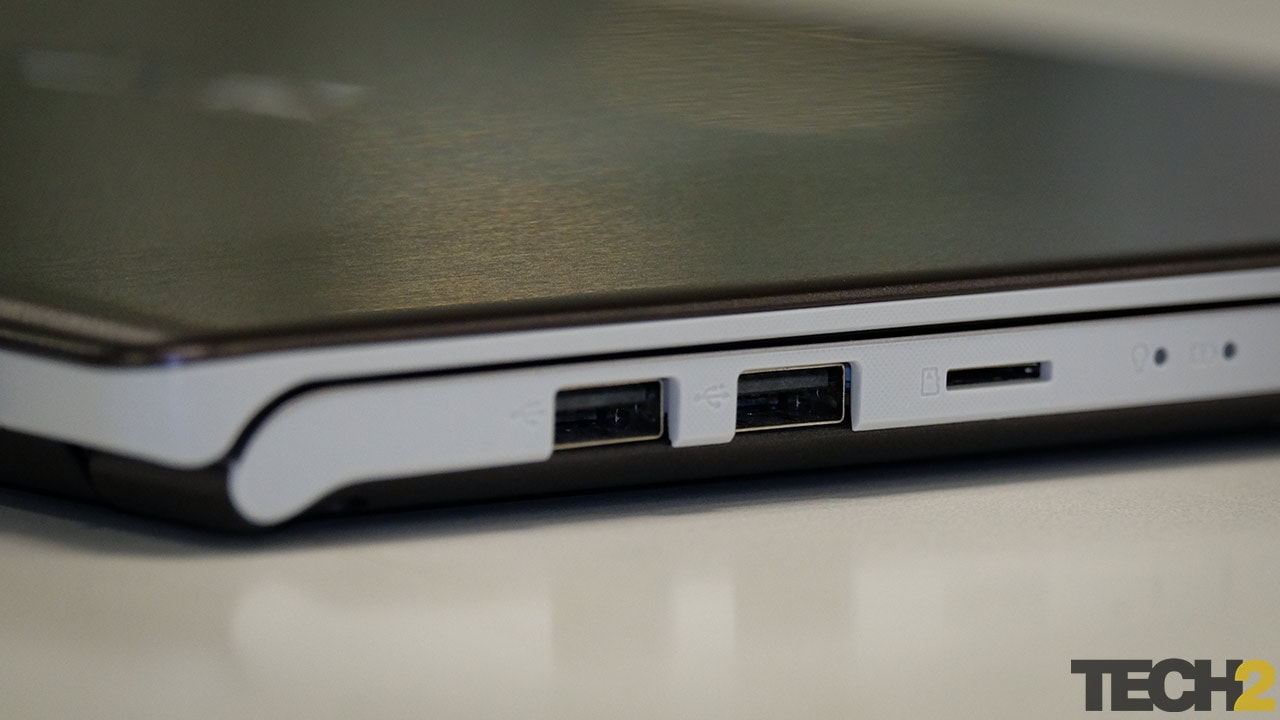 The device has enough USB ports to keep anyone happy. Image: tech2

There is no touchscreen display to be found here, but at this price, you can’t expect to find one anyway.

I love the decision to go with an SSD+HDD combo and I wish more manufacturers would do the same. An SSD for the OS and core apps means that the user experience will be lag-free. The HDD can store all that data you generate.

The I/O is also very generous and 3x USB ports are far more than you get on most laptops these days. It is disappointing that the laptop doesn’t support Thunderbolt 3, though, which is a game-changing port. I also can’t understand why ASUS opted to offer a microSD card slot of all things.

A fingerprint reader is embedded within the TouchPad.

The 14-inch FHD (1920x1080 pixel) display on the VivoBook isn’t bad, but it could have been a lot better. My testing puts its colour gamut at a mere 57 percent sRGB (100 percent is expected and MacBooks manage over 130 percent). Thankfully, the colours are at least accurate.

The display is perfectly average for this price bracket. Colours and pixel density are enough for regular use. Image: tech2

For work and for movies, the display is great. It is a little dull and so not recommended for use outside, but you’re hardly likely to take out the laptop while in the bright sun anyway.

As long as you’re not thinking of making critical colour corrections on this screen, you won’t have any complaints.

For everyday use, I really couldn’t ask for more. The 8th gen CPU is powerful enough to handle anything you throw at it and the SSD ensures that everything works buttery smooth.

There’s no graphics card to be found so gaming is completely out of the question. I tried Fortnite and the machine barely managed 20 fps at the lowest settings, and a stutter 20 fps at that. PUBG fared even worse. If you’re looking to play 2D platformers and the like, you’ll be fine. For even moderate gaming, simply avoid this device.

The laptop doesn’t tend to get very hot either. Even under full load, the CPU never crossed 72°C, which is commendable. Clearly, the thermal management is good and is made evident in our video conversion test, where the laptop managed a very respectable score compared to its competition.

My only complaint is with the performance of the speakers: they’re really quiet. So quiet that you won’t hear them if a ceiling fan is on. On the S14, I spent more time reading subtitles on Netflix than actually listening to audio.

Audio issues aside, battery life is also a bit of a problem on the VivoBook. It’s good, but it’s not good enough. For my daily use, which involves Word, constant browsing and some minor editing work in Photoshop, this laptop lasts about 4 hrs.

The laptop is powerful enough for most use-cases. Image: tech2

Our heavier PCMark 8 Battery Life test threw up a disappointing estimate of 2 hrs 27 minutes. This is far short of the 3+ hrs that most other laptops hit in the same test.

The ASUS VivoBook S14 S430 isn’t an exciting laptop, but it’s a sensibly configured one that is powerful enough for most people. If the speakers and battery life had been better, I’d have blindly recommended it to anyone looking for a laptop in the Rs 60,000 range.

As it stands, I’m torn between recommending the S14 and the Lenovo IdeaPad 330S. They’re both similarly priced, have similarly disappointing speakers and nearly identical displays. The 330S has an edge in battery life (managing about 6 hrs) and the S14 offers the better user experience, and choosing between these factors is something only you can do.