Despite the always-on display, the Series 5 doesn't give veteran users much of a reason to upgrade When it comes to the smartwatch category, there is only one name that matters: the Apple Watch. Since Apple Watch Series 2, Apple has consistently been delivering the best smartwatch experience on any platform. Rivals powered by WearOS and Tizen OS significantly outnumber the Apple Watch, but the user experience is quite clunky. Due to this, the Apple Watch has never left the no.1 spot in terms of smartwatch sales and revenue.

The only standout feature of Series 5 over Series 4 is the always-on Watch display. Apart from that, it’s difficult to tell the two watch models apart at a glance.

It was a fairly easy conclusion with this Watch. If you have the Watch Series 4, hold on to it. The always-on display does improve the overall user experience, but it doesn’t add significantly more over the Series 4. In my usage, it also took a hit on battery life. The fact that Apple has discontinued the Apple Watch Series 4 and only kept the Series 3 on sale further adds gravitas to the fact that keeping Series 4 on sale would’ve cannibalised the Series 5. A word to the wise, you can still find the Apple Watch Series 4 available online at a lower price.

As I said, the always-on display is the only visually different feature on the Apple Watch Series 5. The always-on aspect of the display has been nicely executed, whereby it shows only the most basic information needed and fades the other bits of the complication. For instance, if you have a complication which has a white colour, it will appear dark; if you are doing a workout, the second counter will not be seen when the watch is not facing you; if you are in an app, you will just see a time overlay over a foggy layer covering the app. Apple uses a variable refresh rate for the Watch display, which is a first. Most display panels refresh at 60 Hz or 60 time a second. Apple's tech — the LPTO display — allows the panel to refresh as slowly as once a second or 1 Hz.

So it can be 60 Hz in cases when you are actively using the Watch and interacting with watchOS, and 1 Hz when idle.

This is made possible because of the use of a Low-Temperature Polycrystalline Oxide (LTPO) OLED display. You can head to the Settings menu and disable the always-on mode if you so wish. The option to block sensitive complications — those that may show your heart data or calendar or so on — is present, which is a nice touch. Now while Series 4 also had an LTPO OLED display as well, there was no provision for the use of variable refresh rate tech. 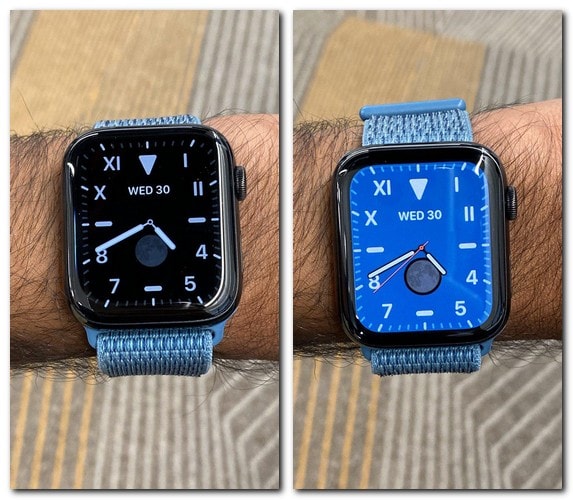 The Apple Watch Series 5 has an always-on display which becomes dark when you are not actively engaging with the Watch (L) . It lights up when you twist your wrist to face your eyes (R). Image: tech2

In terms of specifications, the 44 mm display sports a 368 x 448-pixel resolution which offers excellent sharpness. Thanks to the use of an OLED display, you get great contrast and deep blacks. Apple claims that the brightness on the Watch Series 5 can go up to 1,000 nits. While I didn’t have the instruments to verify this claim, I never felt the display was too dim, even in bright ambient lighting.

Build and Design are identical to the Apple Watch Series 4 You get the Apple Watch Series 5 in the same 40 mm and 44 mm form factors, with GPS and GPS+Cellular variants, as the Series 4. The Watch I am testing is the 44 mm GPS+Cellular variant with a steel frame. Speaking of which, you get additional options for materials.

At 48 g, it isn’t too heavy on the wrist. It is 10.7 mm thick, which is around a millimetre thinner than the Series 3. The display stretches all the way to the edges and the bezels are much thinner than those seen on the Series 3 Cellular or older watches. The larger screen is also great because you’re now presented with far more information at a glance.

You do get the Apple Watch Series 5 in a ceramic white material in addition to aluminium and stainless steel form factors. There's also a titanium model. As with the Watch Series 4, you get the second-generation optical heart rate sensor and the electric heart sensor for the ECG app (which now works in India too) on the underside of the Watch. The Digital Crown has the same kind of haptic feedback we had seen with the Series 4.

As has been the case with most Apple Watches, the Series 5 is also built like a tank. With IP68 water and dust resistance, you can use the Apple Watch Series 5 in the pool, while running in the rain, while taking a dip in a river or the sea, and so on.

The Apple Watch Series 5 Cellular comes with an Apple S5 chip powering the watch. The storage capacity has been boosted to 32 GB now, which enables you to store more watchOS apps as well as more music.

Things are smooth on the Watch Series 5 and I faced no issue with the overall user experience. One issue that cropped up more than once was when I used to get a notification (when I would raise my wrist to read it), I would only see the dimmed always-on display. I had to tap on the watch to turn it on and then swipe from top to bottom to read the notification. watchOS 6 is generally responsive on most occasions but it does throw up such bugs every once in a while.

ECG feature has now been activated to Indian users as well. Image: tech2

On a few instances, while listening to a podcast or music on my AirPods, I would notice that the Bluetooth connection was disconnected. A lot of the issues are software bugs which should be fixable in future updates.

In terms of new apps, we now have a Compass app which can be added on as a complication and can also be used with Apple Maps navigation. Third-party app makers can integrate the Compass function in their apps. The other new app which can also be used as a complication is the Noise app. The colour coding alerts you of high noise areas. PSA, Mumbai traffic noise hovers between 80 dB and 90 dB.

One great thing with watchOS 6 is a dedicated app store for Watch apps, which you can now download either directly or via your phone. Among the new Watch faces, you have the Meridian, California, Modular Compact, Solar Dial (a personal favourite), Gradient, and Number faces. Apple has also added a Cycle Tracking feature for monitoring menstrual cycles. This data syncs with the Health app on the iPhone. Voice memos can be recorded on the Watch directly — this is a lovely feature and I found myself using it a lot to make quick voice notes. The Calculator app has also been added to watchOS 6, along with tip calculator, which is a pretty handy feature to have. The ability to record workouts and prompt you about them is present in the Series 5 as well. It was quite helpful in tracking many rigorous walks. The Health data recorded when on an outdoor run is pretty much the same as that on watchOS 5 on Series 4, but you now have additions in terms of cadence, elevation (Max, Min indicators). Thanks to the Cellular connectivity, I had no issues streaming music while on a run. Of course, that takes a hit on the battery, but gives you the convenience of not carrying a phone. Or else, you can listen to the music stored on the Watch, which can be synced from your iPhone. Even with workouts such as outdoor swimming, it was quite precise with the measurements. For workout enthusiasts, the Watch offers the best option among smartwatches, if you are not users of Garmin’s high tech watches. One feature I would have loved to see on Apple Watch Series 5 for the Running workouts was wrist-based heart-rate training, which is commonly seen on Garmin watches. It is not the most accurate but gets the work done if you don’t have a chest-mounted heart rate monitor around.

Features like placing a call, responding to messages on the Watch itself, work as they did in Series 4 and I didn't notice any drastic improvement here. The onboard microphone and speakers are good enough to take calls while at work or at home, but it's useless outside in Mumbai traffic.

Apple Watch Series 5 comes with the always-on display option. Despite Apple's claims that the feature doesn't impact battery life, my experience tells me otherwise. With the always-on display enabled and selecting the Solar Dial complication (which looks gorgeous and has some neat graphical elements around sunset and sunrise) I realised that with a 100 percent charge before leaving for work, I would reach the 35-40 percent battery before going to bed. When I wake up the next day, the battery would be at 22-25 percent. This was with just regular usage. I don’t know if this is due to watchOS 6 bugs, but seeing a drop of 10 percent battery overnight was something I had never seen on the Watch Series 4. A quick search online does mention that watchOS 6 bugs are having a negative effect on battery life.

Workout mode on the Apple Watch works as seamlessly as ever. A 5k run extracts around 10 pc of the battery life. Image: tech2

A run of around 6-7 km will use up around 10 percent of the battery. So on days when I ran a 10k after a regular workday, I would have to charge the Watch overnight on the same day. This never happened with the Series 4 Watch, which would give me a proper two-day battery life on regular usage.

The Apple Watch Series 5 doesn’t look like a major upgrade from last year, and if you have the Watch Series 4, you have no valid reason to upgrade. While features like the always-on display, Compass app and Noise app are great, battery life takes a significant hit. The latter could be down to myriad unaddressed WatchOS bugs, but until they're fixed, there's even less incentive to upgrade.

I'll keep an eye on battery life over the next few weeks to check if subsequent WatchOS updates fix the battery drain issue.

If always-on display is a critical feature for you, get the Series 5.

With the Watch Series 4 getting a price drop and the ability to be able to get a Series 4 Cellular for around the same price as the Series 5 GPS-only Watch, I feel it makes the Series 4 an even more compelling option. Even if you are on Series 3 or older Apple Watches and are looking to upgrade, so long as you are getting an Apple warranty on purchase of the Watch Series 4, I’d suggest you go for it over the Series 5.