The advantage with the Echo Dot is that you can pair it with an external speaker if you so wish. Smart speakers have been around for a couple of generations now. India saw the launch of the Amazon Echo lineup last year followed by Google bringing its Home line to India in April this year. As a category, smart speakers are still to find a foothold as most of our experiences with the devices have only been limited to simple tasks. While the idea of a smart speaker is exciting, they're rarely practical.

With the third generation of Echo products, Amazon has gone in for a design upgrade on all its products. If you were on the fence about smart speakers, the Echo Dot (3rd gen) is a good place to start. The improved build quality and louder speaker makes it a much better option to consider over the earlier generation Dot. But be prepared for a mild learning curve with the Echo Dot as Alexa skills keep evolving and Amazon keeps adding new features to the AI backbone of the Echo line.

With that out of the way, let’s begin our review. 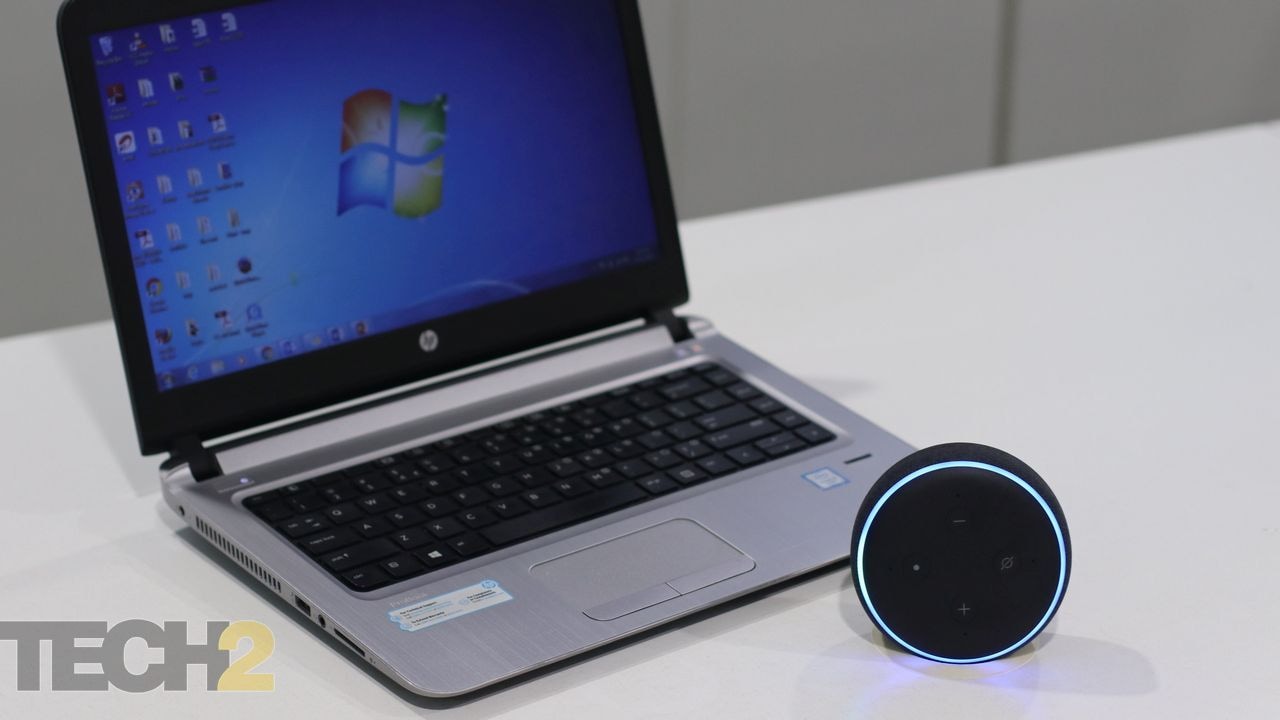 The one thing that looks like a definite nod to Google’s line of smart speakers such as Home and Home Mini is the use of textured cloth in the design. The first two generation Dots were all plastic, although a lot more compact. But thanks to the improvement in speaker quality, you wouldn’t mind the extra bulk on the new Dot. It weighs in at 300 g and is 43 mm thick. The design elements that mark an Echo device apart from other speakers are still present, elements such as the glowing LED light ring and four buttons which a good amount of tactility. This time around, you'll find four far-field microphones. The base of the Echo Dot has a rubber finish which ensures that the Dot stays fixed in one spot and isn’t prone to slipping. On the back, you have a power in port and an audio out. It would’ve been nice to have a micro USB or a USB Type C port instead of a proprietary port which takes in a 15 W adapter.

The Amazon Echo Dot comes with pretty much the same features that were seen in its earlier incarnations. You still get a hockey puck-shaped circular device, but the new, 1.6-inch speaker inside is now firing in 360 degrees. The four buttons on top include volume up/down, mute and action button and there are four far-field microphones. These microphones are designed to pick up your voice through any kind of noise or clutter, and from greater range.

There’s support for dual-band Wi-Fi which needs to be connected via the Alexa app on your mobile device. Setting up the Dot is quite straightforward so long as you have a Wi-Fi hotspot. There’s an option to connect a dedicated speaker to the Echo Dot using the audio out port on the rear side. You can also connect your Bluetooth speaker to the Dot to stream music on it instead, thanks to A2DP support. While there’s no smart home hub as it’s present on the Echo Plus, you can configure the Dot to control smart lights provided they’re connected to a compatible hub. It also features the Alexa calling feature called Drop-in.

Nothing much has changed on the performance front. The current gen Dot is all about the improved design and enhanced speaker quality. It is certainly a huge jump from the speaker on the previous gen Dot, which wasn’t too loud and was only marginally better than a smartphone speaker, which isn’t saying much. With the current gen Dot, the sound quality has certainly seen an improvement. There’s a lot more bass and music sounds much richer. Thanks to four far-field microphones as opposed to just one in the previous gen Dot, the current gen Dot is able to decipher your voice commands even when there is music playing. Because of the rounded speaker design, the sound will reflect off surfaces, especially if you keep the Dot in the corner of a room.

The Alexa Skills have certainly seen some upgrades and it’s an on-going endeavour from Amazon. But it’s quite a task to keep up with the new skills and Amazon has to find a way to make learning new skills more user-friendly.

Some fundamental issues still remain. Chief among them being the way news briefings are read out. I had elaborated on this in my Echo Spot review, and nothing much has changed. In fact, there was a recent Reuters study exploring the future of voice and its implication for news which noted, “Despite the rapid growth and strong promotion of voice technology, news consumption on these devices is currently lower than might be expected, with most usage focusing on very short news briefings. Many users are unaware of the wider range of options around news.” It's still difficult to get news the way you want it. For instance, I just cannot ask Alexa to give me only the tech news briefing and bypass all the other genres of news. With the briefing, it's almost as though you are forced to listen to everything that your selected news service has to offer. I can't even skip news sections once the briefing starts. Clearly, a lot needs to be done here. Amazon Echo Dot (3rd gen) has a power port and an audio out on the rear side. Image: tech2/Sachin Gokhale

In terms of other features, such as listening to music, getting weather updates and tracking the progress of your favourite football team, among other things, the Dot performs well. In fact, it’s great for quick QnA type sessions rather than long, drawn out, contextual conversations. Also, for things such as shopping or booking an Uber, I realised it was much better and faster to do it on your smartphone. This is definitely not an area of expertise for smart speakers yet. It’s definitely not as simple as they show it in the various advertisements either.

One feature I do like is the Kindle integration, where the Dot reads out a book from my last-read position. With Bluetooth support, I can pair the Dot with my earphones and have an audiobook experience if I am feeling too tired to read a book on the Kindle. And now with Audible available in India, you can use Alexa to listen to your Audible audiobooks as well.

Recently, the new Fire Stick was announced with support for Alexa as well. While it’s great to use it to ask the Fire Stick to play your favourite shows, the voice control isn’t the best if you are searching for non-English content. I would still stick to using the remote control to play the show I want to play rather than getting frustrated because Alexa can’t understand the names of certain TV shows or movies.

Thanks to Echo Dot’s compact size, there have been some innovative ways in which it can be used. Such as this user who uses the Echo Dot paired with a wireless hotspot to stream songs in his car. Or these teachers using Alexa in a classroom.

The competition to the Echo Dot is the Google Home Mini. While there was no comparison in the sound quality of the second gen Dot and Home Mini — with the Mini offering the better speaker experience, with the third-gen Dot, things have certainly improved for Amazon. But when it comes to contextual speech and longer conversations, Google Home Mini still has a huge advantage over the Echo Dot. For instance, if I ask the Echo, “Hey Alexa, which is the top team in La Liga?” I get the right answer, but if I follow up this question with, “Hey Alexa, who is the captain of that team?” Alexa gets confused as it has not retained the context of the conversation — the top La Liga team and its captain. This is something that would work flawlessly on a Home Mini, for instance. The verdict is quite simple: If you’ve never bought a smart speaker before and are curious as to what’s on offer, the Amazon Echo Dot is the right entry point in this segment. At Rs 4,499 it’s not priced too badly either. Be prepared for a learning curve though.

If you had an Echo Dot from the earlier generation, don’t bother with this. Get a powerful Bluetooth speaker instead and pair the Dot with it for better sound.

If you’re confused between the Echo Dot and Google Home Mini, the buying decision will completely depend on which system you’re heavily invested in. If your use case will depend more on search-related queries, then the Home Mini makes a lot more sense than the Dot. For everything else, both are equally good. The advantage with Dot is that you can pair it with an external speaker if you so wish, something you can't do with the Home Mini.