The Alienware Area-51m is a partially future-proof gaming desktop replacement that doesn't compromise on performance.

The Alienware Area-51m will outperform most of the gaming laptops owing to its desktop-grade components, but it comes at a steep price.

When you’re looking for a laptop, portability is probably one of the priorities that you consider before making a buying decision. Otherwise, why wouldn’t you just invest the same amount of money and build a more powerful desktop PC?

Laptops don't have much by way of thermal headroom and due to this, tend to perform lower than a similarly specced desktop. But if you're a gamer who wants no-holds-barred gaming performance, where do you go? Well, you could opt for something like the Alienware Area-51m gaming laptop. 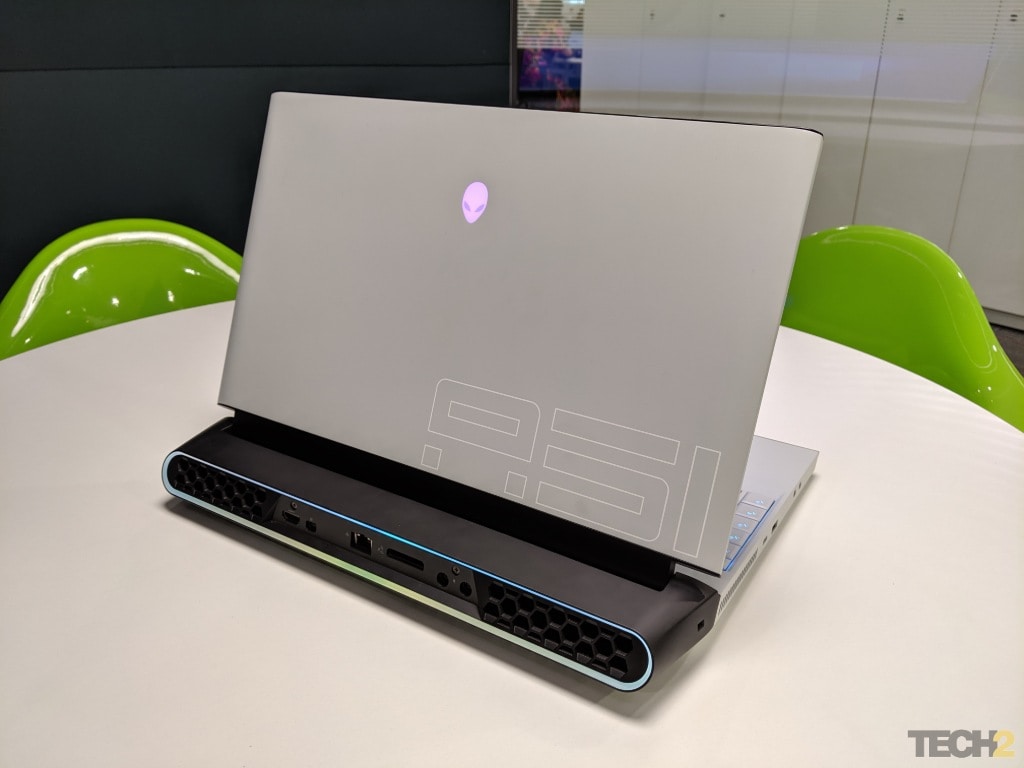 The Area-51m packs a desktop-class CPU and proprietary GPU layout called the Dell Graphics Form Factor or DGFF. Our review unit came with an Intel Core i9-9900K and Nvidia GeForce RTX 2080. There’s also a variant that comes with the i7-9700K and RTX 2070 in India. It packs 32 GB of RAM and 512 GB of PCIe NVMe SSD. The 17.3-inch full HD display has an IPS panel with a refresh rate of 144 Hz and there's support for Tobii eye-tracking as well.

All these components make it incredibly difficult to design a slim and portable laptop chassis. The Area-51m has a chunky body and carrying it every day would make up for a daily workout. While the thick body accommodates all the components and ports, it also ensures that there’s enough space for the cooling system. Installing desktop-class components inside a laptop chassis, especially an unlocked CPU, already sounds like a thermal nightmare. Hence, the cooling system plays an important role in delivering optimal performance without thermally throttling the system at normal working temperatures. 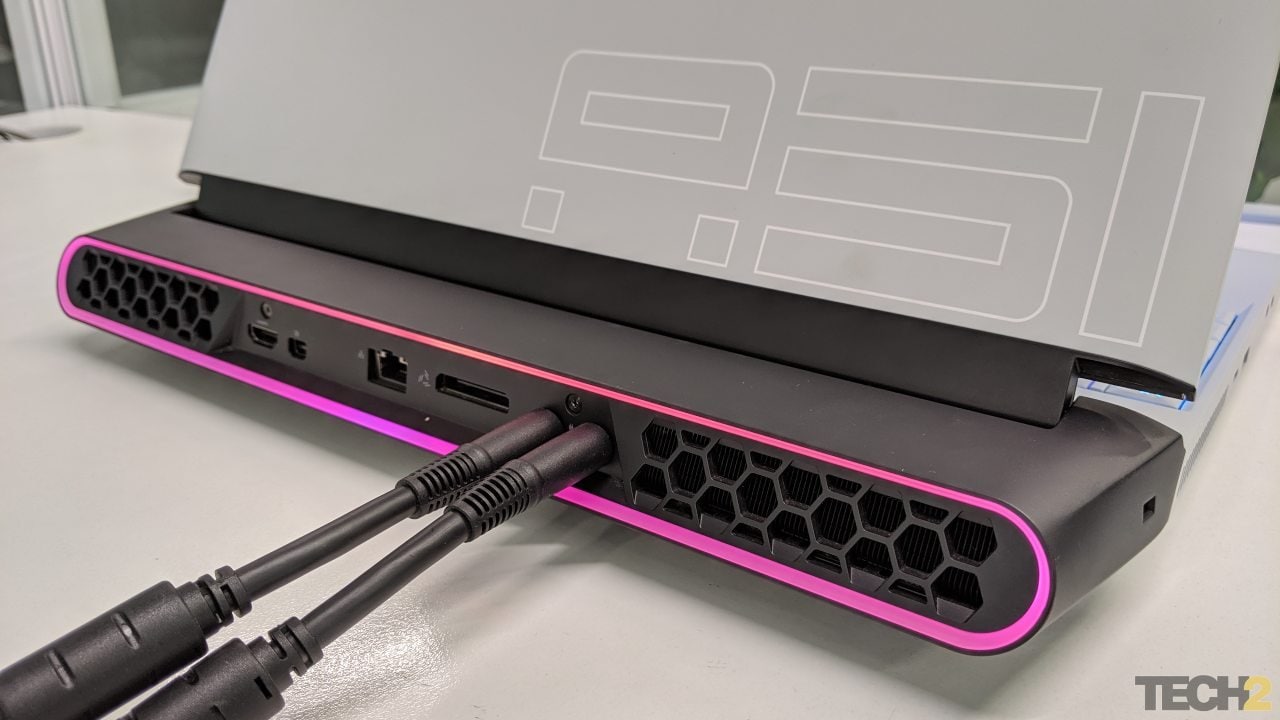 As expected, I didn’t come across any form of bottlenecking or issues with the Area-51m. Multiplayer games such as Apex Legends, Counter Strike: Global Offensive, Fortnite and PUBG had no problems at all. The laptop was able to take advantage of the high refresh rate display to render super-smooth visuals in the games in full graphics settings. Turning it up to demanding games such as Battlefield V, Metro Exodus, and Shadow of the Tomb Raider, the laptop was able to hit up to 80 fps, while Metro Exodus stayed somewhere around 50-60 fps mark. This was with RTX turned on in full HD, and the laptop did get incredibly hot.

Speaking of heat, there are air intake vents on the bottom of the laptop and the hot air comes out from the bottom edge on the back. Air vents on the bottom of the Area-51m. Image: tech/Abhijit Dey.

Battery life on gaming laptops isn’t really the best and it’s the same with this laptop. In the PCMark 8 Creative Battery Life test, it generated an estimated battery life of around 90 minutes. However, if you’re playing games, this will be much lower. And there are the two massive power bricks that you have to carry to charge the device.

While the laptop didn’t disappoint in performance at all, I wasn't impressed with the keyboard. The laptop goes all out with the specifications without any compromises but still packs a regular (albeit customisable) membrane keyboard. Low-profile mechanical keyboards have been there for a couple of years now and it feels like Dell missed out on this. However, we can expect the next version of Area 51, or whatever they decide to call it, to not hold back on any aspect. 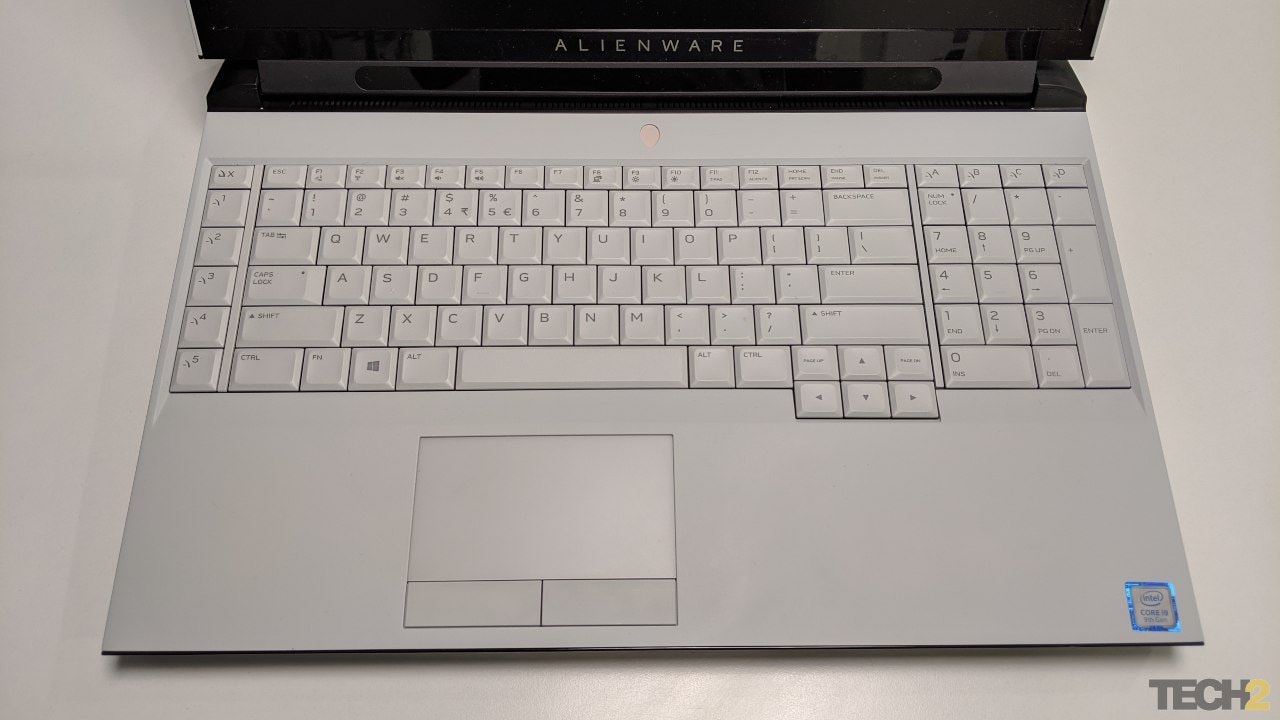 The keyboard on the Area-51m is not as fancy as the rest of the design. Image: tech/Abhijit Dey.

The display was big enough for some immersive gaming and watching movies. While the colours were accurate enough even at wide viewing angles, the blacks weren't as impressive. There was also some amount of backlit bleeding from the edges, however, they weren't drastic enough to impact your experience while playing games.

You are better off using your headphones or external speakers for audio.

A future-proof laptop but with uncertainty

Now, this is something you don’t frequently see in laptops. While you can upgrade your laptop by replacing components like RAM and storage, you’re permanently stuck with the CPU and GPU. However, Dell actually wants its users to be able to easily upgrade the hardware on this laptop, and that too, on their own. The components on the Area-51m can be easily removed right down to the individual components. Image: tech/Abhijit Dey.

Not all laptops have the most pleasant experience of taking them apart, but the Area-51m gives me one of the most satisfying experiences of dismantling a laptop to its individual components. After removing the back panel, you’ll be able to see how Dell has appropriately labelled all the parts and screws to make it extremely convenient for users to remove them individually. The company has even gone to the extent of adding labels for the order in which the screws have to be removed. All the internal components in the Area-51m. Image: tech/Abhijit Dey.

Although upgradeability is flexible on the laptop, you’re probably going to upgrade the CPU and GPU after four or five years, and this is where things become uncertain. By the time you decide on an upgrade, both the components would have already gone through multiple iterations of design. Hence, there’s no guarantee whether the Area-51m motherboard will be compatible with newer-generation hardware. Unless you’re the kind who upgrades with every generation, you might be lucky. While the CPU is completely dependent on the compatibility of the chipset, Dell said that they will try to work with Nvidia to make the future generation of the DGFF cards compatible with the laptop. Every component and screw has been appropriately labelled for easy removal. Image: tech/Abhijit Dey.

However, the introduction of easy upgradeability is a great step. If Dell decides to continue it and other laptop manufacturers try to implement the same, it can only get better in the next iterations. In the same league, the MSI GT76 Titan also exists with similar specs and a similar price tag. However, it lacks the upgradability features that Dell has implemented.

Verdict: When performance is all you seek

The Dell Alienware Area-51m is a replacement to a desktop gaming PC. It isn’t meant to be a portable machine that you can take along everywhere, it's a laptop with the grunt of a desktop, and in that regard, it delivers.

The design is nice and performance is on point, throw in the upgradeability features and you're left with a very appealing package, especially when compared to the competition in this price range. If you can afford one, I'd say it's definitely worth buying.