1More iBFree review: A perfect companion on your run but don't have higher expectations

Its single driver in-ear headphone had us impressed and so did the triple driver in-ears. This time around we got the Bluetooth earphones, the 1More iBFree. So let’s see how they perform. We are seeing a lot of 1More earphones in our test centre these days. Its single driver in-ear headphone had us impressed and so did the triple driver in-ears. This time around we got the Bluetooth earphones, the 1More iBFree. So let’s see how they perform. 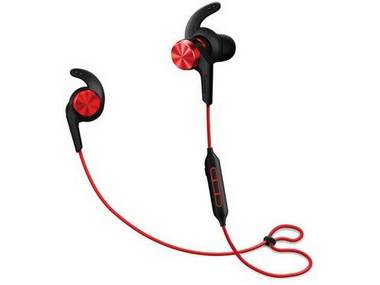 Build and Design: 7/10
1More iBFree earphone is nothing much to look at. It comes with a standard design with a neckband style form-factor with shiny metal finish housing the driver. This is pretty much the distinguishing factor with the iBFree earphones, and you get to choose between red, green, blue and space gray colours. The colour of the wire matches with that of the metal back, which is thoughtful.

The box comes with three sets of silicone ear tips and sports grips or fins in the small, medium and large sizes. I realised the default ear tip it came with was too small for my ear size and I quickly replaced it with a more fitting ear tip. This is good as I did not have to go around searching for the right ear tip size. The hook-like fin hangs on to the fold of the ear to ensure that the earphones don’t come off during intense workouts. It comes with IPX4 rating which ensures that it is water, sweat and dust resistant. Both the ear tips and the fins are replaceable. The fins have indicators for left and right ears and you do see the 1More branding along the base of the driver. You can wear the wire behind your neck or in front, I preferred the latter as I realised that the with the wire behind my neck the grip would loosen after a point and the slack was annoying. I liked the rubberised finish on the cable and the fact that it never tangled. You also get a cable cinch which is adjustable along the length to adjust the slack. The controller is simple with a three-button layout. There is an LED on the top and on the side, you have the micro USB charging port. The iBFree takes around two hours to charge completely. The central button is the power/standby/call receive and decline. This also helps with pairing the headphones to your phone or tablet. The volume up and down buttons also help with skipping songs, although I could not do that on the iPhone.

Performance: 7/10
Let’s get one thing out of the way. This is not an earphone meant for the audiophiles.

I used the earphones mainly while on a run or when I was commuting. For every other need, I had my AudioTechnica headphones. The thing I really loved about the iBFree is the isolation it provided. Once the ear tips and fins are perfectly aligned, it provides just enough isolation to ensure that you are still aware of the background traffic noise, in a way that it is not overwhelming the current music that is playing.

When listening to podcasts, I had absolutely no complaints. The vocals were crisp and even when listening to it in the noisy Mumbai locals I had no issues with the audio volume.

The music that I heard most with the iBFree was my workout music which comprises of multiple Eminem playlists, some fast AR Rahman numbers, a bit of Dido and Porcupine Tree. The earphones performed well for most of these songs and were most responsive in the mids. While listening to some Porcupine Tree tracks such as Buying New Soul and Arriving Somewhere but not here, the lower frequency sections sounded quite flat and there wasn’t any nuance in the rendition. The same was true of a lot of Pink Floyd songs as well, where the lower frequency sounds were just not audible. Different colours that the 1More iBFree Sport is available in. Image: 1More

But if you are running, you aren’t really paying attention to the finer nuances, but just want your favourite music playing the in the background. The bass effect when listening to Eminem’s raps wasn’t that pronounced either. So if you are into fast Bollywood music and want the bass thump in the song to shake you up, the iBFree is not the earphone for you.

Vocal-heavy tracks, such as Dido's albums sounded lovely and I was quite pleased with the overall output there. Every once in a while, I would listen to old Kishore Kumar songs and I did not feel like the iBFree was lacking anywhere, but this is not an earphone on which I would listen to Hindustani Classical music or a classical orchestra, the sound separation while there isn't that impressive.

Call quality was good on the 1More iBFree. The person on the other end had no qualms hearing me clearly. I noticed that at times, even though my beard was blocking the mic area, the voice did carry through without any hitch.

The 1More iBFree earphone took around two hours to charge completely and it gave a good 7-8 hours of listening time. The standby time was strictly alright as I realised that if I did not use the earphone after a couple of days, the charge would drop dramatically. But thanks to a decent charge rate, I wouldn’t complain much about it.

The iMore iBFree is a great earphone if your main requirement is a musical companion on your run. I loved the stability it provided with its fitting, and not once did it slip out of my ears during my runs. Thanks to the light weight, never once did it weigh down on my ear cartilage and introduced any kind of fatigue, something I have noticed with a lot of earphones. At a street price of Rs 3,149 it is definitely worth considering.