The Honor View 20 is the second smartphone to be announced globally after the Samsung Galaxy A8s to feature a punch-hole camera and is expected to launch on 29 January in India. Image: tech2/Omkar Patne 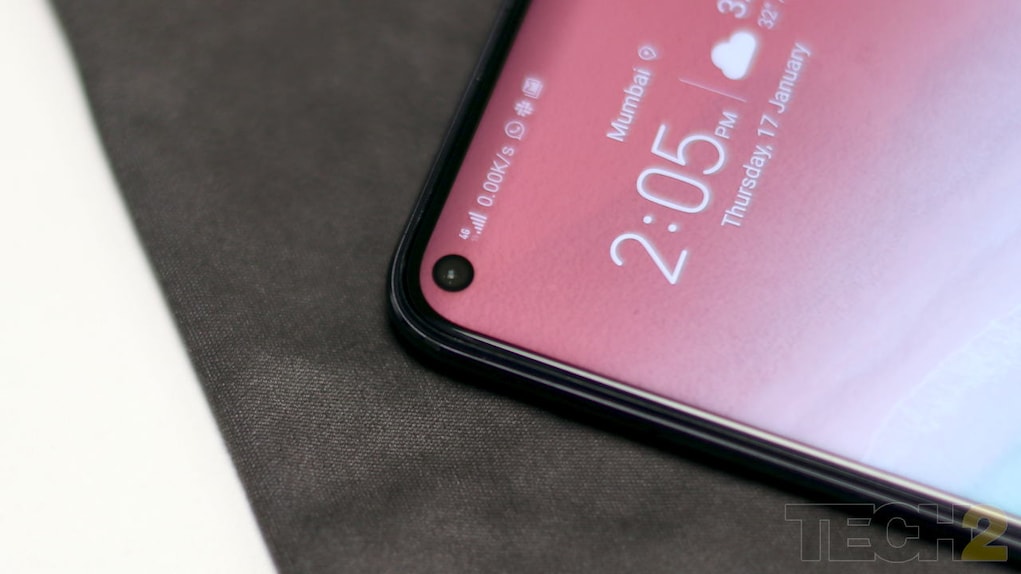 Indeed, the highlight feature of the View 20 is its punch-hole camera. It may look distracting at first, but after using it for a few days, I discovered that it was not as much of a distraction as the now standard, notch that usually sits at the top center. Image: tech2/Omkar Patne Part of the reason for this is the punch-hole camera’s placement, which comfortably sits around the top left corner of the display. This makes it less annoying as compared to a notch which eats up into the space meant for the status icons at the center. Honor’s 25 MP punch-hole camera is barely 4.5 mm in diameter, which makes it small enough to fit comfortably into the notifications bar. Image: tech2/Omkar Patne So where is the receiver speaker you may ask? Well, it’s tucked into the lipping that sits between the metal frame and the screen on the front at the top end. You have to look really close to notice it. Psst… there’s also an LED lamp hidden in there! Image: tech2/Omkar Patne Moving to the back, it looks electric! Indeed, the Midnight Black variant of the View 20 is the best finish even when compared to the red and blue models. At an angle, the light seeps through the layers and reflects off the V-shaped Aurora Nanotexture layer underneath resulting in a mesmerising rainbow-coloured strips that looks like there’s a second display underneath. Image: tech2/Omkar Patne Head on, the back of the Midnight Black model looks glossy. Inside that glass back sits a Kirin 980 7 nm SoC paired with 6 GB RAM and 128 GB storage. There a dual SIM setup for the radios and a 4,000 mAh battery that can be charged using the in-box 40 W charger. Image: tech2/Omkar Patne The camera assembly is made up of a main 48 MP camera. The strange looking capsule like ring next to it comprises of the 3D ToF (Time of Flight) sensor along with an LED flash. While the View 20 packs in core hardware that is comparable to the Mate 20 Pro, it skips on the Mate 20 Pro’s, triple-camera setup to cut down on price. The phone is expected to compete with the OnePlus 6T. Image: tech2/Omkar Patne The Honor View 20 is Honor’s first device to be announced for India this year. While the smartphone certainly checks the boxes when it comes to looks (almost bezel-less design) and innovation (punch-hole selfie camera), it’s results from the primary 48 MP camera, battery life, Honor’s Magic UI and pricing that will decide its fate against the OnePlus 6T. So do stay tuned for our full review. Image: tech2/Omkar Patne