Xiaomi's Redmi Note 5 and Note 5 Pro to go on sale today at 12 PM: All you need to know about the budget segment beasts

The Xiaomi Redmi Note 5 and Note 5 Pro will go on sale at 12 pm today, while the Mi LED TV 4 goes on sale at 2 pm on Flipkart as well as on Mi.com.

Xiaomi India announced the launch of its latest devices, the Xiaomi Redmi Note 5 and the more premium and powerful, Xiaomi Redmi Note 5 Pro a week back. Both smartphones have been creating a buzz since launch and it's finally time for them to go on sale. 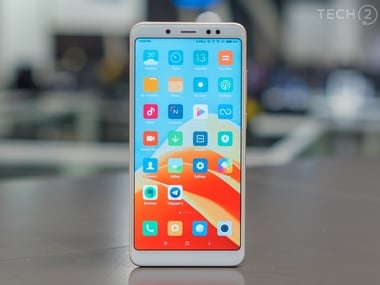 Both the Redmi Note 5 and the Redmi Note 5 Pro will have see their first flash sale at 12 pm today, on Flipkart as well as on Xiaomi's own e-commerce site Mi.com. Xiaomi will also have its first TV in India, the Mi LED Smart TV 4 on sale at 2 pm today on both Flipkart and Mi.com.

Going by specifications, the highlight of the Xiaomi Redmi Note 5 is its 5.99-inch FHD+ display with an 18:9 aspect ratio. Under the hood, it is powered by a Qualcomm Snapdragon 625 SoC along with the Adreno 506 GPU. In terms of the camera, it has a single camera on the back with a 12 MP sensor and f/2.2 aperture. On the front, we see a 5 MP camera with LED selfie-light.

The key features of the more powerful sibling, the Redmi Note 5 Pro is the debut of Qualcomm's Snapdragon 636 SoC with 8x Kryo 260 processor cores clocked at 1.8 GHz along with an Adreno 509 GPU. Xiaomi also packs in a dual-camera system on the back with 12 MP + 5 MP sensors arranged vertically in an iPhone X-like design. On the front, we see a 20 MP Sony IMX376 sensor with LED selfie-light.

Both the phones also feature dual-SIM 4G VoLTE capability, a rear fingerprint sensor and a 4,000 mAh battery. The phones will be available in Black, Gold, Rose Gold and Blue colours.

In a nutshell, the Redmi Note 5 ticks all the right boxes and offers a great package at a great price, but is no longer the budget king.

Want to find out why? Head over to our comprehensive review of the Redmi Note 5 right here.

The verdict on the Redmi Note 5 Pro, on the other hand, is that it is the eventual evolution of the Redmi Note series. It may be priced a bit higher in the budget to mid-range segment, but its performance (including its camera performance) easily makes up for its price hike. Why do we think that the Note 5 Pro is totally worth its price?

Head over here where you will find the answer to every query and also have a look at the camera samples from the Redmi Note 5 Pro.

If you are still in two minds about which phone to pick up and just cannot decide which one is right for you at your budget, head over to our head-to-head comparison of the two phones here.