Xiaomi Redmi Note 5 gets briefly listed on Chinese website; could be unveiled soon

Despite several leaks and rumours, the Xiaomi Redmi Note 5 has yet to go official. But it looks like the company just cannot stop teasing fans about the upcoming successor to the hugely successful Redmi Note 4. Just recently, the smartphone was spotted at a popular Chinese online retailer that listed the device for a brief time, giving buyers an idea about the device's price tag if nothing else. The smartphone was briefly listed on Chinese website JD.com with a price tag of CNY 8,888 (roughly Rs 88,000). However, this is just a gimmick according to GizmoChina as the number 8 is considered lucky in the Chinese culture. The real price of the phone is speculated to be around CNY 1,200 (roughly Rs 12,000).

There is no picture of the phone on the listing and the phone appears literally under the wraps as seen in the report by GizmoChina. However, back in October two devices had shown up on the TENAA website, with the model numbers MET7 and MEE7.  While the listings did not explicitly mention the model name, the Redmi 5A and Redmi 5A Prime had already been announced, so all hints pointed out at the much-awaited Note 5. 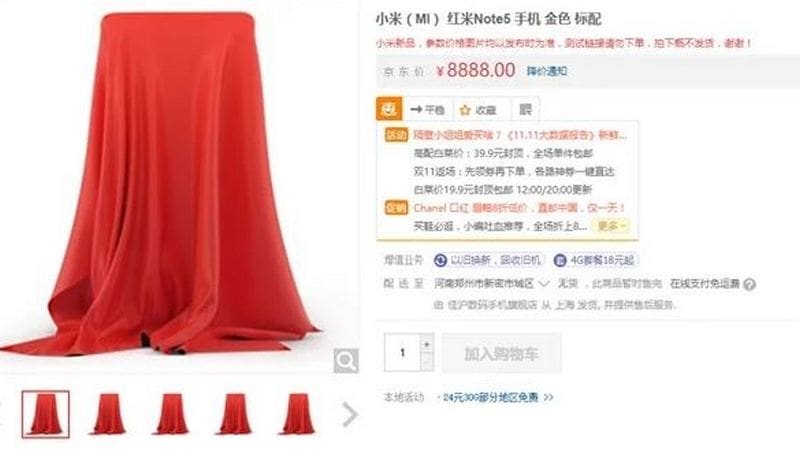 It has been reported earlier that the phone will have a display with an 18:9 aspect ratio with 2,160 X 1,080 resolution and a size of 5.9-inch. Not much is known about the chipset powering the phone but it will be have a 2.0 GHz octa-core processor. Given the speculated price of the device, it could be assumed that the phone could run on Snapdragon 636 platform. Indeed Xiaomi does not seem to be going for a bezel-less look, but just wants to fit a bigger display into a smaller footprint by reducing the size of the bezels to an extent. While the glass screen along with the taller display takes over the front, the back reveals the same Redmi Note 4 formula with plastic caps at the top and bottom ends and a metal back.