Xiaomi Mi Pad 4 is rumoured to launch along with Mi Max 3 and Redmi 6 Pro in July.

Ahead of the rumoured launch, a device carrying the model number M1806D9W, which is widely believed to be the Mi Pad 4, receives two certifications in China. According to a report by 91Mobiles, the purported Mi Pad 4 has been certified by China Compulsory Certification (3C) body in China, and by China’s Ministry of Industry and Information Technology (CMIIT).

Reportedly, the 3C listing of the device mentions that it is a tablet and carries support for 5V/2A charging. Building on the long-standing rumour of Xiaomi working on a Mi Pad 3 successor, it is anticipated that the leaked device is the Mi Pad 4.

Another recent rumour suggests that along with the Redmi 6 Pro and the Mi Max 3, Xiaomi will be launching the Mi Pad 4 in the month of July.

Other than that, last month, firmware files of the device surfaced online, which claimed that the Mi Pad 4 will be fueled by 6,000mAh. Which, if true, will be smaller than the 6,600mAh battery that is seen on the Mi Pad 3. 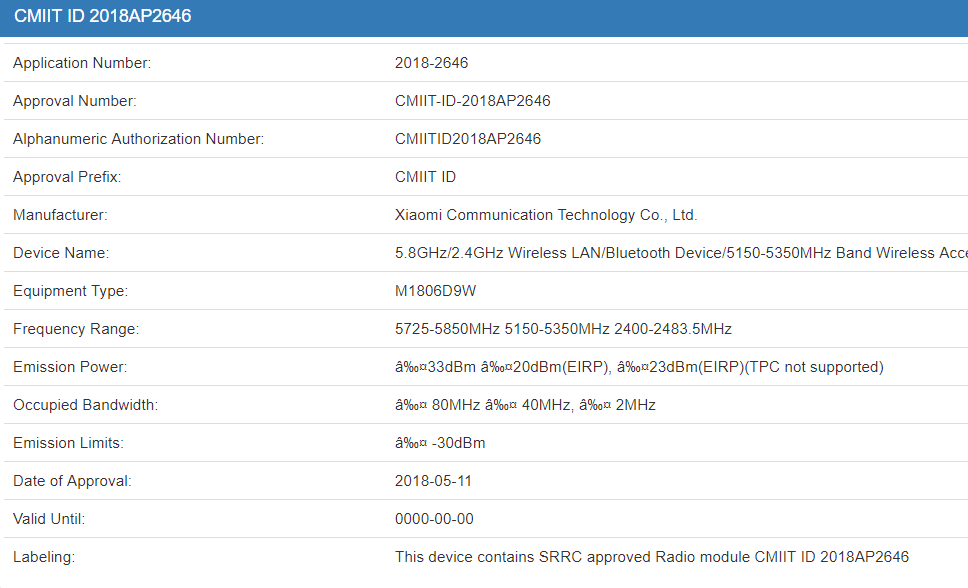 Specification of the purported Xiaomi Mi Pad 4, per a CMIIT certification.

The purported Mi Pad 4 is also rumoured to carry support for 5.8GHz/2.4GHz dual-band Wi-Fi. It is likely that like the predecessor model, the Mi Pad 4 will be only arriving in a Wi-Fi model.

Previous rumours also claim that the Mi Pad 4 will sport a 13 MP rear-mounted camera, along with a 5 MP sensor up front. Under the hood, it is believed to be powered by a Snapdragon 660 chipset, with octa-core processor, clocked at 2.0 GHz.

Similar to the Mi Pad 3, the purported Mi Pad 4 will be arriving with an LCD screen. The leaked firmware files also mentioned a possible 18:9 aspect ratio display on the device.

Do note, that none of these details have yet been confirmed by the company, which is why we advice you to take these details with a pinch of salt.