Based on the TV's launch in China back in October, the Xiaomi LED Smart TV 4C is expected to feature a Full HD panel, 1 GB of RAM and 8 GB storage.

Xiaomi recently introduced its first TV in the Indian market in the form of the Mi TV 4. Less than a month later, the company is expected to launch the Mi LED Smart TV 4C, with an official announcement due for 7 March. 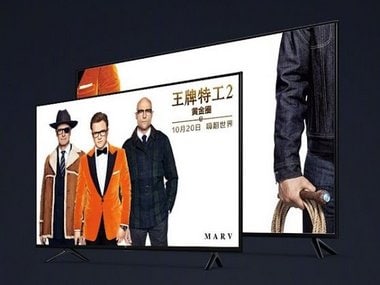 While the announcement date is still a few days away, Xiaomi has updated its online store with the television already listed, though not in stock yet. The listing on Mi.com also reveals the price of the TV which is stated to be Rs 27,999. Similar to the Mi TV 4, the new TV is also expected to arrive in a single 43-inch model, though the company may unveil more models on launch day.

Based on the TV's launch in China back in October, the Xiaomi LED Smart TV 4C is expected to feature a Full HD panel, 1 GB of RAM and 8 GB storage. The TV comes with ultra-thin, 9 mm bezels. As for the rest of the hardware, buyers will get a quad-core Amlogic T962 64-bit chipset that supports Wi-Fi, Bluetooth 4.2, Dolby and more. The TVs also support HDR 10 and do not include the Mi Bluetooth Remote Control, which is sold separately.

The report also features days after Xiaomi India MD, Manu Kumar Jain took to Twitter to tease the launch of a new model of Xiaomi Mi TV in the Indian market. The chatter around the internet points out that this new model could be the Mi TV 4A, a smaller version of the Mi TV 4 that is already on sale in the Chinese market.