Xiaomi Mi A1 spotted on Geekbench; likely to pack Snapdragon 625 and Android Nougat 7.1.2

One thing to note here is that if this indeed is Android One device than we may see the first smartphone from Xiaomi running stock version of Android.

A new upcoming Xiaomi smartphone, the Xiaomi Mi A1 has been spotted on the benchmarking website Geekbench.

According to the listing on the websites, we can expect the unreleased smartphone to pack an octa-core Qualcomm Snapdragon 625 clocked at 2.0 GHz. The smartphone will run Android Nougat 7.1.2 based MIUI out of the box.

We don’t know much about the smartphone apart from the Geekbench listing and the name ‘A1’. Recent reports indicated that the smartphone is likely to be Xiaomi’s upcoming Android One-based device that is expected to launch soon. The ‘A1’ in the code name matches up with the guess as it could mean Android One (1). 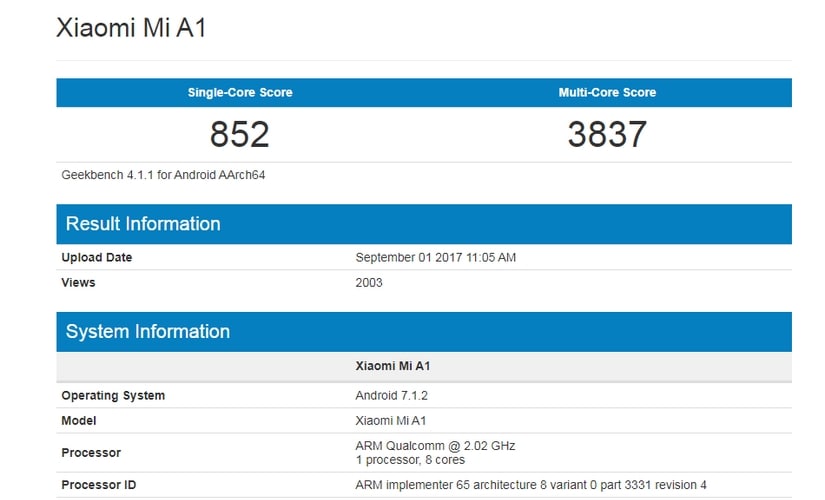 One thing to note here is that if this indeed is Android One device then we may see the first smartphone from Xiaomi running the stock version of Android.

Xiaomi India tweeted on its official Twitter handle confirming that the company will launch a smartphone with a dual-camera setup. The interesting part about the Xiaomi Mi 5X is that the company has already announced the device in the Chinese market. The company announced the Mi 5X in July with a cheaper 32 GB internal storage variant launched in August.

Xiaomi is also expected to launch the much awaited Mi Mix 2 at a launch event on 11 September 2017. Mi Mix 2 is likely to improve on its nearly ‘bezel-less’ design that Xiaomi showed off with the Xiaomi Mi Mix last year.