Xiaomi may bring Android One on its smartphones, claims report

This new rumoured partnership could perhaps make us see the quality budget smartphones of Xiaomi teamed up with Google's stock Android experience.

Google's Android One project, which aimed to bring stock Android experience for budget markets like India may be re-introduced in a Xiaomi smartphone according to a recent report by krispitech. Xiaomi had launched its Mi 5X for the Chinese market on 26 July, 2017. However, the phone has been spotted at an Indonesian telecom certifying agency called POSTEL. The report showed that the software had been designed by Google and also that the security features and apps from Google could be accessed by Android One. This could mean that the Xiaomi may plan to join hands with Google's Android One project giving its phones stock Android experience rather than running on the traditional MIUI.

These reports have been generated through guesswork and the sources have not verified any of this information. It is believed that the phone may not be called the Xiaomi Mi 5X but is rumoured to be called Xiaomi A1 instead. 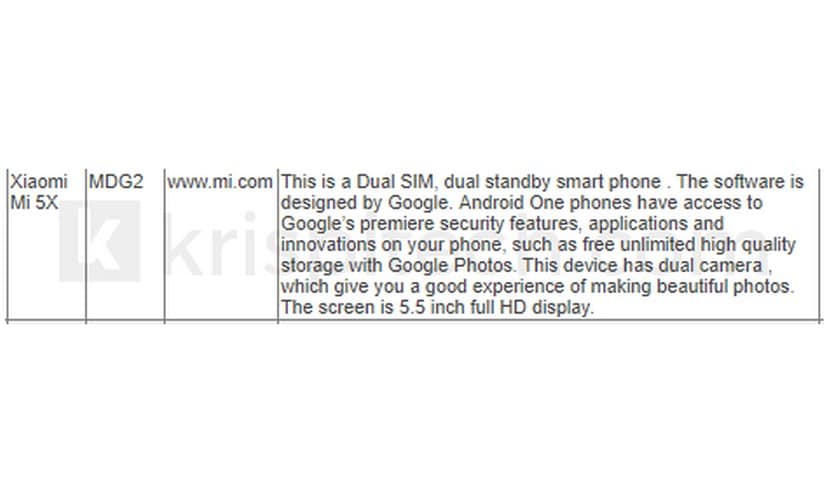 The report, however, states that this new Android One Xiaomi phone will be maintaining the 5.5-inch display, dual rear camera and dual-SIM slot of the Xiaomi 5X model. There are no reports of when this phone may eventually launch or whether it will reach the Indian market.

Google's Android One project started ambitiously in 2014 aiming to provide the stock Android experience on affordable smartphones that could remain smart even on the low prices. The launch of this project, however, could not garner the support needed from the consumers of budget smartphones and the project eventually lost the buzz.

This new rumoured partnership could perhaps make us see the quality budget smartphones of Xiaomi teamed up with Google's stock Android experience and reinvigorate the Android One project.