The benchmarks show that the phone has a score of 270,680, which is higher than the leaked scores of the yet-to-be-released Samsung Galaxy S9

Xiaomi, it seems, isn't just content with making budget smartphones. After some stellar sales of the Redmi Note 4, the Chinese smartphone maker had the highest number of smartphone shipments in India at nearly 8.2 million units. Now Xiaomi seems to be switching gears and looks to make an impact in the niche gaming smartphone market with a new device reportedly given the codename 'Blackshark'. It is being speculated that this device is from a company called Black Shark Technology in which Xiaomi has invested. The current, and only smartphone, which is very gaming centric is the Razer Phone, and if the Antutu benchmarks are any indication, then the Blackshark could very well rival the Razer Phone. As per the benchmarks, the smartphone will be coming with the Qualcomm Snapdragon 845 SoC paired with the Adreno 630 GPU. In terms of hardware, the leaks indicate 8 GB of RAM and 32 GB of internal storage. Xiaomi could launch a higher storage variant as well if and when this phone becomes official.

It seems that the Blackshark will also have a FullHD 18:9 display and come with Android Oreo 8.0 out-of-the-box. The benchmarks show that the phone has a score of 270,680, which is higher than the yet-to-be-released Samsung Galaxy S9, which had a score of 265,267. No more details are currently available about this rumored device. 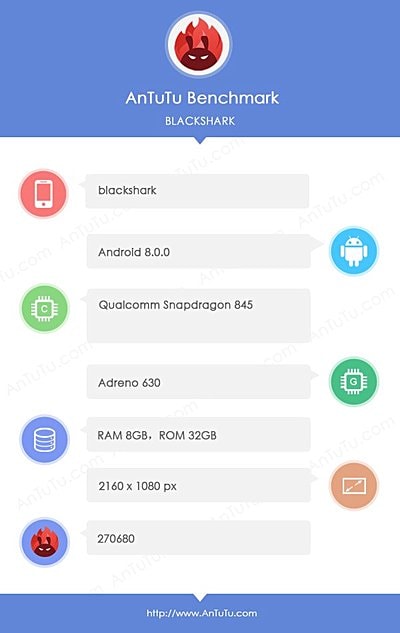 AnTuTu benchmarks for the Blackshark.

However, the thing that set the Razer Phone apart was its 120 Hz refresh rate, making the interface silky smooth. Now there are no indications, from the benchmarks, of any feature like that on the Blackshark, but Xiaomi could tweak the phone settings to bring in something similar. Right now, the phone has just been spotted on benchmarks and no official announcement of any kind has been made by Xiaomi, but we shall update you on it as soon as more information is available.