The Wynk app is currently only available on Android and supports 12 Indian regional languages.

The online video streaming market is growing by the second. And since Spotify's and YouTube Music's recent entry into the Indian market, the competition has grown intense. In a bid to keep up with its competitors, telecom giant Airtel has announced a YouTube-like platform in India, called Wynk Tube. The new service caters mainly to the tier 2 and tier 3 audiences in the country, with an emphasis on Bhojpuri, Punjabi, and Hindi audio and video content.

Wynk Tube is an extension of the Wynk Music app, and it allows users to stream audio and video music content within the same interface. Users can instantly switch between audio and video mode of songs with a single touch similar to what you get on the YouTube Music app.

The app has also been designed keeping in mind the internet bandwidth available in lower-tier cities in India. With a small 5 MB installation package, the app is compatible with basic smartphones and even with devices running Android Go. Currently, Wynk Music is only available for Android users. The app will be available to users in 12 Indian regional languages (including Kannada, Marathi, Telugu, Tamil, Bhojpuri) besides English and Hindi. However, when we tried out the app, the setup process uses Hindi as the default language. 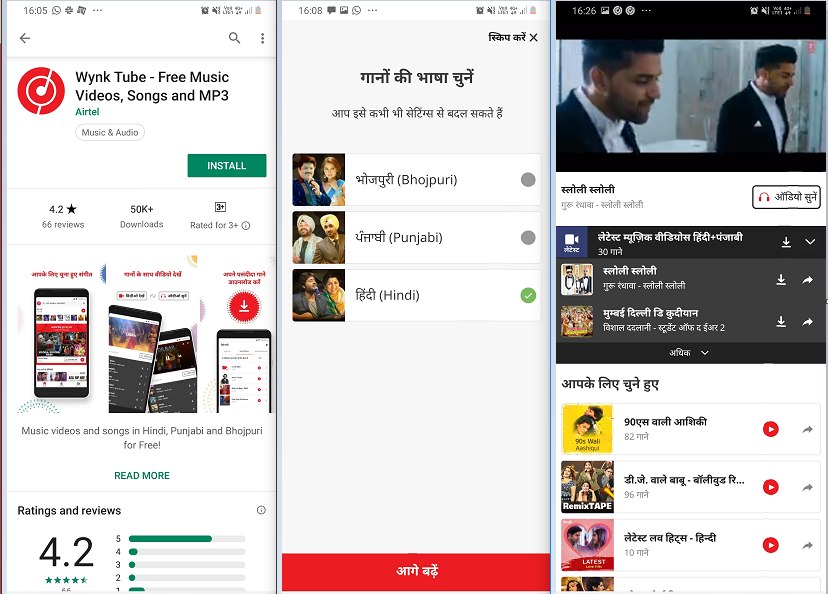 Wynk Tube app is currently only available of Android.

Airtel users do not have to pay any subscription charges for Wynk Tube and they also get access to unlimited streaming and downloads.

Non-Airtel users can also use the app without paying a subscription but they will have to deal with the ads on the app. But if you are already a Wynk Premium user, you will directly get signed into your premium account on Wynk Tube. No separate charges will be applied.

Wynk Tube app also automatically adds all MP3 music files stored on your smartphone as a separate playlist. This means you don't have to switch apps to listen to locally stored music.

Additionally, Wynk Tube will have something called 'One touch play', which will be a welcome playlist for new users. Similar to the Wynk Music app, Wynk Tube will also have weekly playlists, that will be refreshed for each user based on their browsing/streaming history.