With 800 mn views, PSY's 'Gangnam Style' is most watched on YouTube

The milestone was the latest pop culture victory for Psy, 34, a portly rap singer known for his slicked-back hair and comic dance style who has become one of the most unlikely global stars of 2012.

Psy succeeded with a video that generated countless parodies and became a media sensation. He gained more fame outside his native country than the more polished singers in South Korea's so-called K-Pop style who have sought to win international audiences. 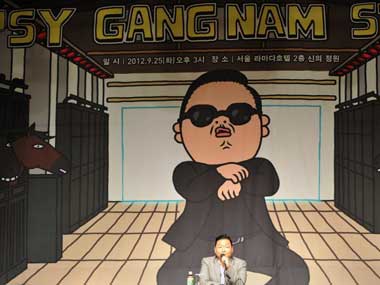 Gangnam Stylewas first posted to YouTube in July, and by the following month it began to show huge popularity on YouTube with audiences outside of South Korea.

"It's been a massive hit at a global level unlike anything we've ever seen before," said the YouTube blog.

The blog also said the "velocity" of the video's popularity has been unprecedented for YouTube.

In his "Gangnam Style" video the outlandishly dressed, sunglass-wearing Psy raps in Korean and dances in the style of an upper-crust person riding an invisible horse.

The song is named after the affluent Gangnam District of Seoul and it mocks the rampant consumerism of that suburb. Psy, whose real name is Park Jai-sang, is no stranger to wealth as his father is chairman of a South Korean semiconductor company.

His parents sent him to business school in the United States but he confesses that he bought musical instruments with his tuition money. He later graduated from Berklee College of Music in Boston and won fame in South Korea with his 2001 debut album.

The viral success of Gangnam Styleon YouTube also has translated into strong record sales. In late September, the song jumped to the top of the British pop charts and it also has sold well in other countries.

Popular parodies of the Gangnam Style video included one featuring the University of Oregon's duck mascot, and another done in the Star Treklanguage Klingon.

The official YouTube view count for Gangnam Style represents only the figure for the original video posted to the site, but copycat versions, parodies and videos by people commenting on the song have been posted to the site and elsewhere on the Web.

Counting all those different versions, "Gangnam Style" and its related videos have more than 2.2 billion views across the Internet, said Matt Fiorentino, spokesman for the online video tracking firm Visible Measures.

"Without the dance, I don't think it would have been as big as it is," Fiorentino said. "And the other thing is, Psy has a unique sense of humor which comes through in the video. He doesn't take himself too seriously."

With 800 mn views, PSY's 'Gangnam Style' is most watched on YouTube

Psy opens up about his drinking problem