Facebook-owned WhatsApp has rolled out a feature where the user can add location and time stickers. According to the Google Play Store and Apple App Store, Facebook-owned WhatsApp has rolled out a feature where the user can add location and time stickers. This is similar to Instagram and Snapchat where the user could add similar stickers while sharing videos and photos.

After updating both app we can tell that the location feature has not been made official in Android just yet, making it exclusive only to iOS users at the moment.

How can one add stickers to the photos and videos?

Simply select a photo from your gallery or shoot one using the WhatsApp camera. Then, tap on the smiley icon to access the sticker section of smileys, time stamps and location stamps present. Here, you can see a dial clock and time sticker which indicates the current time and current location. Tap on any of the stickers to add them to your image or video.

You can change the size of the stickers by simply pinching in to increase its size or pinching out to reduce its size. Tap and hold to move and place the stickers on your image. 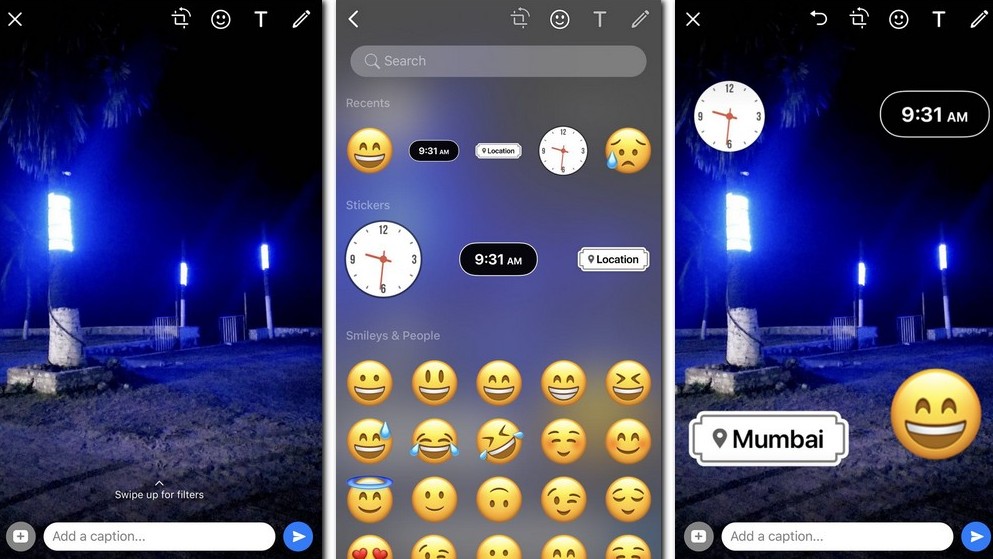 To remove the stickers, users can drag and drop it in the delete (or dustbin) icon placed on the left of the screen.

Apart from this, WhatsApp has been testing another feature where users who receive forwarded messages will be notified about it.

This new feature comes in the wake of fake news, and spreading of misinformation. No modification or changes have been made to the chat.