What's the real value of PhonePe, which wants to be India’s second-biggest unicorn?

Is PhonePe, the payments arm of Flipkart, the hidden gem in Walmart’s Indian crown with a valuation of $10 billion? Or is it something rather less dazzling?

Over the last few months, PhonePe has been engaged in discussions with investors for a funding round of up to $1 billion. Reports indicate that the asking price for the company, which was founded by three former Flipkart executives, values it at between $8 billion and $12 billion. At that level, PhonePe would be the second most valuable unicorn in India after Paytm.

However, the talks seem to have deadlocked over the valuation sought by Walmart, which paid $16 billion to buy a 77 percent stake in Flipkart in 2018. If PhonePe alone is worth $10 billion, Walmart certainly bought Flipkart at a bargain. But what do the facts say?

In September, investment bank Morgan Stanley pegged the value of PhonePe in a ‘base case’ scenario at $7 billion. This valuation is based on a number of assumptions. One of the presuppositions is that Flipkart should hold a 50 percent share in the ecommerce market (probable) and 65 percent of mobile transactions are processed through PhonePe (probable again). PhonePe should corner 22 percent of payments business excluding Flipkart transactions (it had around a 40 percent share of the total UPI payments) and it should make $50 million in revenue from payments (total revenue was Rs 200 crore last year, or about $29 million).

Besides, Morgan Stanley assumes that for the $7 billion valuation to hold, PhonePe must make $350 million from distribution of financial services, and $1 billion from consumer lending. (PhonePe has not started lending yet; it has started selling direct mutual funds as one of its first steps into becoming a broader financial services platform.)

On the whole, when it comes to the vital assumptions about revenue, PhonePe falls short. Which means that this ‘base case’ may not really be applicable. 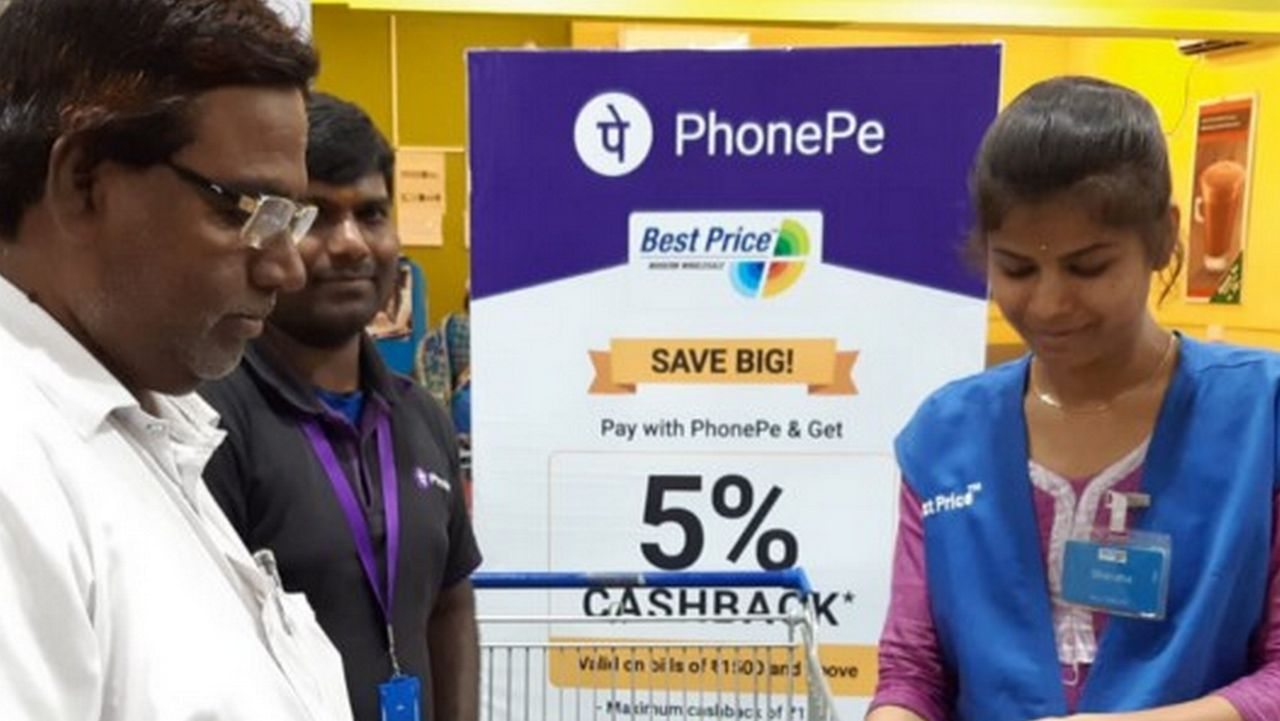 The case of precedent

In November, PhonePe received its fourth round of funding for 2019 from Flipkart, when it raised $82.5 million at a valuation of about $1.9 billion. Previous funding rounds valued the company at $1.55 billion (September) and $1.03 billion (February).

If Flipkart is valuing PhonePe at less than $2 billion, how does it convince outside investors that they should value the company at five times as much?

Paytm, the poster child of digital payments in India, was valued at $16 billion during its last funding round announced in November 2019. Paytm’s revenue is Rs 3,000 crore, compared to Rs 200 crore for PhonePe. If the revenue multiple were to be the benchmark, PhonePe would have to be valued at just over $1 billion. Paytm has already expanded into becoming a digital bank and into other financial services like mutual funds, loans, games, ticket booking and others. PhonePe is just about starting to expand beyond payments. Even in payments, less than 20 percent of PhonePe’s transactions are at merchants.

The case for PhonePe

What PhonePe has managed to show is a steady rise in transactions and a strong jump in revenue, demonstrating the potential to assume leadership in payments. It has been leading the UPI race and giving strong competition to Google Pay, which has seen a dramatic rise in adoption over the last year. PhonePe has clocked more than 500 million transactions on UPI in December. This number was close to 410 million in November and 340 million in August. The company itself claimed that it had reported more than 90 million offline transactions in August, having rapidly expanded its small merchant base for QR code payments.

Walmart is trying to hook China’s Tencent (a backer of Flipkart, Ola and Swiggy) as the lead investor in PhonePe. Tencent, in effect, is an insider because it still owns about a 5 percent stake in Flipkart and has a board seat. If Tencent is chary of biting into PhonePe at $10 billion, the message is obvious.

The canny Pony Ma, the founder of Tencent, is deeply aware that he will be taking on the might of Alibaba (Paytm’s backer), Google (Google Pay) and Facebook (WhatsApp Pay) with a big investment in PhonePe. He will want a payment play in India at the right price, but not any price.

So how much is PhonePe really worth?

Valuation, they say, is more art than science.

Sometimes it has little to do with mathematics. But the whole point of this piece is to stick our necks out, and this is the bottomline: PhonePe clearly does not meet the criteria for the Morgan Stanley ‘base case,’ which means it is definitely not worth $7 billion. The valuation assigned by Flipkart (Walmart) in November is $1.9 billion. Assuming that PhonePe is growing like a teenager on steroids, and that valuation is a liberal art, anything more than $2.5 billion for the payments company today is a bonus.

Walmart sacks around 56 executives in India restructuring, focus to be shifted to e-commerce; firm to delay opening of new wholesale stores

There are ‘a lot of problems’ with Amazon chief Jeff Bezos’ Washington Post: BJP official