Solar Eclipse 2017: Where and how to watch the eclipse, even if you are not in the US

Meanwhile, a live stream will take place from NASA Television and at various NASA locations.

After 99 years in the US, the moon will eclipse the sun, keeping the Earth in temporary darkness for a few minutes. Also known as the solar eclipse, this celestial event will take place on 21 August and will be visible from North America primarily the United States. The path of the total solar eclipse will be passing from Oregon diagonally all the way through South Carolina in the southwest. 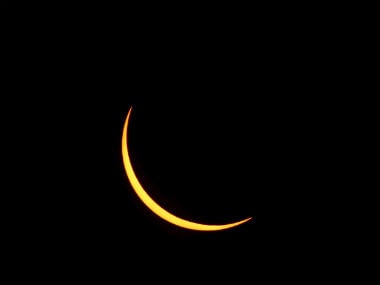 This once in a lifetime event can be viewed in different ways even by those who are not in the US.

Space enthusiasts will get to see a wealth of images, both before and after the solar eclipse, captured according to NASA, by “11 spacecrafts and three NASA aircrafts, 50 high-altitude balloons, and astronauts who will be aboard the International Space Station.”

The "Eclipse Preview Show" will be hosted from South Carolina from 12 pm EDT (in India at 9:30 pm IST) and the Solar Eclipse will be streamed from 1 pm EDT (10:30 pm IST). The eclipse route is supposed to be from Oregon to South Carolina. They will broadcast live reports from each state in the US the eclipse will cover.

The eclipse is supposed to last for 100 minutes and will cover 14 states across the United States.

The last time the moon had eclipsed the sun was in 1978.

NASA has also released a video on how to safely watch the total solar eclipse. The eclipse, whether total or partial, should not be viewed with the naked eye, but only through proper eclipse glasses. According to NASA, the rays emitted from the sun during partial or total solar eclipse are harmful for the retina. The eclipse glasses are made using special purpose solar filters. They should not be mistaken for regular sunglasses, which cannot be used to view the celestial spectacle.

For those viewing with telescopes, will also need to ensure that the telescopes are protected with proper solar filters. " The only ones that are safe for direct viewing of the Sun with your eyes are those of Shade 12 or higher. These are much darker than the filters used for most kinds of welding. If you have an old welder's helmet around the house and are thinking of using it to view the Sun, make sure you know the filter's shade number. If it's less than 12 (and it probably is), don't even think about using it to look at the Sun," according to NASA.

The last solar eclipse that occurred in the US was in 1917. The total blackout period is expected to last for a few minutes along the 73-mile wide 'path of totality' that will run diagonally across the US.