Volkswagen has scaled back brand presentations at traditional car shows, including Detroit and Frankfurt since the VW emissions scandal erupted in 2015.

Volkswagen will not display its core brand at the Paris motor show this year, the latest and most prominent carmaker to swerve the biennial industry gathering. 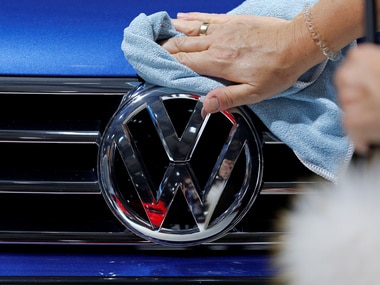 A worker shines the grill of a Volkswagen car displayed on media day at the Paris auto show. Image: Reuters

Europe’s largest automotive group has scaled back brand presentations at traditional car shows, including Detroit and Frankfurt since the VW emissions scandal erupted in 2015.

This has partly been seen as a cost-cutting measure for VW which has been reducing spending to counter the multi-billion dollar costs of dealing with the fallout of cheating diesel emissions tests, but it also mirrors a wider sector trend.

Jean-Claude Girot, the head of the Paris show organizers told Reuters his department has an agreement with VW that the German brand will take a stand at the next exhibition in 2020.

“This is a one-off decision rather than a permanent loss of interest on VW’s part,” Girot said. “When a brand decides not to book a stand it’s usually to reduce costs.”

Many of the traditional industry gatherings have registered a drop in visitor numbers since 2000, forcing carmakers to rethink how they spend their marketing budgets.

“The Volkswagen brand is continually reviewing its participation in international motor shows,” it said on Thursday, adding it could instead host “various communications activities” in the French capital, including test drives.

Whether or not VW will return to Paris in 2020 “will be assessed in due course,” it said.

VW’s luxury division Audi gave up its own pavilion in Frankfurt, which hosts Europe’s largest auto show in alternate years, for the first time in many years in 2017.

Audi will also skip the 2019 Detroit show, which the VW group attended with a significantly reduced line-up this year, underlining the wider shift away from such gatherings. The Volkswagen e-Golf Touch car is displayed on media day at the Paris auto show, in Paris, France. Image: Reuters

“Excessive costs and very poor benefits for customer ties and image building simply don’t justify the effort,” said Ferdinand Dudenhoeffer, director of the Center for Automotive Research at the University of Duisburg-Essen. “Car shows are doomed unless they find a new approach.”

Among the reasons for the decline of the shows is the emergence of technology as the main battleground for connected, autonomous cars, which has drawn exhibitors to competing events such as the Consumer Electronics Show (CES) in Las Vegas and the Mobile World Congress in Barcelona.

Girot said the duration of the Paris show has been reduced slightly after many exhibitors had asked for a shorter event to keep costs in check, adding that some first-time participants including Guangzhou Automobile Group had been signed.

But carmakers cannot afford to skip China’s annual event, alternating between Beijing and Shanghai, as it showcases the latest tech and trends in the world’s largest vehicle market which experts view as a leader in electric and self-driving cars, Stefan Bratzel, head of the Centre of Automotive Management think-tank near Cologne, said.