The Vivo Z5x was also recently spotted on Geekbench and it was shown to have 8 GB of RAM.

Chinese smartphone maker Vivo has confirmed that it will be launching a new smartphone called the Vivo Z5x in China on 24 May. The device follows the announcement of the Vivo S1 Pro smartphone in China for a price of CNY 2,698 (approximately Rs 27,782). The poster for the Vivo Z5x was shared by the company on its official Weibo account but it showed no details about the smartphone apart from the launch date and time. However, the device has been in the rumour mill and as such leaks about the device's specs have trickled out.

The device is said to come with a punch-hole display which would be the first smartphone from Vivo to have this design language. It is also said that the phone will come with a Snapdragon 710 chipset and a 6.53-inch IPS LCD display that will probably carry support for full HD+ resolution. There are also rumours of a behemoth 5,000 mAh battery in the device. 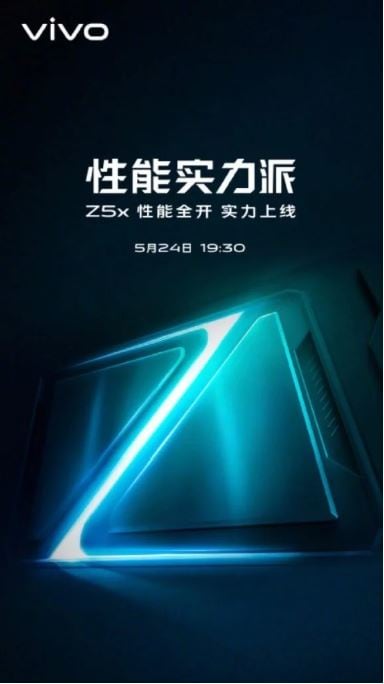 In terms of camera, there is speculation that the device will come with a triple-camera system and on the front, there is likely going to be a 16 MP sensor. The device was also recently spotted on Geekbench and it was shown to have 8 GB of RAM along with Android 9.0 Pie which will likely be overlayed with Vivo's proprietary FunTouch OS. The device had a single-core score of 1848 and multi-core score of 5915 which is in line with devices having a Snapdragon 710 chipset.

There is no information about the price of the device but seeing the specs we can put it in the mid-range category. There is also no word if the device will make its way to India or not.