While it has many spec clones, the Vivo X60 Pro stands out for its stellar camera and slim form factor.

The Vivo X60 Pro is the middle child of the Vivo X60 series that was launched recently. Priced at Rs 49,990 for the 12 GB RAM and 256 GB internal storage version, the X60 Pro slots in between the standard X60 and the fully-loaded X60 Pro+. While it isn’t the top-of-the-line version, it still possesses enough premium features to justify its existence. But how does the Vivo X60 Pro come together as a package? Is this the phone that will best fit your needs on a Rs 50,000 budget? We answer all your questions in our comprehensive review.

The Vivo X60 Pro is available in two colours – Midnight Black and Shimmer Blue. The phone is crazy thin, at just 7.59mm in thickness. The slim form factor, curved screen and glass back panel with a satin texture come together to make this phone a pleasure to hold. The Vivo X60 Pro feels expensive, and the textured power button just adds to the experience.

I tested the Shimmer Blue variant, which I thought looked a little gaudy. The bundled cover does a good job of reducing the shimmer while retaining the slim feel of the phone. It also protects the camera well, considering the module juts out quite a bit. However, I do feel Vivo has prioritised protecting the look and feel of the phone over protecting the phone with this cover. It seems to protect only the four corners of the phone, leaving the sides of the phone to fend for themselves. If the phone landed on any of these sides, the screen (and possibly the glass back panel) could shatter. If I were buying, I would invest in a better cover right away. 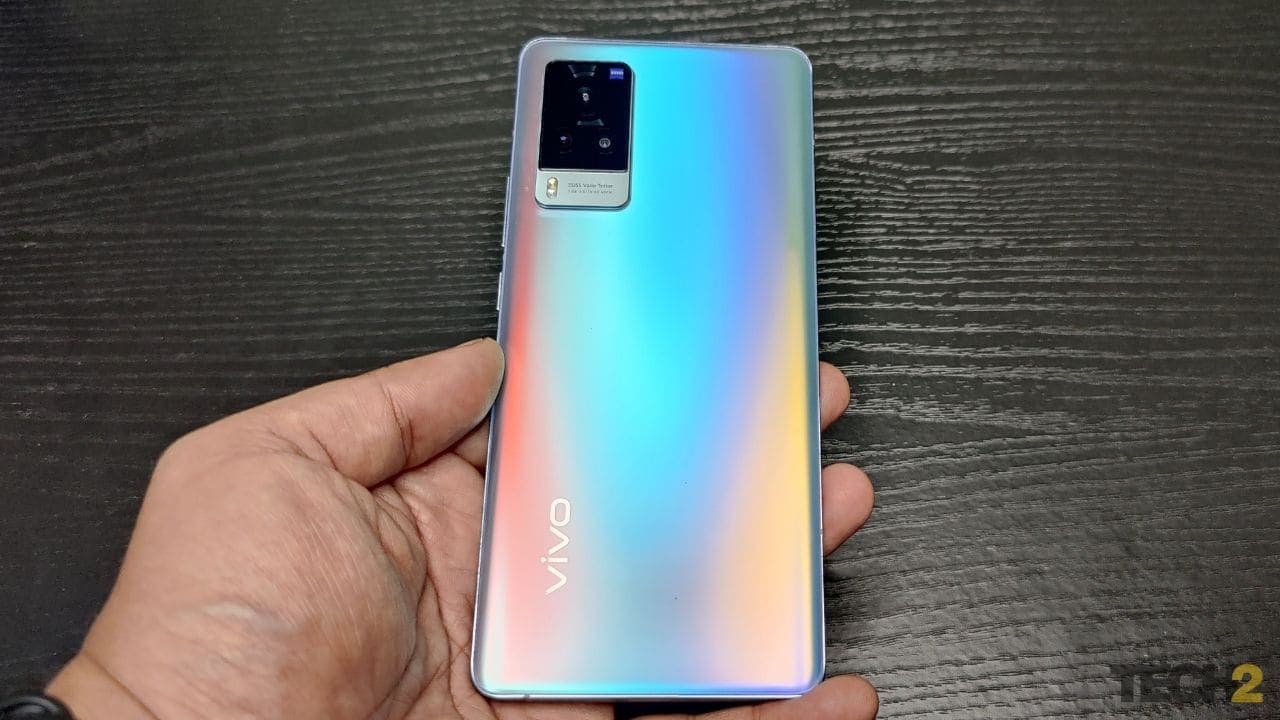 There is no official IP rating for the X60 Pro, but there is a rubber gasket on the SIM tray which tells me Vivo has done some basic waterproofing to protect the phone. The device is also light, weighing just 179 grams.

In the box, Vivo includes a fast charger and wired earphones. I don’t remember the last time I saw a pair of earphones included, and that put a smile on my face.

However, speaking of audio, there is no stereo sound on this phone – and that’s not the end of the speaker woes. While this tiny little speaker is loud, the output is screechy and generally terrible. It cheapens the overall experience and is probably the reason earphones are included in the bundle. The earphones themselves are of good quality, which is a big plus.

The display is a modest size, at 6.56 inches. It is an AMOLED screen with a 120Hz refresh rate and a 2376 x 1080-pixel resolution. While this sounds big, the actual feel and useability of the device are its strengths. Vivo has paid attention to the feel of the phone, and it oozes luxury.

What is not luxurious is the included screen cover. It is rather rubbery, feeling more like packing material than a protector. I would recommend removing it for the complete phone experience.

The screen is protected by Gorilla Glass 6 front and back, and should protect it from most scratches. It has HDR10+ certification, which translates into better visuals when gaming and watching movies. It is also bright enough to be legible under direct sunlight.

The screen has a punch-hole camera; that said, I don’t like punch-holes in my screens, especially ones that are positioned top-centre. The dimensions of this phone are so good that I don’t really want anything like an additional bezel or a pop-up camera to mess with it.

The Vivo X60 Pro runs Funtouch OS, which is quite an odd, almost inappropriate name for an OS. It has a minimalistic look which I like, and, in most cases, it works fine. The biggest gripe I have with it is the constant pushing of sponsored content. Since this is the Pro version, Vivo gives me some options to get rid of unnecessary distractions. There is a folder full of Hot App and Games links that I can’t get rid of. It isn’t a good look to call folders in FunTouch OS ‘hot’.

Vivo has also included its own app store to the phone along with Google Play store. However, V-Appstore keeps pushing apps such as Teen Patti, MPL and Snacky Takatak as essentials every time you open it. Again, you cannot delete this extra App store.

The X60 Pro is powered by a Snapdragon 870 chip which has an Adreno 650 GPU. This thing can handle long gaming sessions with ease. Running games on their highest settings is not a problem. Everything runs smoothly and is represented well on the 120Hz display. The 240hz response rate definitely has its benefits in games such as Free Fire. While the phone can handle gaming at max settings, it cannot handle the heat generated. This phone heats up a lot relatively quickly. Genshin Impact took approximately 15 to 20 minutes to get the phone hot. You can still play it, but it isn’t comfortable at that point.

In regular use, the phone remains cool, but extended video watching sessions and heavy app use can make the phone heat up again, but this is nowhere close to how hot the phone gets during heavy gaming sessions.

The Snapdragon 870 may not be the flagship 888, but you wouldn’t be able to tell the difference while using the phone. It’s in the camera department where the Vivo X60 Pro truly shines. After all, it has to justify the bold ‘Professional Photography’ inscribed right on top of the phone, as well as the Zeiss collaboration.

Sure, it isn’t the X60 Pro + with its fancy camera setup, but this one has a few tricks up its sleeve as well. For starters, the main 48 MP camera has Vivo’s Gimbal Stabilisation 2.0. This thing is a game-changer. The videos from this phone are super-smooth, and with pictures, there is almost no blur, even when capturing a quick-moving subject. However, the camera does struggle with focus in Macro mode. I had to take several shots of the same subject to snag one without any blur. The other gripe I have with it is the Supermoon mode. It doesn’t work at all. Sure, I got some nice-looking night shots, but no Supermoon shots. I feel the option was only included because it exists in the X60 Pro+, and they forgot to remove it from this one. Speaking of Night Mode, it is deeply impressive and certainly one of the best night modes I have experienced. Colour and details in the shots taken in this mode are excellent. You can do a zoomed-in shot, a wide-angle image or even a night panorama shot, which is something I haven’t seen before.

Portraits – especially ones shot using the main camera – will leave you impressed. The blurred effect is executed well especially around the hair, which is great. There are bokeh effects such as hearts and butterflies that can be added for a fancier shot. The front-facing camera, unfortunately, doesn’t offer the bokeh effects. While portraits shot using the selfie camera look good, the blurred effect isn’t as impressive as with the rear camera.

Colour reproduction in most cases is rather good. There is a bit of a reddish tinge on portraits, but not something that can’t be fixed with some editing.

Video production on this phone also benefits from the gimbal. You can shoot super-smooth video even from the back an auto-rickshaw, and there is even a cinema mode that crops the video into a wide cinema 2.35:1 format. The microphones can also be utilised to focus on subjects, while reducing background noise. What is missing, though, is a Pro video mode, which is a shame since this camera is crying out to be used for filmmaking.

Along with the camera hardware, a lot of the credit goes to the software. The extra settings for each mode have clearly been thought out. And this is precisely what makes the non-working Supermoon mode even more frustrating. The 4,200 mAh battery capacity on the X60 Pro is a little lower than most phones in this price range, but it doesn’t feel lacking in regular operation. It could easily last a day while performing everyday tasks. However, crank up the intensity to full, and the battery lasts a little over four hours and 30 minutes. Fortunately, the Vivo X60 Pro charges like a champ with the bundled 33 W charger, so a full charge takes approximately an hour and 10 minutes from zero. This charging speed reduces the relevance of a larger battery, and at the same time, lets this phone benefit from an incredibly thin form factor. So, it was well worth the sacrifice.

The Vivo X60 Pro is a phone that I think will find a lot of takers, simply because it is priced right. Despite not being the flagship of the series, it manages to sacrifice precious little in the end. I think a value-conscious market like India will appreciate the balance this phone has managed to achieve.

Vivo does, however, need to rethink FunTouch OS, starting with the name but more deeply with the inclusion of unescapable paid content and app pushes. Vivo: please start sparing the Pro and Pro+ versions of your phones from this. People have paid extra for a better device, charge them a little more so you don’t have to push this content onto them.