The two Chinese posters do not shed any light on the specifications and details of the Vivo X20 smartphone.

Vivo seems to be jumping in the 'bezel-less' display wagon as well after photos appeared of the Vivo X20 phone in FIFA's promo posters for next years World Cup. Vivo is the official sponsor for the 2018 and 2022 FIFA World Cup after signing a deal with Football administration body back in May. 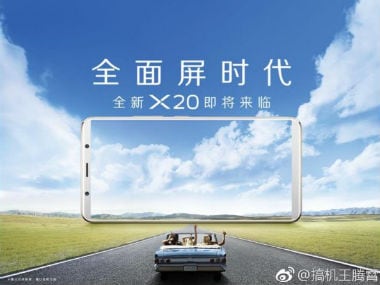 The two Chinese posters do not shed any light on the specifications and details of the X20 smartphone. It only shows the front side of the phone which shows minimum bezels at the top and bottom of the phone sporting a display of 18:9 ratio. Apart from that we can see the volume control buttons, presumably the power button, and also a single front camera. Also we see that the phone will be atleast available in two colours of black and white.

According to Android Headlines, it's being speculated that the Vivo X20 will have two variants namely X20 and X20 Plus. The report claims that the phone will be having a 5-inch or a 5.5-inch FullHD (1920 x 1080) display and house 64 GB of internal memory alongside 4 GB of RAM. Word is that the processor used would be an octa-core Qualcomm Snapdragon 660. The specifications are for the time being only rumours and no concrete details have yet been revealed.

This news comes after Vivo and Oppo said that they would move their cloud service locations to India. However, both the leading cloud servers, Amazon and Azure Cloud did not comment whether the Chinese smartphone makers are asking them to change their remote data storage locations to India.