Vivo V9 will be powered by Qualcomm Snapdragon 626 SoC clocked at 2.2 GHz with 4 GB RAM and 64 GB internal storage with an option to add microSD card.

Vivo India has launched its latest smartphone in the Indian market, the Vivo V9 at a launch event in Mumbai. 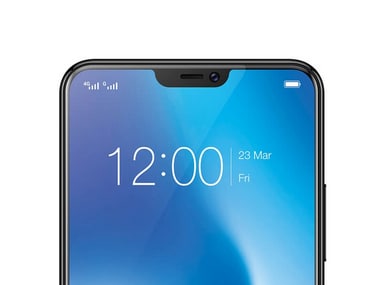 The Vivo V9 has been priced at Rs 22,990 and the pre-booking starts from 23 March on Flipkart, Amazon and Paytm Mall. The Vivo V9 will go on sale from 2 April onwards in both offline and online stores.

Most of the specifications had already leaked when the company accidentally listed the device on its website along with all the details about its hardware as well as software features almost a week before the launch of the device.

Vivo already launched the device in Philippines yesterday. The Vivo V9 will pack a 6.3-inch IPS LCD screen with 19:9 aspect ratio and FHD+ resolution with 2280 x 1080 pixels, boasting 90 percent screen-to-body percentage with that iPhone X-like notch on the top.

V9 will be powered by Qualcomm Snapdragon 626 SoC with 4 GB RAM and 64 GB internal storage. Vivo will also give users an option to add a microSD card with up to 256 GB capacity for expandable storage. The device sports a ‘triple card slot’ where users have the option to add dual nano SIM cards and a micro SD card. It comes with a 16 MP camera sensor with an f/2.0 aperture and a 5 MP camera sensor for sensing the depth on the back of the camera.

However, the highlight feature of the device is its 24 MP camera sensor on the front of the device with an f/2.0 aperture for improved selfies. It is likely to pack a new ‘AI Face Beauty’ feature to ‘truly represent’ the beauty of its users. Vivo V9 will sport Android 8.1 Oreo-based Funtouch OS 4.0 out of the box. The specifications image claims that the device will sport AR stickers along with ‘Smart Split 3.0’ for ‘Easy Multi-Tasking’.

V9 will also come with ‘AI Smart Engine’, which according to the company, will boost the performance of the device by taking care of storage management and app launching by keeping track of the usage of the user. The device will also come with ‘AI Face Access’ with improved accuracy of face unlock and ‘AI Attention Sensing’ where the device will detect if you are looking at the screen of the device and then reduce the volume of any new incoming notifications as detailed in the report. Last but not the least, the V9 will come with a microUSB port, OTG, GPS, dual-band Wi-Fi, Bluetooth v4.2 and headphone jack.