Let's find out if Vivo V9 break new ground by bringing the ‘near bezel-less’ display along with the ‘notch’ to the mid-range pushing rivals to innovate.

Vivo India just launched its first smartphone for the year 2018 and has christened it as the Vivo V9, being the spiritual successor to the previous V7 model. The company announced the launch of V9 at an event held in Mumbai. Vivo at event, boasted about how it was the first to launch a device with such a high screen-to-body ratio in the mid-range segment.

The company priced the Vivo V9 at Rs 22,999 to aim for the mid-range price segment where it will compete with smartphones like the Moto X4, Moto Z2 Play, Honor 9i, and even the Redmi Note 5 Pro. Vivo India has sent us a review unit, I have been playing around with it for the past two hours.

So does the V9 break new ground by bringing the premium ‘near bezel-less’ display to the mid-range? Or is it just an iPhone X clone? Here are my first impressions.

Vivo V9 may look like a copycat of the Apple iPhone X that launched last year with the notch and the ‘Full View 2.0’ display. But the fact remains that you can’t deny how good that 6.3-inch screen and the bezel-less display looks in real life. The device comes with a metal back that curves on the edges to meet the display on the front. Vivo has added plastic caps on the top and bottom on the device with a metallic finish to disguise them as metal. The top of the display comes with that evident iPhone X-like notch that houses the tiny speaker grill, the 24 MP front-facing camera and the proximity sensor. There are no physical navigation buttons on the front of the device which means that Vivo has opted for on-screen navigation buttons. You will find the power button towards the middle on the right side of the V9 along with the volume rocker on the top of the button. 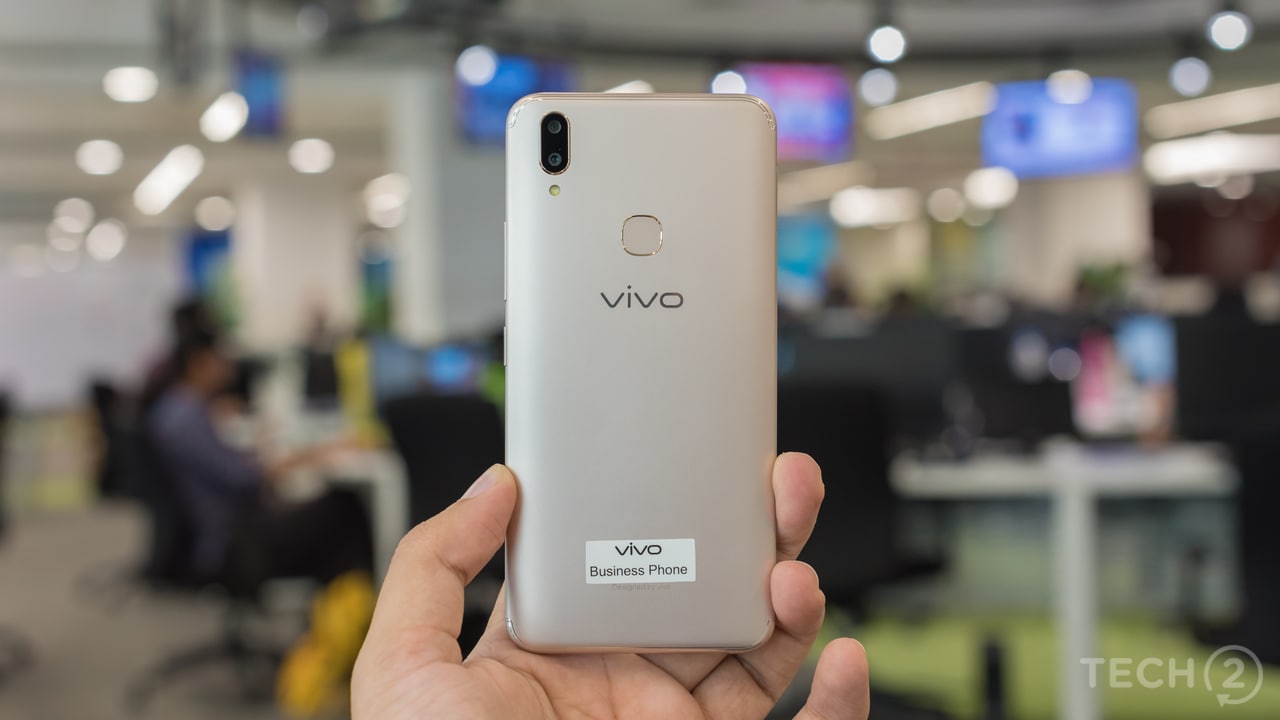 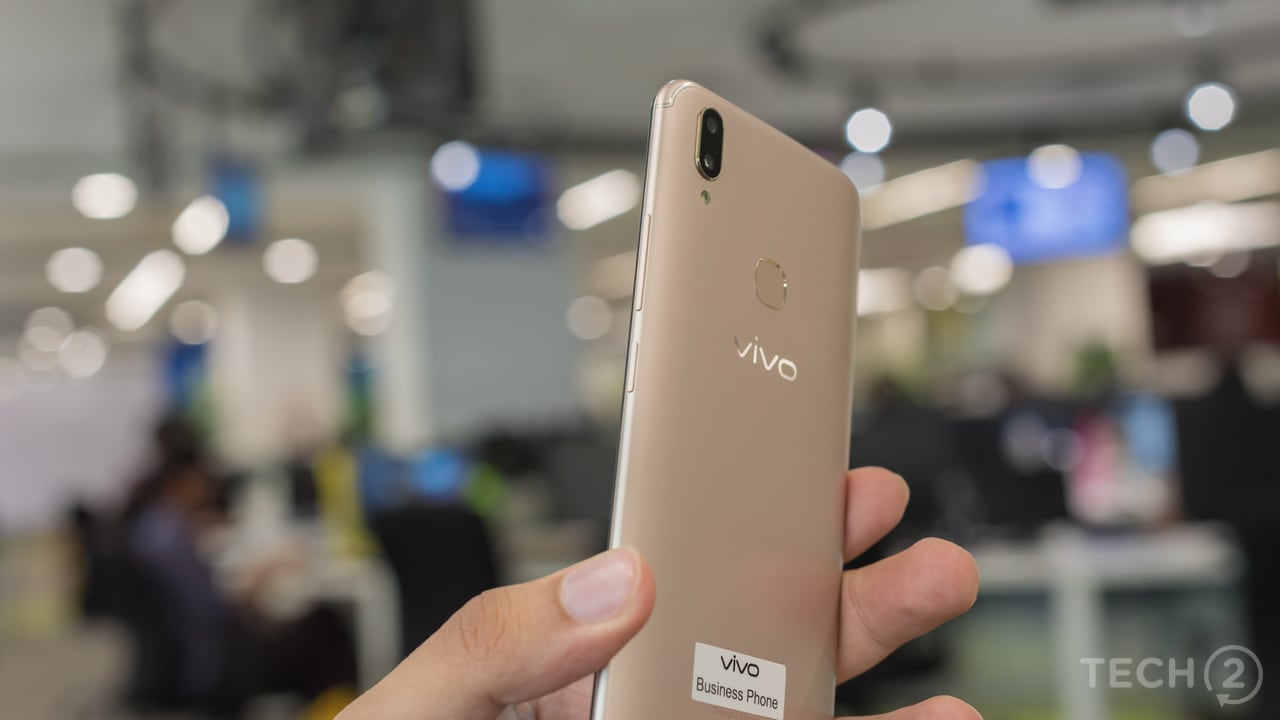 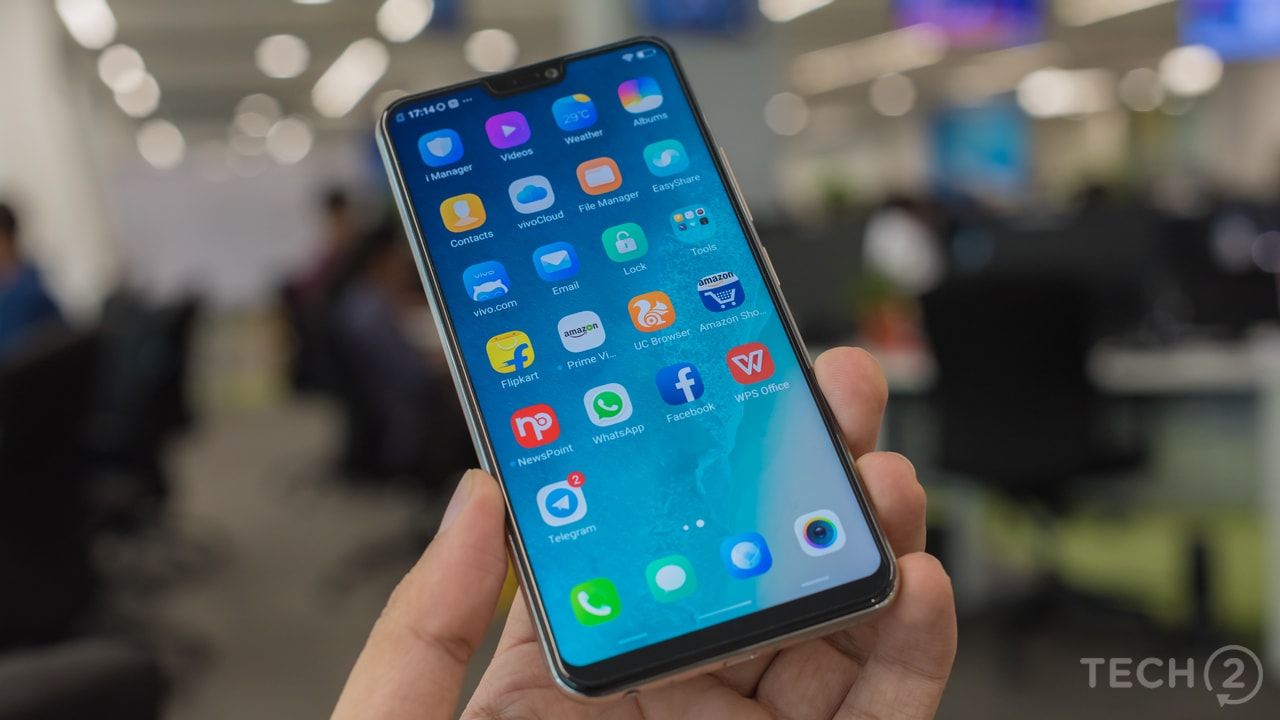 Unlike the X21 UD, the V9 does not come with an under-display fingerprint scanner. Instead, the company has opted to include the fingerprint scanner on the back of the device towards the upper half. Vivo has also added the iPhone X-like vertical setup for the dual cameras on the back along with an LED flash. The Vivo V9 feels light and sturdy in hands without making any creaking sounds, which would hint at problems with construction of build quality.

Moving towards the features, the device packs a 6.3-inch IPS LCD display with an FHD+ resolution and a 19:9 aspect ratio. The device gives users the option to add two nano-SIM cards and a micro SD card in the third dedicated slot. V9 will come with a microUSB 2.0 port, dual-band Wi-Fi, Bluetooth v4.2 and a headphone jack.

The feature set of the device is on parity with its competition from other smartphone brands that have recently been launched in the market. One hardware feature that I think is missing from the device is the lack of a reversible Type-C USB port, which is a tad bit disappointing considering that it packs in a fancy-looking near bezel-less display from 2018.

The display of the V9 is one of the highlights that will impress you as soon as you take the device out of the box. Well to be exact, not right away as you will need to switch the device on to see the narrow bezels. The company has termed its version of the bezel-less display as ‘Full View 2.0’ to signify the obvious improvement over the ‘Full View’ display that was part of most mid-range devices last year. The effect is more profound once you turn off the on-screen navigation buttons to enable the gesture-based navigation interface of the device. Vivo is boasting 90 percent screen-to-body percentage but that does not come without that iPhone X-like notch at the top. However, I did not mind the notch as much as I thought that I would. 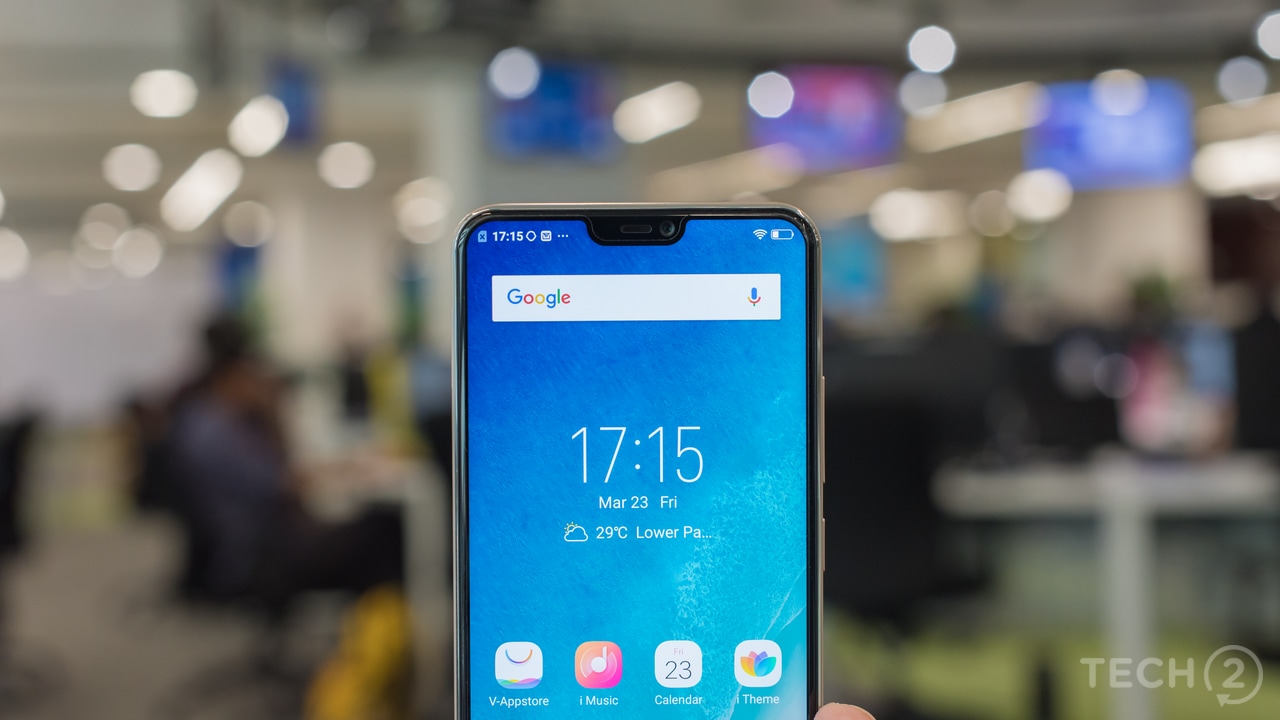 Even though I can’t comment on how good the display is in terms of visibility under direct sunlight and other finer details, the viewing angles and the colours of the display seemed fine in the limited amount of time I spent with the device. However, I found that the maximum brightness of the device to be a tad bit lacking and the brightness levels took a hit even if I slightly changed the viewing angles of the device.

The V9 packs a Qualcomm Snapdragon 626 SoC with octa-core CPU clocked at up to 2.2 GHz which is a step below the 636 found in the Redmi Note 5 Pro. With 4 GB RAM and 64 GB internal storage Vivo has added a third slot for a microSD card, supporting cards of up to 256 GB.

The Vivo V9 comes with Android 8.1 Oreo-based Funtouch OS 4.0 out of the box. Software features include AR stickers along with a Smart Split 3.0 for easy multi-tasking. The V9 also comes with AI Smart Engine, which according to the company, boosts the performance of the device by taking care of storage management and app launching and monitoring the usage of the user. Other improvements as part of Funtouch OS 4.0 include a ‘Memories’ feature that comes built into the Gallery app. It searches photos by text and the system will use image recognition to tag the photos automatically. There's also a ‘Game Mode’ to stop notifications while you are gaming, a full screen ‘Navigation gestures 2.0’ to mimic the gesture-based system from iPhone X, a ‘Global search’ across the system and ‘EasyShare’s 5G ultra-fast transmission’ which I really doubt, has anything to do with 5G. iOS resemblance is strong with this one.

The overall interface of rounded app corners along with the swipe-happy gestures and the quick settings control panel, look eerily similar to Apple's iOS leading me to believe that Vivo believes in ‘Imitation is the best form of flattery when it comes to the device’.

The device will also come with ‘Face Access 2.0’ with improved accuracy of face unlock while giving users the option to unlock apps using their face without the need to punch in any pin, password or pattern.

At the back of the Vivo V9 sits a 16 MP camera sensor with a f/2.0 aperture and a 5 MP camera sensor for sensing the depth in a vertical arrangement; again similar to the camera setup of the iPhone X. 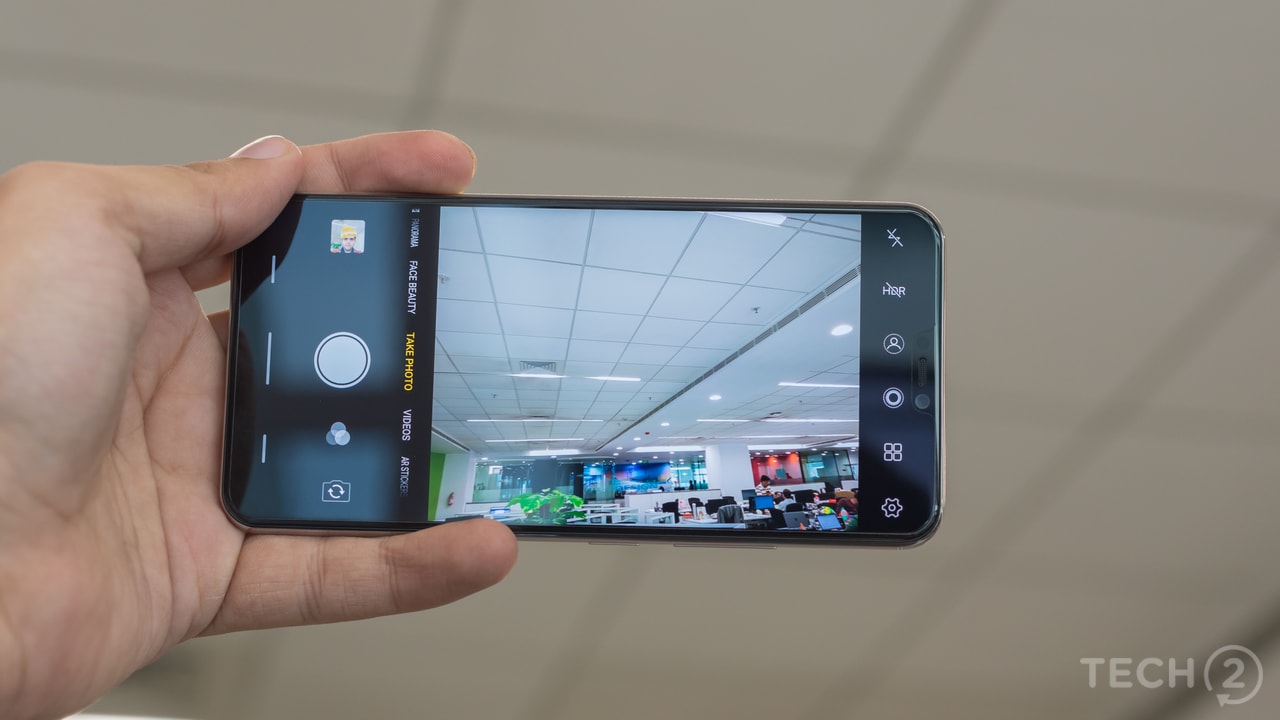 However, the highlight feature of the device is its 24 MP camera sensor on the front with a f/2.0 aperture for improved selfies. It is likely to pack a new ‘AI Face Beauty’ feature to ‘truly represent’ the beauty of its users. The company claimed that the device uses artificial intelligence to automatically detect the gender, age, skin tone, texture and the lighting condition of the environment to automatically adjust the settings of the camera, making for better-looking selfies. The camera software on the V9 comes with a number of modes including ‘Professional’, ‘Panorama’, Face Beauty’, ‘Take Photo’, ‘Videos’, and ‘AR stickers’ for the back camera and ‘Group Selfie’ in place of ‘Panorama’ mode. The front camera can also record videos in up to 4K resolution.

The camera quality of the front camera was good when compared to most front cameras in the market at the time of writing.

The device sports a ‘triple card slot’ where users have the option to add dual nano-SIM cards and a micro SD card. The V9 will come with a microUSB 2.0 port, OTG access, GPS, dual-band Wi-Fi, Bluetooth v4.2 and a headphone jack. Vivo has also added a 3,260 mAh battery to power the device with a large ‘Full View 2.0’ display.

Vivo has become the first company to introduce the first device with ‘Full View 2.0’ display in the Indian market. This design along with the good built quality is likely to give the company an edge in the market as other companies play catch-up. The influences from iPhone X and iOS are visible all across the hardware and software making me believe that this may very well be the poor man’s, iPhone X (okay, not so poor, after all the phone does cost Rs 23,000) . It is evident that Vivo is trying to differentiate itself from iPhone while pushing the envelope when it comes to its core market of selfie enthusiasts. The company continues to increase the megapixel count on the front camera and has added features such as AR stickers and Face Access this year. I still have to run a full battery of tests and spend more time with the device to write a comprehensive review but in the little time I have spent with the device it does leave me impressed, regardless of how heavily inspired it is by the iPhone X and iOS.