O’Connor and Sotomayor never served together on the high court, but they have found a common calling in advocating for civics education in schools. 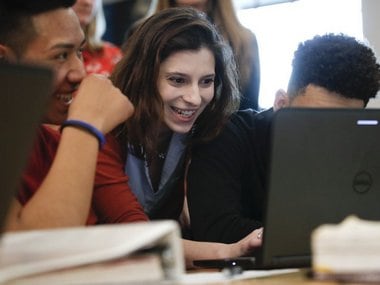 The group iCivics, which O’Connor founded in 2009 after her retirement from the Supreme Court, now has 19 computer games that were played by 5 million students last year. Sotomayor, who grew up speaking Spanish at home, joined the organization’s board in 2015. One of her first initiatives has been to try to make iCivics games more accessible to students learning English and others struggling with reading, she has said.

O’Connor and Sotomayor never served together on the high court, but they have found a common calling in advocating for civics education in schools.

“For me, civic education is the key to inspiring kids to want to become and stay involved in making a difference,” Sotomayor said at an event in September at Washington’s Newseum.

Games created by iCivics teach students concepts from how the nation’s court system works and how laws are made to how presidential campaigns work and what it’s like to be on a jury. Sotomayor has predicted iCivics “will change America” and maybe O’Connor’s “longest-lasting legacy.”

The game iCivics has updated in Spanish and is called “Do I Have a Right?” In it, players run a law firm. They listen to potential clients’ stories, decide if their constitutional rights have been violated and, if so, match the clients with lawyers who can help. The game was first released in 2011 and iCivics says it has been played nearly 9 million times.

The Spanish language update is aimed at the almost 10 percent of public school students, about 4.6 million students, who are classified as English-language learners. The majority of them come from homes where Spanish is spoken.

On a recent Thursday morning, students in Phoebe Sherman’s 11th grade US history class at Theodore Roosevelt High School in Washington were some of the first to play the updated game. The students, almost all of them immigrants from Central America who are in a class of English-language learners, spent time answering the question “What is a right?” and coming up with examples before playing the game in pairs. Some pairs chose to play in English while others chose Spanish. Some groups switched back and forth while playing. Aside from the Spanish translation, the game’s new version also includes other updates for students struggling with English: a glossary that explains legal and other terms and an optional voiceover in the English game.

“People have to know what is happening in their country,” she said.

By the end of the period, she and her partner had just eked out a winning record, with their law firm winning eight cases and losing seven. She was happy about the wins.

“I want to learn about laws and stuff so I can know my rights,” she said.

iCivics’ executive director, Louise Dube, says her organization hopes to make all of its games available with modifications for English-language learners, though they don’t yet have a timetable. Making changes to the current game cost $400,000 and they’ll have to raise money to make more games available, she said.

O’Connor, who is now 87, said in a statement that her goal is to reach every student in America through iCivics.

“To do that, we need to be able to address the needs of all learners, including those who struggle with reading,” she said. “I am delighted with the new game.”