Twitter's new labels will provide links to more information in cases where the risk of harm from the tweet is not severe enough to be removed but people could be confused or misled.

Twitter Inc will add labels and warning messages on some tweets with disputed or misleading information about COVID-19, the company said on Monday, as part of a new approach to misinformation that will eventually extend to other topics.

Twitter's new labels will provide links to more information in cases where the risk of harm from the tweet is not severe enough to be removed but people could be confused or misled, Twitter said in a blog post.

The company said that depending on the propensity for harm and type of misleading information in the tweet, warnings may also be added to say the tweet conflicts with guidance from public health experts before a user views it.

Twitter said these labels, which will look similar to ones launched to flag synthetic and manipulated media, will also apply to tweets that have been sent before Twitter's announcement and will be used regardless of who sent the tweet. Social media sites, including Facebook Inc and YouTube, the video service of Alphabet Inc's Google, are under pressure to combat misinformation that has spread on their platforms about the COVID-19 pandemic caused by the new coronavirus.

Such false claims have ranged from bogus cures to misinformation linking the virus with conspiracy theories about high-profile figures such as Microsoft co-founder turned philanthropist Bill Gates or about 5G mobile phone technology. 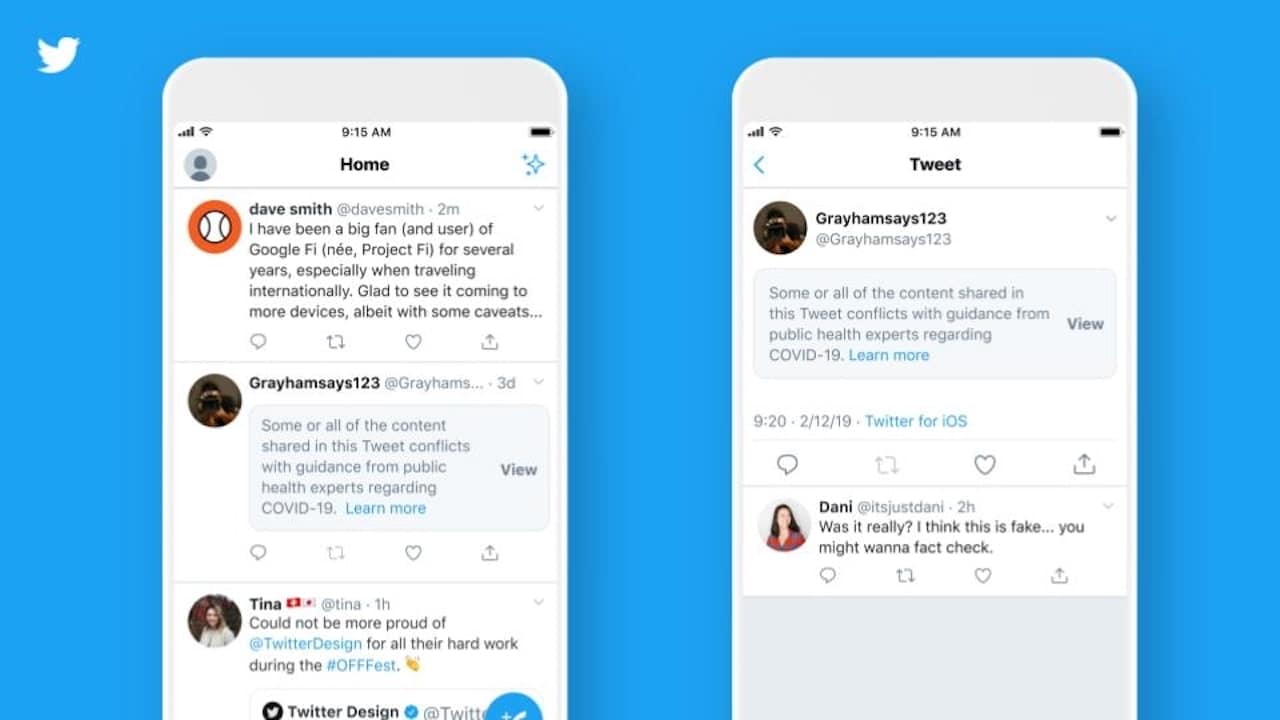 "One of the differences in our approach here is that we're not waiting for a third party to have made a cast-iron decision one way or another," said Twitter's public policy director Nick Pickles.

"We're reflecting the debate, rather than stating the outcome of a deliberation," he added.

Twitter said it would not take action on tweets with information unconfirmed at the time of sharing, but it could place warnings or labels on disputed claims, as well as those confirmed as false.

In March, Twitter banned tweets that go against COVID-19 guidance from public health authorities. On Monday, Twitter's head of site integrity Yoel Roth said in a call with reporters that it would continue to prioritize the removal of tweets with a call to action that could potentially cause harm, such as telling people to stop social distancing.

Roth said an example of tweets the company would now consider labeling would be those disputing the origin or nature of the virus.

"We will continue to introduce new labels to provide context around different types of unverified claims and rumors as needed," Twitter said.

It said it would use internal systems to proactively monitor tweets related to COVID-19 and rely on "trusted partners," such as non-governmental organizations and think tanks, to identify content that could cause harm.

Double mutation SARS-CoV-2 variant emerges in India: How should our COVID response change?