The decision was in line with Donald Trump's "America First" trade policy, which aims to protect local manufacturers from foreign competition.

US President Donald Trump has imposed steep tariffs on imported washing machines and solar panels, the first major step by his administration to protect manufacturers in the country. 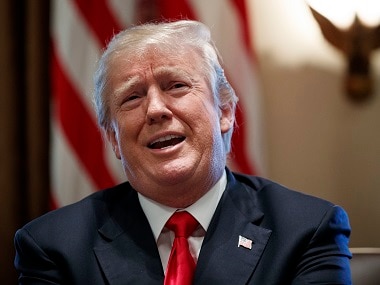 The announcement on Monday came after a year of tough rhetoric — but little action — on curbing imports of cheap products from countries like China and South Korea. Both countries will be most heavily affected by the move, the New York Times reported.

Both China and South Korea harshly criticized the action, suggesting they could take their complaints to the World Trade Organization.

The administration's decision came in response to petitions from American manufacturers who have complained for years that rising imports were eating into their sales.

It was in line with Trump's "America First" trade policy, which aims to protect local manufacturers from foreign competition.

The action was being seen as the President's most significant trade move since his decision to pull the US out of the Trans-Pacific Partnership deal (TPP) and renegotiate the North American Free Trade Agreement (Nafta).

The administration said the tariffs were largely directed at China, which over the past decade has built itself into the world's largest manufacturer of solar products, flooding global markets with low-cost crystalline silicon panels.

Beijing on Tuesday hinted it could take a similar approach.

"With regard to the wrong measures taken by the US, China will work with other WTO members to resolutely defend our legitimate interests," its Ministry of Commerce said.

The imposition of tariffs will most likely exacerbate trade tensions with other nations also and could result in an escalation of retaliatory trade measures against imports from the US.

The decision was based on the findings by the US International Trade Commission that increased foreign imports of both products "are a substantial cause of serious injury to domestic manufacturers".

South Korean conglomerate Samsung called the decision "a great loss for American consumers and workers. This tariff is a tax on every consumer who wants to buy a washing machine".

US appliance maker Whirlpool said that the tariff move would benefit US manufacturing workers.

The announcement came with Trump's scheduled travel to Davos, Switzerland, for the World Economic Forum. He is scheduled to speak on Friday before the annual gathering of corporate and government leaders.