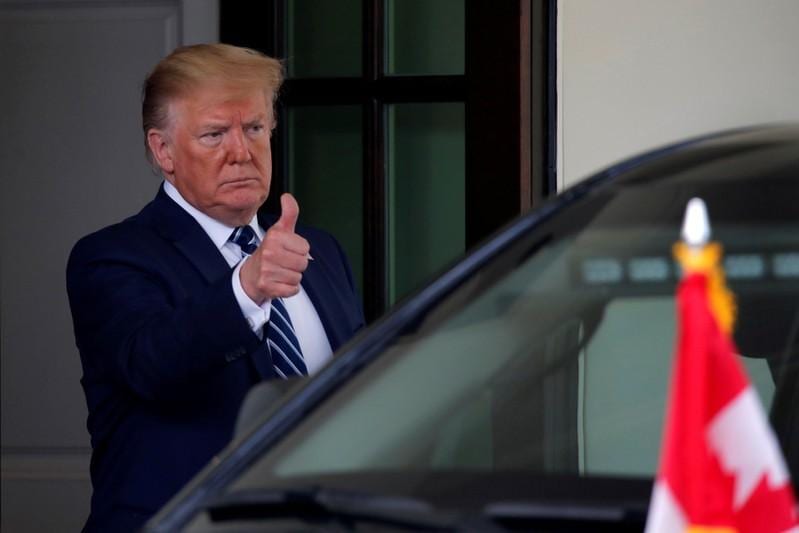 By Steve Holland and Stephen Kalin

Trump told reporters that the sanctions were in part a response to last week's downing of a U.S. drone by Iran, but would have happened anyway. He said Khamenei was ultimately responsible for what Trump called "the hostile conduct of the regime" in the Middle East.

"Anybody who conducts significant transactions with these sanctioned individuals may be exposed to sanctions themselves," the White House said.

Some policy analysts say that earlier sanctions issued under Trump's "maximum pressure" campaign are why Iran has felt compelled to adopt more aggressive tactics as its economy feels the crunch. The Trump administration wants to force Tehran to open talks on its nuclear and missile programmes and its activities in the region.

Tensions between the United States and Iran have grown since May when Washington ordered all countries to halt imports of Iranian oil. Iran says it will not be forced to the negotiating table.

"We call on the regime to abandon its nuclear ambitions, change its destructive behaviour, respect the rights of its people, and return in good faith to the negotiating table," Trump said in a statement issued along with the text of the executive order.

Iranian authorities contacted by Reuters were not immediately available to comment on Trump's announcement.

Iran's hardline semi-official Tasnim and Fars news agencies said the sanctions imposed on Tehran were based on "fabricated excuses."

"These commanders sit atop a bureaucracy that supervises the IRGC’s malicious regional activities, including its provocative ballistic missile program, harassment and sabotage of commercial vessels in international waters, and its destabilizing presence in Syria," the department said in a statement.

Trump said the sanctions are a "strong and proportionate response to Iran's increasingly provocative actions."

"We will continue to increase pressure on Tehran until the regime abandons its dangerous activities and its aspirations," he said.

Iran said on Monday U.S. cyber attacks on its military had failed, as Washington sought to rally support in the Middle East and Europe for a hardline stance that has brought it to the verge of conflict with its longtime foe.

Washington has blamed Tehran for attacks on tankers in the Gulf in recent weeks, which Iran denies. On Monday, the United States said it was building a coalition with allies to protect Gulf shipping lanes.

A coalition of nations would provide both material and financial contributions to the program, a senior U.S. State Department official said, without identifying the countries.

"It's about proactive deterrence, because the Iranians just want to go out and do what they want to do and say hey we didn't do it. We know what they've done," the official told reporters, adding that the deterrents would include cameras, binoculars and ships.

In a joint statement on Monday, the United States, Saudi Arabia, the UAE and Britain expressed concern over Middle East tensions and the dangers posed by Iranian "destabilizing activity" to peace and security in Yemen and the region.

The confrontation between Iran and the United States heated up last Thursday when Iran shot down an American drone, saying it had flown over its air space.

Washington, which said the drone was in international skies, then appeared to come close to attacking Iranian military targets, with Trump saying that he aborted a retaliatory air strike 10 minutes before it was to go ahead.

Trump said he decided the strike would have killed too many people.

U.S. media have reported that Washington launched cyber attacks last week even as Trump called off his air strike. U.S. officials have declined to comment.

Iran dismissed the cyber attacks as a failure.

"They try hard, but have not carried out a successful attack," Mohammad Javad Azari Jahromi, Iran's minister for information and communications technology, said on Twitter.

Allies of the United States have been calling for steps to defuse the crisis, saying they fear a small mistake by either side could trigger war.

"We are very concerned. We don't think either side wants a war, but we are very concerned that we could get into an accidental war and we are doing everything we can to ratchet things down," British Foreign Secretary Jeremy Hunt said.

The U.S. special representative for Iran, Brian Hook, visited Oman and was headed to Europe to explain U.S. policy to allies. He told European reporters on a phone call ahead of his arrival that Trump was willing to sit down with Iran, but that Iran must do a deal before sanctions could be lifted.

U.S.-Iran relations have deteriorated over the past year since the United States abandoned a 2015 agreement between Iran and world powers designed to curb Iran's nuclear program in return for the lifting of sanctions.

U.S. allies in Europe and Asia view Trump's decision to abandon the nuclear deal as a mistake that strengthens hardliners in Iran and weakens the pragmatic faction of President Hassan Rouhani.

France, Britain and Germany have sent an official diplomatic warning to Iran if Tehran reduces its compliance with the accord, two European diplomats said on Monday.

It was not immediately clear what consequences Iran might face for non-compliance.

Washington argues that the agreement known as the JCPOA, negotiated under Trump's predecessor, President Barack Obama, did not go far enough. Both sides have suggested they are willing to hold talks while demanding the other side move first.

(Reporting by Bozorgmehr Sharafedin in London and Stephen Kalin in Jeddah; Additional reporting by Robin Emmott in Brussels, Roberta Rampton in Washington and Parisa Hafezi in Dubai; Writing by Steve Holland, Peter Graff and Grant McCool; Editing by Jon Boyle and Howard Goller)