The announcement builds on an existing agreement under which Panasonic manufactures batteries for Toyota’s gasoline-electric and plug-in hybrid vehicles.

Toyota Motor Corp and Panasonic Corp said on 13  they are considering jointly developing batteries for electric vehicles (EVs), a partnership that could help Panasonic extend its market lead in automotive lithium-ion batteries. 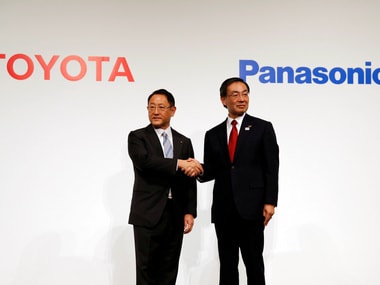 The announcement builds on an existing agreement under which Panasonic manufactures batteries for Toyota’s gasoline-electric and plug-in hybrid vehicles. Toyota said last year it was planning to add fully electric vehicles to its product line-up in a shift away from its previous green-car strategy of focusing on plug-in hybrid and fuel-cell vehicles. It has said it plans to start marketing pure EVs in the early 2020s.

Panasonic is the main EV battery supplier for luxury U.S. car maker Tesla Inc. The electronics firm commands 29 percent of the market for batteries used in plug-in hybrids and EVs, showed Nomura Research data for the first half of 2017.

Panasonic sees batteries as central to its plan to nearly double automotive business revenue to 2.5 trillion yen ($22.05 billion) by the year through March 2022. To that end, it has been expanding battery production capacity globally.

It started mass production of battery cells at Tesla’s “Gigafactory” in the U.S. state of Nevada earlier this year and plans to follow suit at a new plant in Dalian, China. It is also adding new production lines in Japan.