Astronauts Ricky Arnold and Drew Feustel and cosmonaut Oleg Artemyev will blast off in the Soyuz MS-08 spacecraft at 1.44 pm for a two-day ride to the ISS.

A Soyuz rocket carrying two NASA astronauts and a Russian cosmonaut is all set to blast off from the Baikonur cosmodrome in Kazakhstan to the International Space Station (ISS) on 21 March. 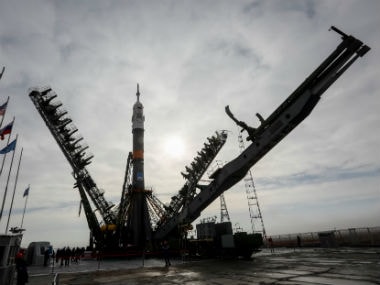 The astronauts Ricky Arnold and Drew Feustel and cosmonaut Oleg Artemyev will blast off in the Soyuz MS-08 spacecraft at 1.44 pm for a two-day ride to the ISS, the US space agency said in a blog post.

The space travelers will dock to the orbital laboratory's Poisk module on Friday at 3.41 pm.

The Expedition 55 crew has also reconfigured the JEM Airlock in support of an upcoming experiment: Materials on ISS Experiment-Flight Facility (MISSE-FF) payload operations.

The study exposes sample plates containing a variety of surface materials to the harsh environs of space outside the station for varying durations.

Three people will leave planet Earth tomorrow for a journey to humanity's orbiting laboratory - the @Space_Station. Tune in live at 12:45pm ET to watch their liftoff. Details on their mission: https://t.co/LNNjhA4SQT Have questions? Use #askNASA pic.twitter.com/z0XKBe8i0a

Data collected will inform satellite designers how different materials can degrade over time, a topic of great importance when it comes to designing and building spacecraft and structures to withstand a journey through the cosmos, NASA said.

Feustel and Arnold will also prepare for a spacewalk on 29 March while familiarising themselves with space station operations.

It will be the 209th spacewalk in support of space station assembly, maintenance and upgrades, the seventh in Feustel's career and the third for Arnold.

They will also work to install wireless antennas on the Tranquility module and replace cameras on the Port-1 truss structure.