Threats associated with cyberspace have thrown up a new set of challenges for countries: Sushma Swaraj

The minister said the internet thrown up new set of challenges for which there are "no preset solutions".

Cybersecurity has taken centrestage of discussion at global forums as the borderless nature of internet and anonymity of threat actors has heightened the need for closer cooperation among nations, External Affairs Minister Sushma Swaraj said. Speaking at the closing ceremony of the Global Conference on Cyberspace 2017, the minister said internet has not only expedited the pace of political, social and economic growth, but also thrown up new set of challenges for which there are "no preset solutions". 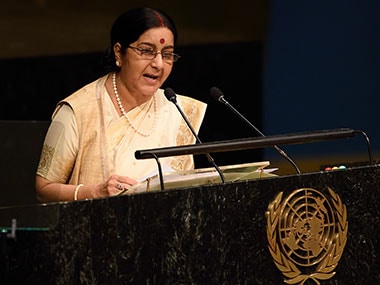 "The lack of borders in cyberspace and the anonymity of the actors has ensured that the traditional concepts of sovereignty, jurisdiction and privacy are challenged...The global community — which has so far benefited from cyberspace — is beginning to wake up to its threats," she said. Swaraj asserted that India is committed to an open, safe, inclusive and democratic internet that responds swiftly to challenges.

Highlighting the growing concerns around cybersecurity globally, she said there is hardly a meeting between the heads of states where discussions on such issues do not figure. "It points to the growing penetration, significance of internet on the social, economic and cultural lives of the nations. The linking of devices and growing Internet of Things (IoT) has made cyber issues a critical aspect of cybersecurity and development politics," she added.

While "peaceful" uses of technology have fuelled growth of economies and connected citizens globally, cyberspace is also infiltrated by malicious actors looking out for opportunities to exploit the vulnerabilities, Swaraj cautioned. "The anonymity, borderless spaces and speed has helped these elements to carry out nefarious activities ranging from cyber espionage, concerted attacks on networks, data theft, infringement of privacy, extremist propaganda to name a few," she pointed out.

Crime syndicates and terrorist organisations are leveraging malicious tools in cyberspace to carry out complex crimes, posing considerable challenge to the law enforcement agencies, she said, urging nations to come together to counter this growing threat. Swaraj said there is a greater need for countries to enter into agreements and arrangements for cooperation at various levels. Speaking at a previous session, National Security Advisor Ajit Doval urged global security organisations to enhance cooperation and look at evolving cyber-related security structure to counter the threats in cyberspace.

He warned that advent of new technologies like artificial intelligence and robotics could compound the complexities of cyber threats. "It may also be necessary that security organisations of the world will need much greater cooperation and specific cyber-related security structure for fast sharing of information, identifying defaulters, proceeding against them and supporting to law enforcing agencies," he added.