This is the $500 flamethrower from Elon Musk’s The Boring Company; available on pre-order now

The company is not only selling a flamethrower but in addition to that, it offers a $30 branded fire extinguisher for “exorbitant amounts of money”. 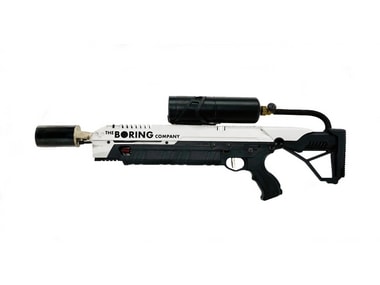 Musk officially announced the launch of the latest when he posted the image of the flamethrower on his Instagram account. The company has priced the flamethrower at $500 instead of the previously rumoured $600 without shipping or additional taxes.

The company is not only selling a flamethrower but in addition to that, it offers a $30 branded fire extinguisher for “exorbitant amounts of money”. The product description goes on to add that anyone looking for a fire extinguisher can get it at less price anywhere. According to the product page on the website, the flamethrower will start shipping in spring.

Say hello to my little friend …

What is interesting about this fact is that Musk announced the launch of the product on Christmas when he added that the company is planning to launch a flamethrower after it sold 50,000 hats. It was quite unbelievable for most that Musk and The Boring Company in extension will start selling a flamethrower.

Last but not the least, it may be a concern for people that is it legal to own a flamethrower. Musk took to Twitter to reply to the question from famous YouTuber Marques Brownlee to add that it is “A-ok” as per the guidelines from The Bureau of Alcohol, Tobacco, Firearms and Explosives (ATF) in the United States.