An object appearing to originate from elsewhere in the Galaxy is passing through the solar system. The object is believed to be an asteroid or comet, an interstellar visitor from another system, and measures about 400 meters across. Telescopes around the world are halting their planned campaigns to observe the object, to find out the composition and origin of the object. If confirmed that it is an interstellar visitor, it would be the first object of its kind. The asteroid or comet has received the temporary designation of A/2017 U1 as the International Astronomical Union still has to formulate a convention for the nomenclature of this newly observed category of objects. 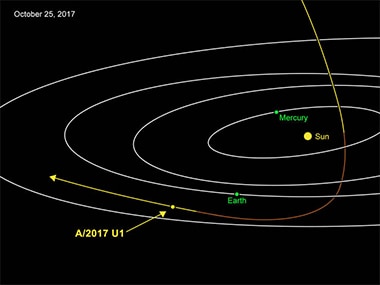 Astronomers have calculated the trajectory of the object both backwards and forwards in time. It appears that the object traveled to the solar system from the direction of the constellation of Lyra, and entered the solar system almost directly above the plane of orbits of most of the planets. Although such objects were suspected to exist, this is the first time that one such object has been directly observed. The object was discovered by the Panoramic Survey Telescope and Rapid Response System (Pan-STARRS) 1 telescope in Hawaii on 19 October, during its nightly scan of near earth objects. The telescope has previously detected asteroids with a comet like tail, and a small asteroid that flew safely past the Earth earlier in the month.

Rob Weryk, a researcher who was the first to spot the moving object, says "Its motion could not be explained using either a normal solar system asteroid or comet orbit. This object came from outside our solar system."

The astronomers noticed that the same object was captured in the images obtained in the previous night as well, but the automatic moving object detection did not flag the asteroid or comet. The object is moving at a tremendous speed, of around 44 kilometers per second and its trajectory has made it slingshot around the Sun, back into the depths of space, towards the constellation of Pegasus. It is highly unlikely that the object will visit the solar system again.

The trajectory being followed by the object is very close to an interstellar spaceship from aliens in the book Rendezvous with Rama by Arthur C Clarke. The object in the book was a probe that scouted out planets with intelligent species, and was a habitat enclosed in a hollow tube, a type of spaceship known as an O'Neill cylinder.