Samsung’s new 360 camera houses 17 cameras, six microphones and can shoot and stream 360-degree videos in 4K VR at 30 fps (per eye), provided you have the bandwidth of course. 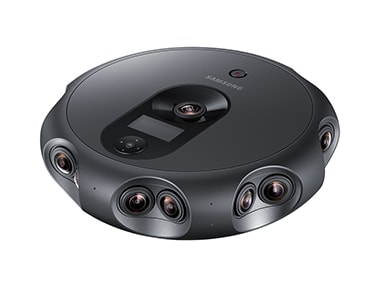 It’s not just the number of cameras and the price that is staggering, the internal hardware could put many a decent PC to shame, and rightly so. First, the Round 360 houses 17 cameras with 2 MP sensors and an f/1.8 aperture. These cameras are mounted in pairs around the device, with one camera on top. They’re mounted in pairs to enable VR video recording. As mentioned earlier, six internal mics are included and there’s support for two additional mics. For handling all of this data, you get 10 GB of RAM and 40 GB of internal storage. That last can be expanded with an SSD (up to 2 TB) or an SD card (up to 256 GB).

The entire device weighs about 1.93 kg and can connect to a PC via LAN or USB Type-C. If that wasn’t enough, the device is IP65 rated, meaning its weatherproof, though not necessarily waterproof. An IP65 rating means that the device is sealed against dust and low-pressure water jets, but not immersion in water.

The device will be available in October in the United States. A rollout in other markets will follow soon after.